REVIVE's Simon Hall answered the questions fired at him by Tony Cummings. 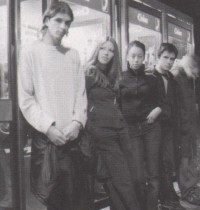 Tony: Cross Rhythms is used to interviewing bands rather than churches. Can you give me a history of Revive?

Simon: Revive was originally the name of a youth worship event at Moortown Baptist Church in Leeds in the early 1990s. I was the youth pastor and happened to be into a lot of the indie music that was out at the time, and that made a connection with the local young people, especially when we started doing stuff like having local bands nights and writing worship music in that style. In 1995 the core members of revive began to meet on Sunday nights on the top of a hill that overlooks the city to pray, and by the summer we felt pretty sure that God was asking us to share what we had with the city, and not just our neighbourhood. We went to the leadership of the church and after two years of prayer and planning, Revive was born in the autumn of 1997. Moortown is in the suburbs of Leeds, so we had to move en masse into the inner city where the majority of young, single people were. By this time, most people who were involved were in their late teens and 20s and that remains the group that is finding a home with us. We meet in a big old house that my wife Anna and I bought as a ruin and renovated, knocking two ground floor rooms into one, and also once a month in a local pub, which has a basement for gigs. The music and worship thing is very important to us, but just building a strong community through cell groups and trying to find new ways of reaching out to our community are just as vital.

Tony: I understand you released some music independently before 'Neither Work Nor Leisure'. When and what was that?

Simon: Well, we did have the Christian equivalent of a major label release: 'Beautiful Day' which came out on Word the same day they released Maire Brennan's album in 1998. 'BD' is an amazingly beautiful album of long, lazy, ambient and trip hop, with some excellent lyrics and the odd shock as well. I'm still very proud of it, even though it bombed. In retrospect, I think it was an indie album, and Word didn't quite know what to do with it. It reflects the other side of who we are, the technological side. 'NWNL' is obviously much more basic, it's the sound of a band in a basement (literally). Our hope is that if we get another chance at making an album we'll have time to bring the two elements together...

Tony: Tell me about the singers featured on 'Neither Work Nor Leisure'. Who are Lisa Cutcliffe and Corinne Bailey and is Justin Thomas, famous rapper of this parish, a member of Revive?

Simon: Yeah, Justin's actually part of the leadership team of the church. He continues to work as a lyricist with Zarc Porter and is trying to bring material together with Zarc and Stephen, the guy who did the programming on 'Beautiful Day'. He's been looking at opening a bar in the city centre and we'd really love that to come off. Revive has an embarrassment of riches when it comes to musicians. About a year ago we had a meeting of all the musicians who were involved in worship in Revive and we had 30-something. At that time we only had about 40 people coming on a Sunday night! God has given us so much blessing with talent it's difficult to know how to channel it. Lisa is a student at the university who has made worship leading her top priority and we have tried to teach her all we know on top of all she knew already. As you can hear on the album, her voice has an almost supernatural range. Corinne (who sang lead on 'BD') is a Revive old-timer, being part of the youth group at Moortown. She sings a lot of jazz in bars and clubs around Leeds and fronts a band called Helen. She's a worship leader in the free-form Kevin Prosch style, but right now she feels her call is "out there".

Tony: The songs have a definite ambient vibe to them and would I imagine be quite difficult to sing. Do people sing along with them at a Revive meeting or do I have an outmoded view of what constitutes worship?

Simon: We certainly try to make sure that singing and worship aren't exactly the same thing, but we do quite a lot of singing. There are one or two songs that were written specifically for the album that I guess we see as more for listening to than singing, but even "Constant", the last track, emerged as a kind of round, where the same few chords are repeated but you can sing all different lines and melodies on top of it. That last track probably reflects the best of what might happen in worship at Revive: the music is playing and God is leading people to sing all kinds of stuff which miraculously sounds beautiful rather than naff. I know it's not new, it's just that the music sounds like Radiohead rather than Glenn Campbell. The songs that are about really struggling and doubting we probably wouldn't use for collective worship (although we might have a solo), but that's what we said about the really angry track on our first album, and that's now a staple. Incidentally, the record company removed a heavy track off the album to make it more consistent... I think we'll try to make a more happy/angry/aggressive/praising album next time!

Tony: What do you think the national Church will make of 'Neither Work Nor Leisure'?

Simon: To us it sounds quite mainstream, especially with the acoustic the dominant instrument throughout. But I think we slew it just enough that musically we're able to say something new and reach people that don't normally listen to worship music. Lyrically, we are still trying to be open before God and that means there's a bit of pain as well as joy. Judging from the emails we got from people who got hold of the first album, that's something a lot of people cherished. If having a more inviting musical style makes that lyrical vulnerability open to more people who might be blessed by hearing it, then I think we can consider it a job well done.

For more on Revive visit the Revive artist profile