The subgenre of Southern rock - that appealing fusion of rock, country and blues - which since its inception in the Southern states in the '70s with bands like the Allman Brothers and Lynyrd Skynyrd through to today's acts like Black Crowes has shown a surprisingly resilient refusal to die. In Christian circles as well, of course, Southern rock has proven a favourite with acts like Maylene And The Sons Of Disaster and CCM best sellers Third Day often revealing their Southern rock influences. Now a new act has emerged which, judging from the buzz they have created even prior to the release of their album debut, will soon be enjoying a big fanbase. The Rhett Walker Band have just released their debut album 'Come To The River' on Provident Label Group's Essential Records (Authentic Media in the UK).

Talking about the message behind 'Come To The River' Rhett was particularly outspoken. "There's just nothing we can do without grace; we're all dirty, messed up people, but Christ still loves us. So there's two things we must do. One: rejoice, because now we have a purpose on this earth - to share that grace with others. Two: take up the calling. You can't just take that love and not tell the story that goes with it."

Rhett, full name Rhett Walker Canipe, spoke to Christianity Today about his early history. "My dad's a pastor, and we'd just moved to South Carolina, and it was like starting over. I was young and dumb. You know how it is when you're 16. You're just getting your licence and things are starting to go smoothly. Then I just went crazy. I started messing in stuff I didn't need to. I got expelled from my high school. I had to go to this Christian school down the road. All along my dad is a pastor at this new church, and people are like, 'How can you lead a church if you can't even raise your family?' So I get to this new school and, same thing: living life like I wanted to, messing with drugs. Next thing you know, my girlfriend's pregnant. That was the moment where it was like, 'What have I done? This is forever.' I didn't know what to do. I told my dad, and he said, 'Now's the time to man up. No matter what happens, you'll forever take care of this girl, and you'll forever take care of this baby.' I told April, who was my girlfriend and is now my wife of eight years, 'We've done everything wrong that we possibly can. Let's try to do it right from here on out.'

"We were 17 and had to get our parents to sign off to get married. We went before my dad's church, walked right up front and told them what was happening, that we're expecting a baby. They ended up throwing baby showers on their own dime. So we were able to see the way a church body is supposed to exist, with brothers and sisters helping each other. The church could have easily turned their back on us. But they really jumped in there. I was seeing firsthand that Christ does love me. I've done everything possible to screw it up, and he's still there to help me and protect me, and now he can help me raise a family as a 17 year old." 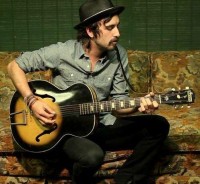 Rhett had always shown an interest in music. He began to play drums in his father's worship band then his wife April began encouraging him to sing. He remembered, "So I started singing and leading worship. After months of doing that, I started getting opportunities to lead worship other places. God was just opening doors, and we wanted to do whatever he asked. I was happy doing Passion covers and Hillsong songs and stuff like that, but from what I'd seen and the kind of life I'd lived, I felt like I had a story to tell with what Christ has done in my life. So I started writing songs and pursuing music. I felt like God was pushing me toward Nashville, so I did the easy cop-out and said, 'Well, I'll pray about it.' The next week my mom called me and said, 'You ever thought about moving to Nashville?' Two weeks later we were in Nashville. We've been here four years now."

In Nashville Rhett formed the Rhett Walker Band with guitarist Joe Kane and drummer Kenny Davis. The songs that were to form the basis of 'Come To The River' began to take shape. He explained, "I've loved covering Passion songs as a worship leader, but I feel like some of the crazy things I've done and need to sing about don't always fit that mould. So I want to write music that isn't really congregational worship but still inspires a movement that champions what grace really is." It wasn't long before his music won independent songwriter contests and gained the attention of Essential Records. Helped by the contributions of co-writers like Jason Ingram, David Leonard (of All Sons & Daughters) and Steven Delopoulos (of Burlap To Cashmere) 'Come To The River' delivered a no-holds-barred defence of God's absolute truth. Rhett boldly stated, "I'm headed to conquer. I want this to be a movement. We have all these other people in the world with non-Christian beliefs that aren't scared to speak their minds. They don't hide behind anything; neither should Christians."

Not that Walker's debut album lacks compassion for people who don't think like him. One song on the project which is already attracting critical attention is "Brother", an introspective worship duet with David Leonard. Built upon a mournful steel guitar and escalating toward eternal hope, they sing about how we're all beggars and thieves in need of the very same grace. Said the singer/songwriter, "I'm someone living my dream through the grace of God. I'm blessed with a beautiful wife and two children who have walked with me every step of the way. My faith, my family and my country are the most important things in my life. 'Come To The River' tells all that."