One of the coolest new R&B gospel albums comes from a teenager from California called RICI. Mike Rimmer reports. 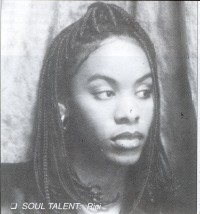 It's a cold February afternoon in 1997 and the Church Of God Of Prophecy in Nechells, Birmingham is resounding to the coolest of vibes. The temperature may be more than cold but the vibe is red hot. Beresford Dawkins, promoter of the Midlands' premier Gospel event The Well, is watching intently as the British backing band he has brought together to back American outfit God Quest rehearse music from the set.

God Quest were the first rap artists to play The Well and accompanying the duo on this trip is a 17 year old singer from Fresno, California. Rici Bell and her mother sit shivering on a pew whilst Marcus Davis and Jacob Luttrell rap and sing. She's a long way from home and at that time she is still in the process of recording what would become her debut album, the groovy soulful 'So Into You'.

We decamp to another part of the church and huddle together in the pastor's office to record interviews for radio and chat about the brief yet startling career of this talented teenager. There is much laughter as Rici demonstrates her ability to take off an English accent! Davis, her producer and mentor, asks for a copy of the tape, which I give him. Eighteen months later when I hear the album, I discover to my surprise that a couple of snippets of the interview appear on the recording and thus my dulcets become forever wrapped up in Rici's debut recording!

Perhaps we shouldn't be surprised that Rici has gone so passionately into music. She describes her family situation in a matter of fact manner, "My family is heavily involved and familiar with the entertainment industry. My parents were in music bands growing up; one of my older brothers is a producer and had a song on a major motion picture. Also my uncle is currently performing the Broadway musical 'Showboat'; and his son, my cousin, has appeared on several television shows."

Raised in the church, Rici became a Christian when she was 12. But she was singing long before that, as she remembers, "I was involved in the church youth choir, talent shows and various plays." When she was 14, Rici signed a recording deal with a secular company and began recording. She explains, "I had three or four songs already recorded when I decided that I didn't want to share this message with the world. Instead, I wanted to share the Gospel and the greatness of God."

Very determined, Rici prayed for God's guidance and discontinued the secular project. Today she reflects, "Even though I turned down videos, loads of money and the opportunity to sing with a lot of popular artists, I knew God had something better for me. Ever since I dedicated my gift to the Lord, many doors have been opened."

One of those doors was to open up for God Quest, which put her in touch with Marcus Davis who also runs Devaness Records. Marcus recalls, "She always stood out at the shows, she was the little girl with the big voice. I had some songs we were ready to record and God put it on my heart to have Rici sing them." Rici is clearly being mentored by Davis, as she says, "All I did was sing, and he did everything else!" Rici's first time in the studio was an extraordinary experience. "I just froze, I couldn't seem to get it out," remembers Rici. "It was real, there was no turning back. I was overwhelmed and I knew in my heart that this was my way to express to the world what I could do with the gift that God had given me."

She continues describing her memories of making the album, "Every day in the studio was memorable for me. The only thing that really sticks out is the many times I came directly from school to record and in between studio sessions I would try to do my homework or study for an exam. I was still in High School at the time. Also Marcus's wife, Andrea, would always 'stuff our tummies' with delicious food. Mmmmmmm!"

Running through some of her favourite songs from her debut, she chooses "Groovin" because of its "relaxed, laid back melody rich is easy to catch on to." About the straightforward worship of the slow burning "Lift Your Hands" she comments, "It simply reminds us to lift our hands, raise our voices and PRAISE GOD!" The first song completed for the project was "Praying For You" which Rici recorded on her 16th birthday, and England witnessed the first song she performed live from the album. "All Because Of You" deservedly received a great response at The Well.

So would she like to come back to England again? You bet! "Words cannot describe what my visit to England meant to me" she enthuses. "The place and people are INCREDIBLE! Meeting with that fantastic band in Birmingham was a blast! It was also great to experience a new culture. Even walking down the street and not seeing any trash on the streets was surprising. Over here in America, there's trash everywhere! I immediately fell in love with the accents and lifestyles of the people I met."

Away from music, Rici recently enrolled at Fresno Pacific University, a Christian college close to home. Even with a hot R&B debut album in the racks, Rici keeps her feet on the ground combining a hectic schedule of church commitments, performances, college work, a part time job and more recording. Phew! Even with all of that, I doubt if it will be too long before she makes a trip back to visit Britain and I, for one, can't wait.

WHERE CAN I GET A COPY OF YOUR CD
HAD ONE YEARS AGO BUT HAVEN'T BEEN
ABLE TO FIND A COPY OR ANY OF THE
SONGS....VERY GOOD MUSIC!!! THNX

I need your so into you Cd. I want anything new also. R&B, Gosple, jazz, etc... You voice is awsome! Contact me, please!