Rob Ash: The Welsh singer, songwriter and much praised guitarist talks about his life in music.

A flow of albums for Chapel Lane has built up grassroots support for rock gospel journeyman ROB ASH. He spoke to Andrew Long. 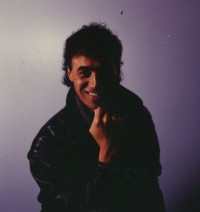 Rob Ash may be a new name to many Cross Rhythms festival-goers this summer, as well as to many of our readers, but he's been out there on the well-trodden circuit of church halls, youth clubs and prisons for more than 11 years now full time. His melodic blend of pop and R&B-tinged rock goes down well with both young and old. I met with him recently to talk about his life, his music and his current album 'Right Now'.

Although Rob was born in Bridgend his father's family was from Ghana, which gives Rob what he describes as "an original tan". His mother was Welsh and Rob has always lived in and around the Bridgend area. Rob started to play guitar quite late, at the age of 19 and describes his early influences as being mostly 60s blues artists like John Mayall, early Clapton, Peter Green and the Stones. Ash joined a band which did well on the blues club circuit, eventually going full time and making a few appearances at the Marquee. I asked Rob why he hadn't pursued that avenue.

"After I got married," said Rob, "my wife invited me to the local church one night, which was horrendous for me at that time, going to church, but we kept going and it kind of got to me after a while. I realised there was something in it. I became a Christian and I've been a Christian now for about 17 years."

Rob began to devote his songwriting talents to God, a move which eventually led to him becoming a full time Christian artist. 60s blues is less of an influence on his music now than in the early days. His more recent material has a contemporary pop feel and besides his solo work he is also a member of jazz influenced BYFC band Filament. I asked Rob how they came to work together.

"Filament spotted my many talents!" laughed Rob. "We met at Cwmbran actually. I was doing a solo thing with Dave Bilbrough and Filament were backing him. They asked me if I would be interested in getting together with them for some things, so we got together and eventually made a couple of albums. One of the members left the band so there's only four of us left now. We've worked on and off for the last few years on various things, tried to be as flexible as we could - Spring Harvest have had us as a worship band. We've tried to flow with what people have wanted us to do, which isn't very easy when you're in a band but it's worked out pretty well. But I think the solo work is more important for me because with Filament we don't work consistently together. We did at one time, but even then I was still doing solo stuff. My main thrust is as a solo singer and songwriter."

Rob considers evangelism and ministry to be a major part of his work. "I think that wherever I go obviously my main aim is to tell people about Jesus and communicate the gospel," Rob told me. "It's strange, you know, people tend to look at musicians and think that you're only up there to do a musician's job, but if you keep your eyes on your ministry you end up realising that that's where it's at."

Although he has always operated at grassroots level Rob does have ambition to go on to bigger things. "Well, the Bible talks about having good success," said Rob, "and I wouldn't say there was anything wrong with that. The hardest part about success has to show the people you come in contact with that you're a Christian in whatever circumstances you're in. If you have a musical ministry, that's fine, but I think people have to recognise that sometimes there's not a lot happening in Christian circles and it's very tempting to get into other things as well when those opportunities come along. If someone offers you a TV show or a radio programme or a single I suppose nobody, if they were honest, would turn that down. I know evangelists and preachers and pastors who are very successful in their business, some of them very rich and well off. Do we say that because they're successful in that we shouldn't be successful in our music? They have contacts with non-Christian people in other areas and I think it's time that we blew this idea away and realised that so long as you keep Christ at the centre of your life that's what really matters. He'll guide you, and if you go in the wrong direction he's not unable to help you out and pull you back."

The current album 'Right Now' sees Rob stripping away all the additional musicians and presenting us with a straight acoustic set. A lot of artists are putting out "roots" material now so what was Rob's purpose for the new album? "I enjoy playing acoustically more than anything," said Rob, "and I just wanted to do an album with no sequencers, no drummers or big production, just do a couple of songs that I like. Actually I'm quite pleased with the way it's come out and I hope people take it for what it is, no sequencers or strings or anything, just me on guitar and a friend backing on the vocals. I've always wanted to do that. When I travel I sometimes use backing tapes, but I always try and make sure that I put my guitar in tune with it and play along with it rather than just use the tape. I feel better that way because if the tape snaps I can carry on and prove to people that I really am playing."

Rob sees himself continuing his music ministry all his life, whether on stage or in church, and looks forward to being able to phone up his old mate Ray Bevan for a jam session when they're both in their 70s!

Hopefully his Cross Rhythms festival appearance this year will give Rob some more well deserved recognition.