Coventry singer/songwriter ROB HALLIGAN went to New York to film a video though the journey was much more significant than the standard publicity shoot. Mike Rimmer went with him.

He remembers, "For nine months, I lived with them and got everything out of them that I possibly could without paying them anything. After nine months I felt very guilty about this and I confessed to them something that the police were after me for. So one of the guys from the church came down to Worthing with me and he spoke for me in court. The judge was so impressed with what he had to say and where I was staying and everything that they gave me community service order, which transferred it from Worthing up to Northampton so that I could stay with the church."

He continues, "I was with them for nine months and I realised these people weren't in it for any money that I'm giving them because I'm not giving them any money. They're not getting anything out of me! I felt guilty but I decided to give God a try. I needed some money and I needed a coat and I wanted to see all my friends. So I prayed, 'Well, I need some money. If you're there, give me some money. And I need a coat and I need to hear from my mum because I haven't heard from my mum for ages.'

A few moments later, some friends arrived to take him out so he went outside and got in the car. He remembers, "They said, 'Oh, we've had a package delivered,' and they gave me this package and I opened it and it was from my mum! And it was a coat and a cheque for Â£50, saying that she thought I might need some money! That was totally unexpected and it blew me away a bit. So I thought, 'Okay God.'" And that was where his spiritual journey began.

Today we've travelled to Battery Park, on the south side of Manhattan, for a full day's filming around the corner at the bottom of the Wall Street district. While we're waiting to set up I amuse myself by interviewing an Hispanic guy dressed up in a Statue Of Liberty costume who is making money from tourists posing next to him. Very strange!

But not as strange as this! There are two Rob Halligans making Christian music. The first is our English version whilst in the USA, there is Bob Halligan Jnr who leads a band called Ceili Rain and it seems fitting that the American version has agreed to appear in the video! He shows up, guitar in hand ready to play the character of a busker. 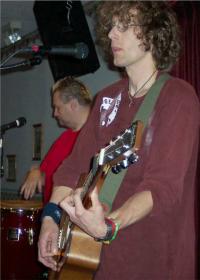 The film crew are getting ready for some complicated shots so Craig Dobson the director busies himself getting the crew organised. His cameraman Brad Corbelli keeps us amused. Today Brad is also playing the part of a New York cop who moves the busker along however it has to be said that his costume is pretty pathetic. I tease him that he looks more like a chauffeur than a cop! However as he rehearses with the American Halligan, he adopts the role of an Irish cop with the result that both of them keep breaking down in laughter. In the end, it works well and everyone is pleased!

Just across the road from where we're filming, in Battery Park, there's The Globe, which is what is left of a sculpture that used to stand in the World Trade Centre Plaza. It was rescued, battered, punctured and broken and moved to the park as a temporary memorial for the dead. Rob and I stand silently looking at it, the whirr of tourist cameras the only noise to distract us. I ask him whether the passage of time makes it any easier, "It's probably more emotional now," he admits. "I think then, I felt a numbness and there were so many unanswered questions; and there still are. There's been a lot of laying things to rest that has happened. But, being here and at Ground Zero is almost like coming to visit a grave now."

He muses for a moment and then adds, "Healing does take place but there is always a pain of loss when anybody dies, especially in horrific circumstances. I've got some good memories of dad but there's always a kind of pain of what happened. I don't think that can, or should, go away."

His faith has helped, "God has shown me parts of my own life where perhaps I thought I was a Christian and I haven't been. He's gently corrected me saying, 'This is how I've said to live, and said to react and said to deal with these kinds of situations. I want you to bring these things to me. Can you do that?' And I've realised how little I have done that in the past, and how much more I do now." 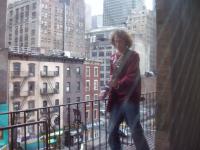 The gaping hole in the New York skyline is a permanent reminder of what happened in the city. We now live in a post 9/11 world where things have changed forever. I observe that it must be difficult for Rob to ever escape from reminders of his personal loss. He reflects, "I think it works in two ways. I have the sensitive, personal things where, especially if you're not expecting things to come up, it kind of hits home and it does stir things up. And then I also have to be able to talk about it and detach myself from it and analyse the situation and be very matter-of-fact about the whole thing. Because when you want to express what you've discovered, what God has been saying to you, how you've been working things through, you need to come out of the situation and look in and say 'Look, this is what's happened.'"

He observes, "I think where that crosses over is when I'm performing live. I tend to have a little bit of both because the songs are so personal and emotional. So I can share between the songs and talk about the songs and explain what they're about, and be very matter-of-fact and sing it. And occasionally, I'll have to go straight into another song because I couldn't possibly carry on talking because I'll be too choked up after that."

After a week in New York, it's the final day and we're shooting the interior shots before we dash across the city to fly home. We're in a studio complex in the theatre district just around the corner from Broadway and Carnegie Hall. Rob is perched looking moody and rock'n'roll in a window strumming his guitar and singing. The boom box plays the intro to "Streets Of This Town" and it feels like this is the thousandth time I've heard the song this week. The crew head out onto a balcony to try for a final shot. I discover that there's a permanent dance studio next door teaching people to belly dance. This is too good to miss so I wander off to interview the teacher and watch. Only in New York eh?

A few hours later we're sat having a drink in the departure lounge at JFK airport ready to fly home. This trip has focussed on only one part of Rob's experiences; his album is upbeat, melodic and packed with beauty. He confesses that he's learned many lessons and there is still stuff he's working out in his own post 9/11 world. "It has caused me to think of other situations in my own life," he explains, "where people have hit on me or been abusive or whatever. You kind of step out of the scene and say, 'Why are you doing this?' And you think, 'Why are they being like that? How can I diffuse this?' I've discovered that often the best way IS through love and not to fight back."

I was looking for some background info on the Fair Trade Tour 2006, becuase I'm planning to watch Rob perform his songs at my local church (St. Matthews)in Worthing on 5th October. I am amazed at the profile i've just read, it's given me even more determination to see him for myself and hear his music. Wonderful!

A fascinating profile of a great inspirational singer. Rob is back in his home city of Coventry this weekend and is appearing at the Godiva Festival on the afternoon of Sunday 10th July as part of a free admission folk concert in the city's War Memorial Park. He'll be onstage at about 5pm - well worth seeing!