Songsmith ROB HALLIGAN journeys from his Midlands comfort zone to learn a little of life, and mission, in Bangladesh

Coventry-based singer/songwriter Rob Halligan, with some friends, undertook a journey to find out more about the projects for which he has helped raise money through various concerts and recordings. Cross Rhythms asked Rob to keep a diary of his travels. Here it is.

Monday 14th September
We arrived at Birmingham Airport, slightly stressed but distracted enough to get passed the goodbyes. That was the first hurdle and I must admit it's always the hardest thing about going away, even for one night. I'm in awe of those dynamic missionaries who set off for months or years leaving their loved ones behind. I'd end up a blubbering wreck! Emirates are a cracking airline. After juggling luggage about to fit weight requirements we said our goodbyes and shuffled off to the flight. My two main worries were loosing my luggage or picking up the guitar donated by Guitar Aid in pieces. Neither of these worries were well founded and we arrived in Dhaka at 10am local time, safe but tired with all our luggage intact.

The first thing that strikes you is the difference between Dubai or even Birmingham to Dhaka. Bangladesh is a poor country and if the country's main airport is anything to go by it's the first thing you notice. There are no fancy shops, no neatly trimmed lawns, none of the annoying 'bing-bong' announcements. In some ways it's a lot nicer. We were given yellow cards to let the Bengali government know we didn't think we had swine flu but no one checked them when we handed them in. Immigration seemed a bit of a formality, none of the grilling you get from their US counterparts. And then we were there. Bangladesh. It felt strange being there after two years of talking about it.

We had to hang about for an hour and a half for our driver as they were busy having a strike but he arrived in a van that came from this century so I was re-assured. I'd heard a few horror stories about the transport there and was a little apprehensive but it was obvious we wouldn't encounter any of those nightmares. I'd heard the journey would be two hours. I checked with our host John Bose who said happily, "Oh no. Not two. Seven." 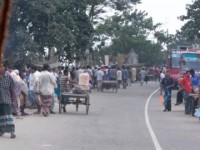 On the road to Mongla

Driving through Dhaka was in itself an experience. I've seen pictures of rickshaws and tuk-tuks but to see armies of them taking on the might of motorized city life is an awe-inspiring site. There are little or no driving rules it seems with cars hanging u-turns in the most bizarre places and without warning. There are few road signs and if there were traffic lights I didn't notice, even from my grandstand view between the driver and front passenger.

We stopped to change our money fairly soon after leaving the airport. John negotiated a good deal for us with the guy behind the glass who then handed a calculator and money to another chap who had been hanging around the door. He and John took it in turns hammering in numbers until they agreed a price and we were presented with an assortment of notes with very large numbers written on them. I changed just Â£30 and got back nearly 4000 in notes.

Outside, characters begging for small change surrounded the bus. I suddenly had this feeling of uselessness. What difference was a trip from a few people from the other side of the world going to make to one of the poorest and most densely populated countries in the world?

Global Care have a saying they use. Just because you can't do everything doesn't mean you should do nothing. The charity's founder Ron Newby once said, "We'll change the world one life at a time." Well, here we go then.

It doesn't matter how comfortable or modern a vehicle is, one hour of Bangladeshi roads is a mad experience. Seven hours and you're into the nightmare. To start with the roads were smooth and for a short way it was duel carriageway, the advantage being that the driver had a helping hand as to what side of the road he should be on. Any notion of that was soon flung carelessly aside when the road lost the central reservation and our driver lost any reservation he had towards oncoming traffic. We came very close to a number of brightly painted trucks, busses and wagons, blasting our horn liberally so the rest of Bangladesh knew we were coming. This was to let the rickshaw and tuk-tuk drivers know that they needed to move or be moved. Our driver was at one with the rest of the driving population of the country in having no intention of stopping or slowing.

This madness went on for two hours before we reached the river Padma. Huge and brown, it winds itself to the sea, the combined force of the Ganges and Brahmaputra. We stopped to catch the ferry at Aricha Ghat. The funny thing was that although, according to the map, we drove through only one other town in the 50 miles we had travelled, there was a never-ending stream of rickshaws and roadside markets. This place was marked but only because it had a ferry. The road just stopped there.

As soon as the minibus stopped the van was surrounded, this time by boys selling popcorn. Obviously, we were tourists and we had money. An old lady was amongst them, begging, and there was someone with a huge pile of English children's books. With the help of a phrase book and hand movements I struck up a conversation with Tuska, a 14 year old boy who lived on the boat. He was a popcorn seller and had done this for as long as he could remember. He and the crowd of children wanted their photo taking just to look at it on the screen of the camera.

We headed off again, convinced we'd broken the back of the journey but found out we still had five hours of driving to do. It was hair-raising but uneventful. More near misses, more markets, more busses, more potholes. "I must be mad doing this," I thought.

The further south and west we travelled the wetter the terrain. One of Bangladesh's biggest problems, apart from poverty, is the rising sea level and there is evidence as you drive toward the Sundarbarns that the land is flooding. However, everywhere was so green and I realised just how fertile this land is. When it's not being flooded out or blown away by cyclones south west Bangladesh offers a lot of farming potential. But it is volatile and this largely forgotten country is criminally poor. Without a lot of investment the physical land of the Bengal Sundarbarns could well be gone in 50 years.

We were convinced that John Bose's estimate of seven hours had to be wrong. Through exhaustion some of the team fell asleep between potholes and horn blasts until finally, after seven hours and 15 minutes we arrived in the little port town of Mongla.