Robin Mark: The Belfast worship leader speaks about his ministry.

ROBIN MARK has arisen from local church obscurity to become a major figure in the international worship scene. He spoke to Tony Cummings. 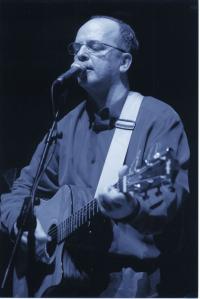 A lot, a whole lot, has happened to Robin Mark since he was last featured in Cross Rhythms issue 46. Then, he just achieved UK Christian retail distribution after years of recording albums independently. Six years on and incongruous as it might seem for this worship leader from east Belfast, Robin finds himself as a bona fide recording star. The Gospel Music Association recently awarded him the 2004 International award while his Hosanna! Music albums 'Come Heal This Land' and 'Revival In Belfast' have clocked up combined sales of around 700,000 units. Now the composer of such hugely popular songs as "All For Jesus", "Days Of Elijah", "Revival" and "Take Us To The River" is set for another sales blockbuster with his new album 'Revival In Belfast II'. Robin took a few minutes off from his duties as the director of worship at Belfast's Christian Fellowship Church to answer some questions. I began by asking him what he would say the Lord has been teaching him over the last few years.

"In the now time honoured words of Robin Williams, seize the day!," he said. "I've been realising what a privilege it is to do what I do and to have the opportunity to minister all over the world. I've also realised that it's something that very few people get to do! I have further learnt that it has little to do with talent and ability and mostly all to do with God's blessing. So, I am trying to fulfil his call for me as best I can until my 'season' is over. In short I am learning all about humility again."

The singer/composer admits to being staggered by the huge American sales of his recent albums. "I had no idea that there would be such a response. Everyone involved in the projects has their own opinion as to why that happened. One thinks it's the songs, another the marketing, another thought it was because at the time of the first release there was a big interest in Celtic music. I go with the answer to your first question. It was because God just blessed it and that's all!"

How the unassuming songsmith came to team up with Integrity Music is one of those strange God incidences. A church member met Steve Merkel, A&R man for Integrity Music, at a conference in the US. Robin explained, "They struck up a conversation and when Steve mentioned that Integrity would really love to do an 'Irish record', Ronnie, (for it was he), told them that they'd best get to our church to do it. Steve's original concept involved a big choir, orchestra, the Kings Hall 5000 seater and maybe Dana singing!. Needless to say we took some time to work out what eventually happened."

Robin is determined that his US album success won't change him. "I get to travel to the US and Canada and elsewhere but I still have my full time job in Belfast as an acoustic consultant. I still have three kids and a wife and I still have to pay the bills. I also have a job in my church now, and I have to keep well grounded on the home turf, so to speak. I still think I'm the same person though. Hold everything loosely, as an old minister friend of mine used to say. I work one day a week as director of worship in CFC. That's a role that is to develop the overall worship in the church and to release as many people into the ministry as we can. I lead worship in CFC, Belfast about once a month at two or more services. We're very blessed to have Johnny Parks and Marie Lacey as worship leaders in CFC as well as three or four others. So we have a good mix of emerging leaders and skilful mature leaders to choose from."

I asked Robin how would he respond to those who have criticised 'Revival In Belfast' pointing out that there isn't a revival in Belfast! "I would answer that in about six different ways. One, it wasn't my title. It's an American choice and as you know if you visit the American mid west where Integrity is based, the word revival is synonymous with the word mission so it's not the same thing as our concept of revival. (By the way they originally wanted to call it 'All For Jesus', the name of a Kingsway album that I did. So after spending weeks convincing them not to call it that I couldn't be bothered starting to argue over semantics).

"Two, who says there hasn't been a revival here? That supposes you have only one concept of the word revival for starters. Our church has grown from about 200 people to over 1,000 in about 12 years. Jim McConnel's church in North Belfast is probably the biggest in the UK and he sees conversions every week. We have just been prayed out of 30 years of conflict and are enjoying relative peace and freedom. So to criticise because it doesn't fit someone's concept of revival seems a bit unfair. Remember, also, that some of the great revivals of the past, numerically, were relatively small. Three, the song 'Revival' is on the album and we're all singing 'Revival' in Belfast! Four, it's a statement of faith as the song 'Revival' is a faith song looking forward and asking for revival to come. (That's the reason Integrity say they picked the name, actually. Which I think is very nice.) Five, people like to criticise anyway, so it's life, Jim. (You should see some of the reviews that I get!! Eek!). And six, we promise never to do it again..... Oh no! We just did! ('Revival In Belfast II' - also not our title choice.)" 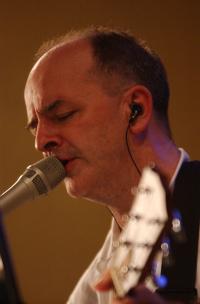 Robin went on to speak a bit more about 'Revival In Belfast II'. "We did it to the Integrity model in terms of recording, musicians, methodology and all that, but funded and supported by the local church with the church standing to gain from sales. That's the biggest difference. We decided that the church needs to benefit from album sales. As you know the vast majority of people make their own albums, sell them locally, etc and just about manage to break even. (Most of these very worthy efforts are supported by their churches, who then never see any fruit for their investment.) Then when someone gets 'recognised', normally a record company comes in, puts in a big investment and then contracts them in order to develop the artist and, to be honest, make some money. Now, there's nothing wrong with that, per se. But we just thought it would be nice to turn the whole thing on its head!

"In terms of the content on the album, it feels more or less just like 'RIB' 1 and 'Come Heal This Land'. Mainly my songs, done live with about five other songs from other sources. Most importantly it's a church at worship, and that's the main thing. It's not managed, or staged or structured. It's our church and we're worshipping corporately as our first priority. The
recording, honestly, comes second!"

I love Robin Mark's voice, lyrics and music. They move me to praise God in a deep way so I can sing his praises, weep, rejoice or deal with what is happening in our lives as a family. Are people like us welcome in the church? We could only attend when it is possible.
MimiAC

I am coming home to Belfast to live and I would like to know where Robin Marks church is so my family and I can join him in his ministry, PRAISE THE LORD!!!!!!

MY HEART DESIRES TO PARTNER WITH YOUR MINISTRY TO REACH OUT TO MOSLEMS,BUILD CHURCHESE IN THE VILLAGES. YOUR MINISTRY BLESSES MY SOUL.SEE BISHOP JOE MANZI IN FACEPAGE

Please let me know if you have cd in Italian. thanks

Our area has been blessed mightily by Worship Leader Robin Mark. The Lord has blessed Robin with
a combination of fine musicianship and a servants heart to minister to people. His humbleness and unassuming Godly Focus....with his unique touch of
dry wit / Irish humor ( Song...John Wesley) lends itself
to engaging worship but to good hearted fun ! Looking forward to having Robin minister to our area
once again on September 6, 2008. The Lord has blessed this man mightily and his ministry can be summed up in one of his songs..."When It's All Been Said and Done"......Have we truly done our best to serve the Lord.....When it's all been said and done
You're my life when life is gone.
Be Blessed my brothers and sisters......Be Blessed

hi Robin ur music is great.its such a blessings.
continue with th good work and may God richly bless you.

I was at the concert this last weekend in Richardson. Funny thing is I listen To Revival In Belfast during my personal pray time. I have for years.
Thanks for letting God use you. Your worship music is so very anointed.
I was the person that offerd to send you and your wife a piece of my jewelry. May God richly bless you, your family & ministry.

Robin, you are anointed and a fantastic Worship Leader! Keep up the good work! I look forward to buying your new CD. Blessings for the people of this world!