Roy Tosh: The Orlando-based rapper finding the love of the Father 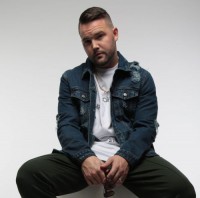 In 2016 Cross Rhythms was giving a lot of airplay to "Trust", "Lean" and "Bass Law", three tracks from the album 'The Revert' by Orlando-based rapper Roy Tosh. Three years on and the radio exposure continues with Tosh's single "Like You Do" featuring a delicious vocal hook by V.Rose on the CR airwaves.

Roy Tosh was born and raised in Indianapolis, Indiana. He was a bit of a celeb at high school for his basketball skills but after graduating an encounter with the living God changed his whole attitude. As his biography explained, "Despite the absence of a musical background, Roy Tosh found himself filled with a message that poured out of his soul through hip-hop music. Remembering the influence that rap artists had on his teenage years, Tosh knew that there was no better way for him to reach others with a positive message. Tosh delivers an authentic message about life - and adds to it the hope that is only found through the Gospel."

He first rapped using the name 737 and found a following after releasing the albums 'Get You Some' and 'Convinced' and sharing the stage with such CCM acts as Pillar and Britt Nicole and rappers like J'Son and Flame. In 2014 the emcee relocated with his wife to Orlando, Florida, and connected with nationally acclaimed gospel rapper Benjah. It resulted in a name change for 737. He told journalist Mitchell Weiss, "Benjah is the one who actually recommended that I do the rebrand. He's very incredible at the branding side of music, and of course the actual music side as well. He brought a lot of balance to my life. I didn't understand branding or the business side of music, which you have to know, regardless if you're a Christian or not, you need to understand that side of music. And when you do, you can really reach more people.

"I ran into Benjah upon moving to Florida and even to this day he still mentors me and I'm still working with him. I'm super grateful for him. One thing about a stage name is it has to be personal and easy to find. So for me, Roy is my middle name and Tosh is the last part of my last name, and now when people look up my name, they are finding my music much easier."

After the release of Roy Tosh's mixtape 'The Revert' which featured Benjah, Deraj, TJ Pompeo and Black Knight he continued to share platforms with artists such as Tedashii, Benjah and Canon. He was also featured on Benjah's album 'Haze N Reflections'. After that Roy's 2013 'Death Before Love' and his 2018 set 'Above The Water', on which V.Rose and Aaron Cole guested, have met with critical success.

Roy is convinced that the birth of his son in 2016 has been a pivotal moment in his spiritual growth. He told Mitchell Weiss, "Obviously you don't have to be a dad to know God as a Father and experience his love, but once you become a dad. . . I can't explain the love I had for my son when he popped out the womb. Like you hold him for the first time and it's unexplainable. I know how messed up I am, I know how sinful I am, I'm very aware of my brokenness and my need for God, so the thing was if an imperfect dad like me can love someone that much, then how much more does a perfectly Heavenly Father love all of us? One story I can think of is, one night I was singing over my son, and the Holy Spirit just hit me in reminding me of the verse in Zephaniah 3:17 where God is said to be singing over us, and now being a father it makes sense that he would because of the love that he has for us."