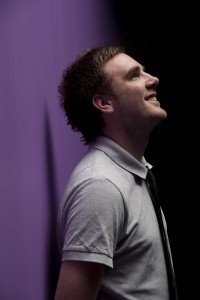 It's a strange coincidence that the story behind one of the most successful modern worship music debuts of recent times - the album by Northern Ireland band Bluetree - should so closely resemble that of Ryan Griffith, whose 'Refuge' album was released through Kingsway in October. Like Bluetree, Ryan's album was produced by top American studio man Paul Mills (Third Day, Robin Mark) and like Bluetree it was recorded in one of the world's great studios, Dublin's Windmill Lane (U2). Cementing the coincidence still further, two of the songs on Ryan's album were co-written with Bluetree's frontman Aaron Boyd.

25 year old Ryan is the director of worship at Exchange Church, Belfast (also the home church of Bluetree). He admits that the 'Refuge' album has been a long time coming. "I think it was maybe about four years of writing before we started recording. It wasn't the case of me wanting to write an album and so writing the songs for that. They are about different experiences I have had through the years. God was giving me the opportunities to lead worship and so I had a collection of songs to record and resource the global Church with them."

Ryan was born in Belfast but was raised in Carrick Fergus where his parents, both Christians, worked as teachers. Said Ryan, "We always went to Church, Carrick Fergus Elim Pentecostal, and we had a strong family. When I was about 14 I decided I really wanted to follow God. When you are younger, you don't really get it. But being surrounded by church and exciting things happening because of God helped me to make my decision. My parents continually talked about God and that definitely helped."

By the time he was 15 Ryan was operating the sound desk at church. Then the worship leader approached the teenager and asked whether Ryan wanted to sing with the worship band. Recalled Ryan, "I was praying about it before I said yes. In church they were singing a song 'By Your Side' by Hillsong. The verse was saying, 'Tell me what you want from my life, Lord.' My Dad put a jokey note under my bedroom door whilst I was singing out in my room which read, 'I would like you to sing with the worship team, love, your Heavenly Father.' I took that as a sign to run with it."

By the time he was 16 Ryan was leading worship. A visit to a youth event in Germany called Teen Street had a profound effect on the young Ryan. He vividly remembered, "Halfway through the week there was a 24 hour prayer room. There was a woman who always prayed in the room, and she had a dream about 30 Irish lads who God was speaking to. She asked around and found us, and asked us to come up to the balcony one day outside the prayer room. She brought one at a time up and prophesied into their lives. When it was my turn, she said she couldn't share mine in front of the group, so I had to go back. She asked if I wrote songs and I said no. She told me, 'You are going to write songs and God is going to use them for his glory around the world.' I was really taken aback. I went away, didn't think too much about it, but was really excited by it. I was leading worship and from that I sang out melodies in my room to a group of teddies. I started to then lead worship at different events and the songs started to come."

In 2007 Ryan joined a loose knit aggregation of musicians who were to become known as The Gathering Band. Ryan explained how an Irish worship leader became a temporary part of an English worship band. "Mark Pugh had been in contact with another pastor who was in charge of an event I was leading in Northern Ireland. I sent over songs, they loved them, and asked me to be part of it. They recorded their first live album, 'Rise Up: Live UK Worship' (2007) which I was a part of. Two of my songs were on that; and then we did a second one, a studio project with producer Paul Burton, 'Redeemed From Emptiness' (2008). I wasn't really connected with the band throughout the year because I was in Northern Ireland, but whenever The Gathering event was held in February and March I would come over and share music. I was 19 or 20 when I was at The Gathering. After the third year I was approached to worship at Summer Madness. I did it the first year with Paul Baloche. It was great leading worship with him because I looked up to him and he was very encouraging with different songs. Last year, Ben Cantelon. He was a really great guy and it was just amazing leading worship at that kind of festival, because so many different churches come together and it was great to see them bringing it back to their churches and letting God minister through those songs."

As the years rolled on Ryan became only too aware that he had a repertoire of self-composed worship songs which had the ability to touch people's lives. His friendship with Bluetree's Aaron Boid encouraged Ryan to dream big dreams. Said Ryan, "Aaron had the contact and he encouraged us to record the album. So I got in contact with Paul Mills, the producer from Nashville. I really felt it was time to record the songs, but I didn't know how. People said God is going to provide. So we booked Windmill Lane for February in faith that God will provide. I was thinking in the back of my mind, What happens if we don't have the money?' Windmill Lane costs Â£1,500 a day, and we wanted six days. I thought it was a bit crazy. Windmill Lane then shut down, but the same guy who owned them had a studio in Ballymena which was Â£2000 for six days. So we went for it. Then a guitarist from England booked them out for three months so the studio took him instead of our week of work and we had nowhere. Then, Windmill re-opened and the manager said that they would give it to us for six days at the same price that we would have paid for the other studio. So God provided and spoke through the money stuff!"

After the initial Windmill Lane sessions the 'Refuge' album was completed in different studios. Explained Ryan, "We went to Tre Shepherd's studio up the North Coast. He is a great guy, with a great heart. The guys who I was playing with at the time were excellent musicians so we got the contact with Tre. Again, he gave us a great deal and opportunity as far as the financial side was concerned. We did a lot of praying. The thing with Paul Mills as well, we did a lot of praying every morning and every evening. It wasn't the case of going in, recording and leaving again. It was all about capturing the spirit of worship within the album."

Back in Nashville Paul Mills began to mix the album. Thanks to the wonders of the internet he was able to send Ryan his mixes as he completed each one. Admitted Ryan, "I was very picky. The whole process was very funny - it would go backwards and forwards. Because I was teaching at the same time and had taken a week off school to do the initial recording, I couldn't be in Nashville. I had initial ideas for an orchestral massive climax to the big chorus of the opening song 'Can't Contain'. Paul scores films so I asked him if he could write an instrumental intro which somehow reflected how God cannot be contained in music, songs, creation or anything in fact. So he worked with the orchestral film score into an exploding chorus. You can hear different parts of strings in it as well. The arrangement was very much what we did live, but he just brought a different light to it with all the composition."

All the songs on 'Refuge' come out of particular parts of Ryan's spiritual journey. He spoke of the 'Refuge' title track. "I am in a family of five and my middle sister Faye was born with epilepsy and cerebral palsy. She's two years older than me. From me being born and being old enough to see her suffering with these fits and seizures, it was definitely an atmosphere where we needed to trust and cling onto God. At the age of 12 she had an operation to have part of her brain removed to stop the epilepsy. The operation was successful and I didn't really understand it. But Mum and Dad were so thankful for it. When Faye was 21 and I was 18 or 19, I was reading Psalm 46, 'God is our refuge and our strength.' I had a melody for that and a verse idea but never had a bridge or chorus idea. One night I woke up and heard something from Faye's room and went in, she was having a fit. I rushed in, got Mum and Dad who took her to hospital. It was about 4am and I was in a mess in my room. All the questions of why this had happened again were going round in my head, and I started singing out the chorus of the song. 'Our God is a shelter in a storm; our God is one who won't let go, our God remains the same.' I was reading Hebrews which said that Jesus will never change. Even massive things like Haiti disasters or minor things that we can't explain; we know that God is the same and in control. So the chorus is pretty immediate and that worked pretty well with the verse idea from the Psalms. That was quite profound."

Another of the songs on the album, "Lightens Up", was influenced by a memory verse, Matthew 5:14, which had been assigned to Aaron Boid's four year old daughter Lily. Remembered Ryan, "Lily had a memory verse from Sunday school, and she came home one day and said the verse to us. We asked if she knew what it meant and she said no. But she's only four years old. We thought it would be good to work from that as the verse, and then we began to worship and work around it and the chorus came from there. The other co-write 'Can't Contain' we worked a lot harder on, but 'Lightens Up' was very immediate."

'Refuge' was released independently in May and was extremely well received by members of Ryan's church and at 2010's Summer Madness. Eventually it came to the attention of Kingsway, who released it to UK retail on 18th October. One thing seems certain. The worshipping Church will be hearing a great deal more from this talented and powerfully anointed 25 year old.