Tony Cummings reports on one of the most unclassifiable acts in Christendom, SIDZCARBONATEDMILK 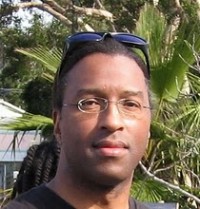 Of all the thousands of acts chronicled on the Cross Rhythms website few come as unclassifiable, challenging, adventurous and downright strange as Detroit's SIDzCarbonatedMilk. Probably the nearest description this hapless journo can offer after careful listening to the albums 'The Men In Martian Ice: Anthology' (2000) and 'The Mune-Pi Parables' (2010) is to suggest avant garde electronica jazz funk though even that doesn't do justice to the surreal thrills courtesy of the 28 contributors (including a tap dancer) who lent their talents to the aleatory experiments offered on the albums. With a third SIDzCarbonatedMilk project due for release in December 2012 it's now time to shine some light on this intriguing team of musical experimentalists.

The creative driving force behind SIDzCarbonatedMilk is keyboard virtuoso Sidney Howard. Sidney grew up surrounded by academia. His father was vice president of the pioneering black college Mississippi Valley State University and his mother, Dr Zelma Howard, was the World Literature professor. Dad was also a big band jazz reed man and growing up on campus Sidney was soon appreciating jazz music. So it was only natural that Sidney went on to study jazz.

Upon purchasing his first "real" synth - an Arp Odyssey - chosen for its duophonic playability - in 1979 Sid began working on compositions, the first called, appropriately enough, "Duophonix". With rhythm guitarist Mark Drummond (decades later to play on 'The Mune-Pi Parables') he tossed musical ideas around in a unit briefly called Ebony Specktrum. While still at college Sid played keys for Chicago soul giants the Chi-Lites and opened a show for Rufus featuring Chaka Khan.

Sidney moved on to sign a publishing contract with Musiki Publishing, the concern run by songwriter Sylvia Moy who had hit with Stevie Wonder ("My Cherie Amour", "Signed Sealed Delivered", etc) and other Motown stars. While at Musiki Publishing, Sid met up with singer/guitarist and recording engineer Rufus Harris and soon Howard had joined Harris in a contemporary Christian band, Jubal. The band performed throughout the mid west and east coast, sharing the stage with acts like the Winans, Phil Keaggy and Daniel Amos. Jubal folded in 1989, one of their last gigs being in Ohio with a then virtually unknown trio called dc Talk. Said Howard about his spell with Jubal, "It seemed as the performance aspect of music ministry had ended for good. I became more and more active as a behind the scenes entity.writing, producing, and arranging."

By 1989 Sid began working on an album with musicians J Carl Robinson and Rufus Harris under the surreal moniker of Carbonated Milk. Simultaneously, Sidney was commissioned by a Suncoast Motion Picture Co producer to record an album of Carbonated Milk-styled Christmas carols for their 'Family Christmas Treasury' promotional VHS video release. Included on quasi-officially Carbonated Milk's first release were vocals by Sid's then protÃ©gÃ© Rodney Hoskins. The cover credit read, "Music performed by Carbonated Milk," but as an occasion-appropriate joke, Sid changed the on-screen credit to "Carbonated Nog".

The tracks which Sid and cohorts had been recording attracted the attention of Motown Records who had kicked off a jazz subsidiary MoJazz. 'Please Don't Harmonica' by Carbonated Milk was duly released by MoJazz but with mass public tastes moving away from Chick Corea-style jazz fusion to the easy listening smooth jazz sounds of Kenny G the album got scant attention and to make matters worse another band had got in before them and registered the Carbonated Milk name.

Over the following years music continued to develop and diversify and Sid was attentive to the changes. He listened to early techno, to drum 'n' bass and jungle while Bjork's 'Homogenic' was also a major influence. All the time he kept his musical hand in practically becoming the resident composer for the critically acclaimed Detroit Repertory Theater. Finally in 2000 a stunning independent 22-song anthology 'The Men In Martian Ice' was released under the name SIDzCarbonatedMilk. It was groundbreaking stuff. Cross Rhythms reviewer Mike Rimmer enthused, "Check out the jazz influences and avante garde musical approach but also check out their desire to communicate a Christian message in an intriguing manner. Their use of samples is brilliant. Other highlights are the electronic funk of 'Duophonix', the intense sinister atmospheres and treated vocals of 'Dearborn', the sheer grooviness of 'Malabala' and the totally satirical 'Black Velvet Elvis'. Out on their own, it's weird, it's wonderful and Christendom desperately needs more bands with the originality and the creative vision of SIDzCarbonatedMilk."

Unfortunately, efforts to publicise the groundbreaking album largely floundered. The album's co-producer and promoter Jack Marchbank had a day job as a political consultant running up to the 1999 US presidential elections. Unfortunately, the "hanging chad" debacle of those elections tied Marchbank up for months on end. Complicating matters, Sidney himself was called into jury service the following month to be followed by Sidney's landlord selling their rented home - allowing him and his family only 10 days to find new shelter. With all these unexpected occurrences the momentum in plugging 'The Men In Martian Ice' was lost.

But Sid is nothing if not determined. In 2008 after a seven year hiatus he began working on recordings that were eventually to emerge in 2010 as 'The Mune-Pi Parables'. Like its predecessor, the strange avant garde electro funk album captured the ears and heart of Cross Rhythms' Mike Rimmer. "Lurching as it does from soundscapes to spoken word rants to instrumental passages and audio collages and different musical styles which employ a selection of vocalists to make the vision alive. In other words, it's a musically crazy album which is what I like most about it, full of unexpected twists and turns. It's also one of those albums that gets better with repeated listening as the subtlety of the messages seep through into your consciousness. But then isn't that the whole point of a parable? And this does all have a point and can be summed up as an opposition to the cultural norms that so many people fall into without realising it. The world is not a great place and it's time we woke up to that truth. Sid delights in telling stories that help the enlightened realise the emperor is naked. And he does it in such a cool way! So dive in, enjoy the musical creativity, puzzle over the parables and let the truth take root in your heart."

Sidney spoke to Cross Rhythms about his approach to creating music. "My music and my literary writing cross along the same areas. I have a writing style that I call 'jazz literary' because it's almost built on the same rules as playing jazz and composing jazz. A lot of improvisation, a lot of control, the flow of consciousness writing and such. And what I do with music is that I come up with the premise, and I let the music take me where it wants to go. The only difference is that the genre is supposed to be rock. Then I stay within the limits of rock in the same way that a jazz player can play anything he wants as long as it fits in to the chord that's played at the time. And sometimes you can break the rules, as long as you resolve to the next chord."

One of 'The Mune-Pi Parables' more accessible tracks is "Can I Fly Away From You" with a sublime, soulful vocal. Said Sid, "I'm singing background, but the lead vocals are done by Rodney Hoskin, and in my opinion he is one of the best singers I've ever heard, let alone worked with. I used to tell people that you probably noticed a similar sound to Luther Vandross."

Such is the dazzling eclecticism on 'The Mune-Pi Parables' that the album has a very definite cinematic effect on the listener. Said Howard, "The way that I look at it is as a musical journey. And I envisioned, when making the album because you notice that most of the songs are contiguous, I envisioned walking through a neighbourhood, where the first neighbourhood you walk into is an Arabic neighbourhood, that's shown on the map. Then you go into the next tune which is humming across the course of gleeful idiocy, which I imagined as being a cosmic cocktail party, where people are in some other worldly reason talking about their philosophies, about religion and stuff. Then I come back down to earth, with that said, and it goes into some poetry. But you hear the background going from kind of a crowded cocktail party environment to going to the street. If the listener puts on headphones and listens from the first tune to the end, I want the experience to be more than just listening to an audio CD; I want it to be more like an experience of watching a movie."