SOS: A grassroots band from Northern Ireland talk about their 'Borderlands' album 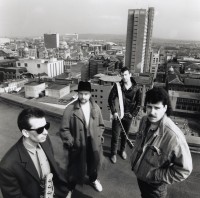 Northern Ireland is a tough nut to crack if you're a gospel rocker. Many of the problems come from surprising quarters. Matters are not helped when you are closer to Clapton than Cliff.

"Even today you would think that you could play with your amp turned on..." muses Ivan Mkuirhead, co-founder and guitarist of SOS.

Sections of the province's Christian community remains afflicted with Neanderthal musical prejudices. "People confuse what's right and wrong with what they like and dislike personally. Country music's O.K. 'cos people like it but rock music's of the devil 'cos a lot of people don't like it" concurs fellow guitarist Davey Vance. It seems at home at least that SOS just aren't fully appreciated. Their high octane rock evangelism simply isn't meek and mild enough for general consumption. "Tiny Minds" on the band's new cassette album 'Borderland' is addressed to such people: "Got tunnel vision only see one side."

Drummer Mike Love says that there are exceptions but a rock ministry in Northern Ireland gets little support: "People say: 'Are you still playing in your wee band?' as if we're something childish. The church gives financial and prayer support to missionary work, so why not to us?"

SOS played the Impact Festival in Scotland this year and found the new audiences refreshing. "We've played the coffee bar circuit for a long time and it gets very stagnant. We'd like to gig more in England and Scotland on the secular circuit. The problem is finding promoters willing to pay our expenses. A university can get two to three bands for the price of one Irish band. We only aim to cover our expenses; we're not in it for the money" adds Mike.

The band have soaked up a lot of influences from the slinky Little Feat to the belt and braces Bryan Adams. Much of this grounding comes from all the members having played in secular bands. Guitarist Ivan Muirhead has also sessioned for veteran Rodney Cordner.

It's been a long apprenticeship and after years of successful touring the band decided to record their debut album earlier this year. The resulting work sounds like a raunchy Dire Straits but has the additional bonus of good lyrics.

"Only now everything seems to have come to a point where this is the direction to go in and everything has become available. We definitely felt that God was saying 'its time...." says Mike.

The resulting recording was achieved for less than Â£1000 at Novatech Studios 10 miles from Belfast. The sound is crisp and exuberant and the playing always venomous. As Jonty Mcfall remarks: "Christian music should be better than secular music. People seem to just accept that Christian music will be substandard. That's not the way it should be - our lives are not supposed to be substandard so why should our music be?"

This radical commitment to quality has already paid dividends. The band have already completed an interview album/preview on the BBC's fledgling Radio 5. Astute local radio station BCR gave the album airplay in its first month of release there by confirming the band as crossover rock contenders.

"It was good to get praise from the Radio people. When they see that you're not just your usual three girls and an acoustic guitar out of a church hall, they take a bit of notice."

However, suggestions that the band are, in time honoured fashion, "selling out" are quickly scotched: "The Devil is very subtle so why shouldn't we be subtle in putting forward God's name" says Jonty.

Mike readily admits to the band's lack of bombastic dogma: "We don't fall into the clichÃ©d type thing - you must be saved blah blah blah. Those things are important but we don't set out like some groups to ram it down peoples' throats just 'cos they don't think beyond that."

Instead the group write about what they see happening around them. This calls for guts and is most daringly explored in the title track "Borderland":

"Blind men take their children's hand./How can we love our land and hate our fellow man?" drummer Mike Love says that he is optimistic as a Christian and sees Christ as Ireland's only hope: "Our aim is to let as many people know about Christ as possible."

Not the words of a religious primate but those of a rock solid drummer in a "wee band". Perhaps solutions also come from unexpected quarters.

The opinions expressed in this article are not necessarily those held by Cross Rhythms. Any expressed views were accurate at the time of publishing but may or may not reflect the views of the individuals concerned at a later date.
About Neil McClements
Neil McClements is a British-born music fan and new contributer to Cross Rhythms.