For a generation she was THE Page Three girl, the topless wanton who provoked millions of male Sun readers to sexual fantasies. Launching a pop singing career on the strength of her modelling fame, SAMATNHA FOX was soon hitting with such salacious songs as "Touch Me (I Want Your Body)". But now the unthinkable has happened. Sam Fox has become a Christian. Mike Rimmer interviewed Sam at the Greenbelt Arts Festival. 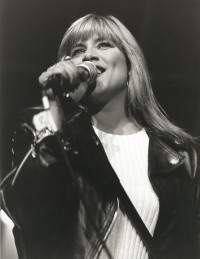 After months of speculation Sam Fox chose the 1994 Greenbelt festival to proclaim her new found faith in Jesus. In the hours before her performance I watched with mild amusement the arrival of the assembled scribes of Fleet Street as they struggled to understand the concept of Greenbelt. We were informed that there would be a press conference after her performance and that she would be conducting no personal interviews. Except with me!

So, in true 007 style, your courageous Cross Rhythms correspondent was coyly carried backstage amidst the kind of security normally reserved for Stella Rimmington. My mission now that I've accepted it? A quiet chat to find out about Sam's recent experiences of God.

The million selling pop singer played in Greenbelt's Big Top. Without doubt, controversy will surround her performance. You could almost hear the collective swish of raised eyebrows as she sang her song "Naughty Girls Need Loving Too". Equally, there was the massed sound of jawbones clunking as she danced happily to her music. Some even said it was a tad provocative! For me, it was a good set of pop songs performed enthusiastically!

Isn't it interesting that no one ever bats an eyelid when Cliff wiggles his bottom but when you're Sam Fox... so before you leap to judge her, read on! In the later press conference when challenged about the 1988 hit song "Naughty Girls..." her only reply was to point to Mary Magdalene and leave those assembled to hang their heads and draw their own conclusions.

Her 45 minute set of pop songs was a shortened version of the stage set which had just been performed on her tour of the former Soviet Union. Her band of seasoned session musicians have backed her for five years all over the world. It showed in the effortless way they laid down a solid pop groove. It isn't hard to see why Europe and North America have succumbed to Sam's singing, earning her a very respectable 38 gold and platinum discs worldwide. In Britain it's been a different story as the tabloids have made it difficult for the public to forget her topless modelling past.

Recent press reports have concentrated on Sam's conversion but her feelings for God date back to her childhood in a convent school. Even as a schoolgirl, she sang in the choir at school and church. Said Sam, "I felt at the time that religion was pretty tough but I had a lot of faith and belief in God when I was growing up until I left school. I became famous at 16 and I would be sitting on a beach in Antigua doing a shoot and I would forget about my faith. I was wrapped up in a world of money, glamour and everything."

A successful career still left Sam with the feeling that something was missing in her life. Before Christmas she met a Christian make up artist who invited Sam to visit her church in London. Holy Trinity, Brompton (HTB to its congregation) has attracted much media attention because it was one of the first churches to experience the current move of the Spirit which some are calling the Toronto Blessing. Sam was surprised by what she found when she visited the church. "The church I used to frequent was dull and dreary," remembered Sam. "The songs and people needed lifting. I walked into Holy Trinity and it was just alive, I couldn't believe it!"

Sam joined HTB's Alpha course which introduces Christianity to those who want to find out more. The 10-week course helped to convince Sam that she needed to become a Christian. "It was a little bit like going back to school. There were six of us in a group. Two of them in mine were complete atheists who kept on saying what about this and what about that? They kept saying things like Jesus was a spaceman. I would listen to the fors and againsts and the fors outnumbered the againsts.

"I did the course and obviously there's lots of do's and don'ts and you think to yourself this is tough! They explained to me that I could take it slow. Everybody sins but God forgives us so long as you don't take that for granted. On the last night of the course something was tearing me away and I didn't want to go there. That was the night I was going to give my life. I thought why not. If everybody did what I did, what a wonderful world this would be. I feel like I am a role model for a lot of people because I create media attention. I thought maybe I should be doing this for other people as well as myself."

The move of the spirit in HTB with its laughter and people falling over by the power of God had a profound affect on Sam. "I've seen people healed. When I did the Alpha course I was waiting for proof all the time. When I saw things happen, I kept thinking this is not my imagination." Sam even experienced the Holy Spirit for herself. "It happened to me one day, from the bottom of my feet to the top of my head. It felt like my feet were a dead weight. My body was just so light."

The experience of the Holy Spirit has strengthened Sam in her new found faith. "You think about everything when you've been touched by the Holy Spirit. Every opportunity you have to think about God, you do. He's on your mind all the time. I've just been doing a big concert in the Ukraine. Every opportunity I got, I was talking to people about the word of the Lord. You know that they didn't have Bibles a few years ago. I was reading them Psalms."

Some Christians may be surprised to find that Sam has few regrets about her modelling career. "I am from the East End and I've made good. I was brought up in council flats. I've been blessed with my career. I have no regrets and I've never been harmed and I can only thank God at the end of the day. I don't think I would still be sitting here now if I'd done anything wrong. I always thought I made a lot of people happy. The way I approached my career was very clean cut and dried. God has driven me to greater things. I've come from little things and I've gone to bigger things. God doesn't want me to lose my personality. People know that Sam Fox is the girl next door, she's cheeky, she has fun but she draws the line."

Musically, she is currently writing songs for her sixth album. There have been reports in the press that this is going to be heavily religious but Sam denies this is true. "I am not going to start singing hymns. There will always be songs that are about relationships because that's part of our lives. It's a big thing for Christians, you are always thinking about if it's the right thing, the right person. Is this the person I want to spend the rest of my life with? But that's what's good about it. It's not abusing relationships. We're looking for something which will last forever. That's what I am going to be singing about, something which is stable."

Sam now has the opportunity to influence many people. "I am reaching an audience and if I can do that for God, then fantastic!" Because of her past reputation, it is sometimes frustrating that people take her music the wrong way. "It's like singing about sex. What do a man and wife do when God brings them together? They make love. Why can't you sing some songs with sexual connotations? I don't want to abuse that."

Sam's appearance at a Christian festival was big news in the tabloids but why was she at Greenbelt? "I actually asked to appear at this festival because I felt that I really wanted to. Obviously since my new found faith began at Christmas and I heard about this festival, I wanted to be here and have a good time with everybody and celebrate God together."

Sam recognises that when you're first a Christian, things aren't all straight forward. "It's one of the most difficult times of your life because so many people put you down. You have this constant battle with people and you have to learn to deal with them by ignoring them because you know the faith you've got and the relationship you've got with Jesus and that's all that matters. Once you've sorted that out, you've got peace of mind. I don't worry what people think, I just try to go through life trying to be good to people and having peace and helping as much as I can in society and that's what counts."

Now that Sam is a Christian, it is important to support her as she grows in her faith. There will be some who will judge her when they see her performance or clothes. There may be some shaking of heads over her songs or stories in the tabloids. But be careful if you're tempted to point the finger. Sam Fox is solidly saved but she doesn't have all the answers because she is only a young Christian. She deserves our support and prayers that God will strengthen her faith and give her the wisdom and opportunity she needs to share it.

Any chance this could be removed after years passing waiting for confirmation of Faith, fruit.
So sad. But please keep praying.
HOME

I am really very happy to hear about the Sam's changing life to Jesus Christ. I would say, God is really really gracious to her/us.