Samestate: The Kansas City pop rockers breaking through in the US

Even with a record label push, it's never easy for a new band to break through in the crowded US scene, but that's what Samestate from Kansas City have managed with their Sparrow Records debut. 'The Alignment' was produced by hitmaker Paul Moak (Mat Kearney, Third Day) and gives them an engaging sound that takes in rock bombast ("Sons And Daughters"), worship balladry ("King"), jangly pop rock ("Love Remembers You") and the band's first US radio hit "Hurricane". The latter is a bold proclamation that God's love is unconditional and will continue despite our disobedience. It's a theme reflected continually in the band's songs. Said Samestate's lead singer, guitarist and songwriter Dalton Diehl, "As a band we always hoped that 'Hurricane' would be the lead single. There was something different about it that we felt would be refreshing for radio. I always thought that there was a different type of yearning in the song, a call to stop trying to figure out the love of God and simply accept it. I'm excited that people are starting to relate and attach themselves to 'Hurricane'. It even helps me to know that I'm not the only one who struggles."

As well as Diehl, the lineup of Samestate is guitarist Darren Harms, bassist Ryan Lytle, guitarist/keyboard player Raymond Wyatt and drummer Blake Leoni. On the Proclaim Radio website Dalton Diehl spoke about how the band came together, "Samestate started about three years ago in Olathe, Kansas. If you had told us back then that we were going to be a rock band playing 150 shows a year, we would have laughed in your face! I started leading worship on our college campus of MidAmerica Nazarene University my sophomore year and I needed a drummer and a guitar player, which is where Blake and Darren came in to play. Slowly I started writing my own songs and trying them out at various camps and retreats, and people started liking them. So I kept writing. We decided to call ourselves a band and added Ryan and Ray soon after. It was when we started praying for a van and a trailer that we got a glimpse of God's blessing into this. We finally got serious about praying for God's provision, and two days later we were given a free trailer. God had our attention. Since then we've signed with management, a booking agency and a record label. To us, these have been constant confirmations that God still wants us right where we are."

After signing with Sparrow in 2011 the band released the five-song 'Samestate' EP. It caught the ear of the reviewers as did the band's full length 'The Alignment'. Jono Davies wrote, "In my review of the EP I said that the Kansas City band have '...really strong songs that are catchy with interesting compelling chords and melodies from a vocalist who has a really strong and fascinating voice'. And now we get to hear more, but can this album continue where the EP left off? From listening to the album a few times, it is clear to see that the EP was purely a sample of better things to come. Even tracks that I previously thought were my standout tracks on the EP now sounded bigger and better on the album when played next to other bigger and better songs. If you were impressed with the pop rock sound of the EP then this album is a must have. . . Every album has different styles of songs but on this album there is actually a rhythm and feel to it that keeps the flow of the whole album together. There are some truly stunning tracks on this album, I mean truly stunning, from the heartfelt raw tracks to the out and out anthems. This is what Samestate are about. . ."

Dalton was asked if he wasn't making a living in music what kind of work he'd gravitate to. He responded, "Well, seeing that every man in my family tree has been a pastor. . .I'm guessing I would go into youth ministry or something like that. Although now it's hard to imagine doing something different when I'm so passionate about this!" 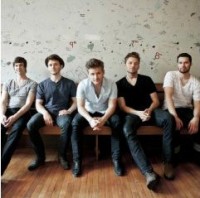 Particularly important to Samestate is a close relationship with their fans. Said Darren Harms, "This is a community. We want to offer what we can because we're also going through life's struggles and it's great to be able to offer help, advice and encouragement to each other and to the people we meet on the road." Diehl agreed, "We want to be that accessible and open to what's going on in the peoples' lives who come to see us. That's a great part about being in a band."