Students of the development of US contemporary Christian music will tell you that before all those Jesus music artists emerged in California in the '60s, "folk mass" artists had established themselves all over the American Catholic church. And indeed, down the decades there have occasionally been Catholic artists like John Michael Talbot making a major contribution to the American music scene that is still dominated by Protestant believers. But there are an increasing number of Catholic artists finding a large following beyond their denominational confines. And since the establishment of World Youth Day in locations around the world, the Catholic church has now actively encouraged musicians in a wide range of styles. Worship leader Matt Maher and singer/songwriter Audrey Assad have both broken through to national and even international popularity. Now Audrey is taking up a new role as record producer to bring to everyone's attention another highly talented Catholic singer/songwriter. With the release of her Assad-produced album 'Bloom' (2019), Sarah Kroger is well on the way to finding a large support base.

Budding artist Sarah Kroger is no stranger to life centred around the importance of Christian music. Despite being from a small town in Melbourne, Florida, given her role as a worship leader she is more than comfortable with large crowds. This coming summer, Kroger will be travelling to Staffordshire, United Kingdom to perform at World Youth Day in June and Life Teen Camp UK in August, marking her first performance in the United Kingdom. Having released her first two albums as an independent artist, she has recently signed to label Integrity Music indicating her strong presence within the American Christian music scene.

Music ministry is something that very much runs through Kroger's blood. Growing up, she became enthralled with Christian music as her parents were both involved in parish ministry and music themselves. Following in their footsteps by singing in choirs both inside and out of the church, Kroger soon began to seek to develop her musical abilities elsewhere. She attended Rollins College in Florida and gained a degree in Vocal Performance and soon gained a taste of what life as an artist could entail. Supported and encouraged by artist Josh Blakesley, she started to share her unique musical abilities more publicly at Steubenville Youth conferences and Life Teen camps.

Unfortunately, it was not all plain sailing for Kroger as she had a turbulent period during her childhood. Firstly, during school she remembers learning about the Church's social justice teachings yet she said that "she found it interesting, but it was never something that was personal to me." The separation she felt from God manifested itself into her living "a lot of my life afraid - afraid of what it would look like if I was completely and authentically myself." This apprehension was furthered at the age of 10 when her parents divorced. This not only caused division in the church where her parents ministered, but also her family. Having moved away with her mother and siblings, Sarah entered a negative period in her life as she felt that God had left her to fend for herself. Over time, through meditation and prayer Kroger found a path back to God. As dark as this time was, it only strengthened her relationship with God. She now has the disposition to answer key questions that people face on a day-to-day basis, such as whether an individual is good enough to prosper in society. 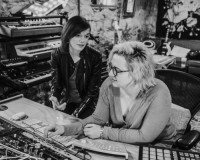 Kroger entwines these questions and answers in her music. Her 2011 debut album 'Your Time' was inspired by answers to such questions from scriptures. Two years later she released a mini-album, 'Hallelujah Is Our Song' (2013), which reflects upon the prevailing presence of prosperity and hope no matter the negativity of a situation. Later in the same year, Kroger was invited by Catholic Relief Services to go to Ghana. During this time she was able to visit several Fairtrade projects, including one in which women were provided with fair wages and a safe working environment, which opened her eyes into the power and importance of ethical trade. She stated that "the fact is, ethical trade is a pro-life issue. We are all consumers. We all purchase goods, and every single thing we purchase is attached to a human being in some way. As Catholics, we have a responsibility to recognise that where we decide to spend our money effects lives."

Following this, Sarah was given the opportunity to perform internationally, including the JubilMusic International Christian Music Festival in San Remo, Italy and World Youth Day 2014 in Brazil. Furthermore, she leads youth and women's retreats and workshops on prayer yet also remains true to her roots and continues to lead worship in parishes. Being both a singer and a songwriter, Kroger co-wrote "When I See You" for Assad's album 'Evergreen' (2018). Regarding signing with a label, Kroger noted that she "didn't think it was even in the realm of possibility" but was "reminded that nothing is impossible for God." 'Bloom' builds upon her previous messages of hope while underlining her core identity as "Beloved". This is encapsulated through the metaphorical connotations of the album's title 'Bloom' which carries the idea that, given the love and nurture it needs, the closed bud of a flower eventually blossoms into its beautiful and true nature. Combining this love which comes from God and Kroger's own love for God, 'Bloom' encourages its listeners to dream big and prosper through the messages of the strength of God's limitless love, despite the struggles that one may encounter. An article from Step FWD - a UK Christian music website - noted that Kroger said that "it's my hope that this collection of songs will lead people to an encounter with God, whether they're in their car or at work or a church event or even at their lowest place and need something that will bring a moment of respite and peace."

Gathering people together from all religions and cultures under a common love for God, Sarah spreads a universal message of hope no matter how dark an individual may feel their situation is. Her passion to create a reflective and secure environment for prayer projects further than just within the church environment. As Andrew Osenga, Director of Artists and Repertoire for Integrity, said, Kroger's "heart for the Church and for bringing new expressions of intimate worship to the liturgical world is inspiring and much needed."

The opinions expressed in this article are not necessarily those held by Cross Rhythms. Any expressed views were accurate at the time of publishing but may or may not reflect the views of the individuals concerned at a later date.
About Rhiannon Graham

Rhiannon Graham is a recent graduate from Keele University with a degree in English, from London.