The recent release in the US of the album 'The Waiters, The Watchers, The Listeners, The Keepers, And Me' by Sarah MacIntosh has finally brought back into the spotlight one of the most critically acclaimed singer/songwriters to have emerged in the last couple of decades of American CCM. For it was in 1999 that Sparrow Records released the album 'With Abandon' by a trio from Fort Worth, Texas called Chasing Furies. Consisting of three siblings, Sarah, Joshua and Rachel Meeker, the trio were unlike anything the Christian music industry had heard up to that point. (Apparently their dayglo hair and multiple body piercings when they attended the 1997 Christian Artists Seminar in Estes Park, Colorado created something of a sensation too.) The Chasing Furies sound was difficult to classify (one critic suggested Radiohead meets Over The Rhine while another suggested music somewhere between 10,000 Maniacs and the Indigo Girls). What all the critics were agreed upon though was that Sarah's haunting voice and enigmatic lyrics were a winning combination. The much praised 'With Abandon' produced one small US Christian radio hit, "Enchanted", but quickly the group fell off the radar.

Sarah, now married to musician Jonny MacIntosh (previously with the band Reality Check and later with mainstream rockers Luna Halo), has now made her return to the scene and like the album with her siblings, 'The Waiters, The Watchers.' is already picking up rave reviews. She told Christianity Today what she's been doing the last few years. "The second year after Chasing Furies ended, I went on tour with Michael W Smith, singing background vocals and playing acoustic guitar with him for his 'Worship Again' CD. That was a lot of fun for me. Right after that, my husband Jonathan and I moved to San Diego, where his family is and where he grew up. He is the music director of the church and we lead worship there frequently while also travelling and [performing music elsewhere]."

Sarah is the first to admit that she has taken an 180 degree turn from the introspective, cryptic lyrics of Chasing Furies to praise and worship's open declarations of faith in Jesus. Why the change? "It's interesting because I had thought that since the Christian music industry didn't know what to do with my Chasing Furies record, that I'd never make a Christian record again. But after I sat down one day to take a look at the songs that I had been writing, I saw that they were even more obviously Christian and there was no way a mainstream or non-Christian market would have that record. So here I was again making a record for the Church knowing that it was what I was supposed to be doing all along. The songs showed that."

Sarah is very pleased with her first solo album. "My husband Jonathan produced it all and played all the guitars on it and actually played a lot of bass on it as well. We were able to get Vinnie Colaiuta to play drums who actually used to play drums for Sting. He plays all kinds of session work. It was really a huge blessing that we were able to get him. And then a good friend of ours, Brent Milligan, played bass. He produced half of the Chasing Furies record so it was good to have him back. One of the things that I think is gonna surprise people is a lot of times people thought of Chasing Furies as being this very artsy, not-you're-typical-CCM record. This is the kind of record I want to make. I just sat down and thought about what songs would express who I am right now. There are some very worshipful songs on there. There's a song on there called 'Be Glorified' with totally worshipful lyrics. And then there's a song like 'Sunshine', on the other hand, that could be anything. There's a song called 'Did You Know' that could totally be pop radio, and pop people would not necessarily know it was a Christian song. But if you're a Christian, I hope most people would know... hopefully they would say, 'OK, this is what she's talking about. I can identify with that.' I'm excited that it's totally a representation of who I am. You're gonna sit down with me and see a side of me that doesn't look like your typical CCM artist, but then hopefully if you're listening to me talk, you're gonna hear 'that girl's a Christian and she loves the Lord.'" 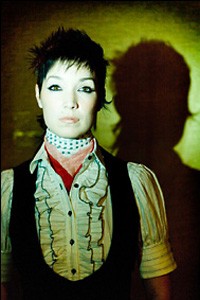 Sarah says that it is hard for her to say what is her favourite song on 'The Waiters.'. "It depends on what I am going through at the moment. What things do I need to remember about the Lord and remind myself about? Is it to be watchful for his return, like I sing in 'Sunshine'? To remember that he only does wondrous things, as 'My Jesus' states? Or do I just need to remember that even though life is crashing down around me and things don't make sense that he does make sense of it, and that I know who he is - holy, worthy, Abba - as I sing in 'More Than Hands'. Perhaps that's the one that I need to sing the most right now: I know who he is."