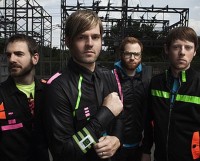 Geoff Hunker, vocalist, composer and guitarist with Satellites & Sirens, succinctly describes his band's style. "We have a modern rock band sound with a lot of loops and beats and '80s synth influence." For Cross Rhythms radio listeners currently grooving to the Nashville band's "All We Need Is Sound" track that pretty well nails it though Cross Rhythms' reviewer does pretty well when he talks about the "incredible" production on "All We Need Is Sound" "that has the guitars swirling around the stadium like a tornado" while the soon-to-get airplay "Breaking Noise" is said to be "a major international hit if it ever gets the exposure." So who is this band whose reputation is growing so fast?

After Hunker moved to Nashville and began working with producer Rusty Varenkamp on what would become Satellites & Sirens, he realised he needed to assemble a band. He placed a want ad for band members on one of cyberspace's most popular bulletin boards, Craig's List. "I just put up an ad looking for guitar, bass and drums to just see what happened," Geoff explained to the newreleasetuesday website. He continued, "Jonathan Dimmel our now drummer showed up and blew me away, and the rest of the band (guitarist David Troyer and bass/synth player Brandon Owens) came through people and connections he had. We all had a foot in the '80s and loved bands like Jimmy Eat World and Death Cab, so we all got along great and had similar vision for where and what S&S would become."

It was Satellites & Sirens' producers, CCM hitmakers Jason Ingram and Randy Varenkamp, who helped the emergent group land a deal with Christian music giant Word. Explained Geoff, "The producers we were working with had a great relationship with one of Word's A&R guys, Conor Farley. Conor was always looking for something a little outside of the box and really took a liking to our earlier demos and he took a chance on us!"

The band's first relese was the digital three-song EP 'All We Need Is Sound'. The title track picked up radio play and with the band gigging all over the US the buzz about S&S grew steadily. At the time of their first EP release Geoff spoke about the theme of several of the band's songs - man's alienation from God brought about by the hustle of modern life. "We get up and we fill ourselves with so much stuff. You know, I go to sleep with my TV on, and I wake up with my TV on. So it's noise all the time. And we busy ourselves so much that a lot of times we miss out on hearing what God's direction is." 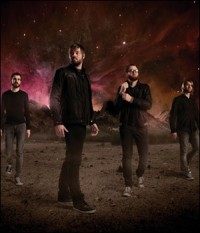 The band's second download EP 'Breaking The Noise' was released in October 2009 and again it connected with a young audience intrigued by the rock/electro fusion. Now at last the full length 'Satellites & Sirens' album has been released Stateside (and soon in the UK, through Kingsway). One critic has already enthused, "'Satellites & Sirens' is full of songs that artfully balance the electronic buzz of synthesizers with modern rock guitars over the top of interesting grooves." Drummer Jonathan Dimmel spoke about the unexpected return to mass popularity of synth-driven music. He said, "I think it makes people our age like feel like a kid again. It brings us back to things that we enjoyed when we were kids - like the Nintendo-type sounds and the '80s pop, Michael Jackson beats. All these things we think of, when we were kids."

One of the most powerful tracks on 'Satellites & Sirens' is "Take Me Back". Hunker talked about the theme of the song. "'Take Me Back' is basically like a prayer. It's that realisation - coming to that point where you're like 'the path that I'm going down is not right.' It's saying, 'I've come to that point where I know I need God - I know I need grace and forgiveness.'"