Scarecrow & Tinmen: The US rock team haunted by The Wizard Of Oz

An intriguing American rock team with an intriguing name SCARECROW & TINMEN are "out there". Mike Rimmer met them. 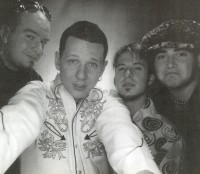 I first fell in love with Scarecrow & Tinmen's music a couple of years ago when I discovered a song called "Groovy" on a compilation album. Then they were just a name and a cool song but now it's a little disconcerting to find myself being hugged at length by guitarist Brad Derosia. This is even more strange because we've just been introduced at a record company meet'n'greet function and obviously handshakes aren't part of Brad's social skills. Then again it could just be that these guys are a little erm out there!

This isn't Kansas but neither are we over the rainbow! Instead we keep meeting during my week in a Nashville hotel and eventually we get the chance to chat. Main songwriter Chris Padgett explains the band's name,."In The Wizard Of Oz the Tinman needed a heart and the Scarecrow needed a brain and we're told in Hebrews 8 that as Christians we have a new heart and mind." Simple really! The album is called, 'No Place Like Home'. "It really is resting in the reality that Christ is our home, he is the reality for our existence."

In hanging with the guys, I note that it seems to be the general ethos of the band to have as much fun as possible. The band claim that all the members suffer from Attention Deficit Disorder! Bass player Matt explains helpfully, "We all have very short attention spans." Okay, so that's it! Certainly, there is a collective sense of humour that spills over into everything that they do. Padgett agrees, "We eat as much sugar and caffeine that we can so we can reflect in a creative way that Christ is alive. We are definitely involved in presenting a whole side of the body of Christ that many people are not aware of, which is laughter. I think that laughter heals a multiple of wounds."

I express sadness that "Groovy" didn't make it onto their debut album with Pamplin. They explain that they wanted to include the song but producer John Elefante didn't like it. Interestingly when I meet Elefante later in the week-I decide to tell him off for not choosing the song. Enigmatically he denies all knowledge of hearing it and only says, "Maybe next time_"

I ask Brad about The Wizard Of Oz fixation and he jokes, "We all actually dress as Dorothy at the weekends." He keeps a straight face for all of three seconds before bursting out in an outraged tone, "Not really, that's a lie!" He laughs and says, "We just really liked the movie a lot. And it hit Chris like a bolt that Christianity in a way can be a reflection of elements that are in the movie." The group formed in 1994 when Roman Catholic Christian singer/songwriter Padgett teamed up with Brad DeRosia (guitar, programming). They released three independent alms 'New Heart And Mind', Technofolk Road' and @new Heart And Mind 2' before signing with Organic Records.

The band's live set is a mixture of high-energy fun rock'n'roll with all the stops pulled out but then there is also time for ministry and the band take it seriously. Their live set in Nashville during the GMA conference creates quite a buzz. Drummer Darren Yoder explains the thinking, "Because the live show we do is very chaotic and crazy, it warms people up to us and they're open to what we say. After the shows we're always talking to the kids."

Their album is produced by Dino and John Elefante and listening to it, one song powerfully stands out. "You Are My Son" was written by Padgett and he explains, "When I was a child my parents divorced and I think that for years and years I had problems seeing God as my father. Realising that he was holy and righteous and worthy of worship was easier for me to understand than the idea that he would never leave me or forsake me. And I think God began in me a revelation of his love. And this song is a realisation of God's love for me. Even if people come from backgrounds where their parents haven't divorced, there are still problems as parents are not able to show perfectly that unconditional love God gives us because of the world that we're in. There are manifestations of anger and violence rather than the fruits of the spirit. This is a song that reminds us that we have a God who is huge and loves us so much that he calls us son."

Scarecrow & Tinmen are an exciting blend of fun, ministry and energetic songs who have finally got the chance of taking their music to a wider audience. They'll win fans because they care; oh yeah and because they're crazy! Later on as I wander around the hotel, I find the band being interviewed by a radio DJ sitting at the end of a corridor. Unusually, I find myself unable to resist exploring the comic possibilities of pulling strange faces at Padgett in an attempt to put him off his stride. Sadly he doesn't miss a beat!