Trip hop meets Indian music? Arabian drum'n'bass? One of the most intriguing musical experiences in this year's Cross Rhythms fest Mega Tent is going to be when techno meets ethnic world music under the auspices of THE SECRET ARCHIVES OF THE VATICAN. DJ Coopoid reports. 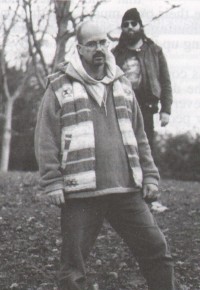 Secret Archives of The Vatican

The Secret Archives Of The Vatican have always sought to go musically where no man has gone before. The journey continues! into new territory with their 11th privately released album, their first on CD, called 'Reformation'. The [Secret Archives, until recently, have just been one man and his imagination, Croydon-based Vincel Milieu. However, during the last year his greatest fan and good friend Louis Counter joined the crew to add yet more musical influences to the already somewhat eclectic soundscape.

Vince recalls how it all began for him. "It started off with me just being really into music. I started playing guitar probably quite late, in my late teens. Sometime in the late '80s I finally got round to getting my first four-track cassette recorder, and right from the start I felt very strongly that I wanted to get my music out there, not just sitting at home waiting for a mythical record deal or any of that. I thought I'd just record little albums, duplicate them myself, do the cover artwork myself and just get them out there into the real world, which I did. I never really sold many of them but I always covered my costs and gradually learned the art of putting music together. The name Secret Archives Of The Vatican came from a book I borrowed from a public library many years ago. I don't know if I ever got round to reading it, but I eventually managed to smuggle it back into the library seven years overdue." Some fine that would have got!

So what came first in Vince's life, and interest in God or music? "I've been a Christian since about the time l started playing," he remembers. "I grew up in a Catholic family, went to Catholic schools and so on, but I really became a Christian when l was about 19." So does that mean faith and music go hand in hand for Vince? "Yes. I suppose partly because in Christian circles you're suddenly surrounded by acoustic guitars and tambourine bangers, so I went from a non-musical background into one where I was being assaulted by three chord strumming on a regular basis."

Now it's Louis' turn. How did he get to team up with Vince? "I met Vince in about 1987 when I joined the same church that he was going to. In about 1989 when he released the first tape, I bought a copy more out of generosity to a friend than out of actually enjoying the music. I think I'm one of the few people on the planet who's actually got everything he's ever done. I gradually got more into what he was doing and also my music tastes changed. When l became a Christian I was listening mostly to rock and pop stuff, back in about 1985. In 1987 I got into heavy metal in a big way and in about 1992/93 I started getting interested in dance music and also into this world music sort of stuff. Hanging lout with Vince tends to do your mind in a bit, so my music tastes changed quite rapidly. When he played the Cross Rhythms festival in 1996, with a guy called Michael Ray, I gave him a hand putting some of the tracks together. We got some really nice Babylon 5 vocal samples together and built some stuff. Then last year we started working together with some new equipment and it's really just been this project where I've been involved in actually working with the music rather than just as a mate giving some advice, listening to stuff and selling tapes to my| mates."

The genres of dance and world music have been mentioned. To my ears they are the main ingredients in 'Reformaton'. Louis confirms my interpretation. "The main concept to Secret Archives I think for Vince has been always to take different styles of things he was listening to and trying to push them together into one cohesive lump of music. I think at the moment what we're listening to most is dance and world music."

Vince carries on, "Yes, I've always tried to mix the things I like - Indian sounds, dance music - and we both like seriously heavy bass. We both like break beats; we're listening to a lot of drum'n'bass and trip hop and so on as well as Arabic and Asian music. So we just try and mix the lot together. Part of the core philosophy of what we try and do is really based around the idea that anybody can make music if you get a few bits of gear together. You don't have to be signed to a record company, you don't have to have vast amounts of money. If you've got some ideas and talent, you can put some stuff together, stick it on a cassette, photocopy some covers and just get it out there. Be creative and just keep making music. Somebody somewhere will like it." And to prove that point, they've had radio play in at least six countries, just off cassette, and have received some great reviews from all sorts of places (including this magazine). I've even played some myself on UCB Cross Rhythms!

To Vince and Louis, the DIY approach to releasing a CD is very important. To many, it may seem like a lot of hard work and hassle, but they see the advantages of being independent. Vince explains, "We don't have a very positive view of record companies generally, secular or Christian, mostly because of the way the industry is run, and unfortunately the Christian side of it isn't run in any better a moral climate than the secular one. Generally, the way a record company works is that an artist signs to a record label, the record label ends up owning the copyright, the artists themselves pay for all the recording, distribution and everything out of their own royalties. I think we just got to the point where we thought 'why accept that?' There's nothing that a record company does that we can't do ourselves. We can arrange manufacture, artwork and distribution ourselves. That means we retain copyright. Christian labels unfortunately in this country have no money and put almost nothing into promotion. I've never ever seen any Christian bands on a Christian label being advertised in the normal music press, so they put no effort whatsoever into real promotion. We think it's very strange that people in the Christian world seem to think it normal that you buy CDs in a bookshop. We think the place for CDs is in a record shop! So although we may well end up distributing in the Christian scene, what we really believe in is just getting out there into the real music world. We'll be advertising wherever we can afford it and we're not going to draw a line between the Christian and the secular scene."

Vince continues to explain how this philosophy fits in with the musical ideology. "We just want to have the kind of creative forum that for example someone like Peter Gabriel has down at Real World, where you've got this core of people, which effectively is Louis and myself, working on these musical projects that don't really have any limitations musically: anything can be brought into it, anything we like. We can use all kinds of musicians working around us as the core, and just to continue to put out as much music as we can which really pushes back boundaries is creative and original, and which breaks down the barriers, which the industry says you, can't transgress. We want to mix things that they say you can't mix. We want to do things on the business side of things as well. We want to change the way people think. This kind of worship of record companies, we want to break people out of that and to let them make their own music, creating and distributing it themselves. Just freeing up the whole thing, really."

Louis concludes, "It's about making all the different things that we like, however bizarre they might seem to other people, and making something new and exciting that's good to listen to. Very much with the record company, everybody waits for this mythical deal, expecting it all to change, and 90 per cent of the bands that eventually get a record deal, which is about one per cent of the bands wanting a deal, go nowhere because no one will invest in them. They're then stuck in a situation where they can't make any music and they can't release music because they've got a contract that won't let them. I just think that's criminal, I think if you can do it, go do it, enjoy it, and if you're not worried about making money out of it you might actually be successful. Once we've sold a couple of hundred copies at about Â£10 each we're in profit and we're getting the money, which is a much better way of doing it."

Not that it's about money. The musical creativity and expression is far more important. And longer lasting!