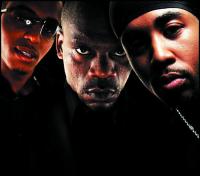 Seven. A perfect number and, if Christian music label boss David Palmer has his way, a perfect channel through which to spread a positive message to millions of hip-hop and R&B-loving youths around the world. P2 Music (the name is an abbreviation for Perfection 2nd Generation) is an independent label with a mission statement in the truest sense of the term - to provide a platform, via the positive lyrical content of their releases, for fans to negotiate negative situations and come to fulfill their full potential.
It's a simple concept and one that thousands of Christian artists try to promote in one way or another every day. But P2 are not a company to do things by halves, and have conceived of Seven, a collective of internationally acclaimed Christian talent, to provide the means to reach their target market. The members of the group hail from diverse backgrounds, both here and in the USA.

Top British singers Tony Momrelle (a member of R&B group Incognito and a former backing vocalist with Elton John, Celine Dion, Gloria Estefan, Sade and others) and Ricco King (vocal coach to Liberty X, Mis-teeq, Lisa Maffia and Girls Aloud; backing vocals arranger for Westlife and Gareth Gates) team up with New York-born rapper Grim on Seven's debut single "There It Is" has received extensive club and radio play. Other team members include American gospel artist Kim Burrell (a Grammy winner), hugely popular R&B singer Joe, reggae star Papa San and the Ignorants, producers to such heavyweights as Craig David and Britney Spears. The plan is for these talented individuals to collaborate on a series of albums, one per year, to maintain the continued influence of the uplifting material they create. The first album, 'Let There Be Light', is complete and will be released any time now.

The band is thrilled with the early response to "There It Is", a tale of three characters and their everyday problems who are able to find the strength to prevail within themselves, set to smooth R&B beats. Says Momrelle: "The support is wonderful. We've tried not to ram the message down people's throats, and I think we've combined the commercial and urban aspects of the track very well. It's effective and could go far, just like any good song by a Christian artist. Look at Kirk Franklin and Mary Mary - they've done the same thing." More support has come in the form of the track's inclusion on the soundtrack for the upcoming film One Love, which tells the story of the love affair between Bob and Rita Marley. Palmer deflects suggestions that licensing the track for such use might be construed as "selling out": "God has given us the vision for this project. We looked at the script carefully and spent time praying about it, and we believe that the association will be very positive because Seven's lyrics will be heard by millions."

Seven and P2 aim to prove that "Gospel" is not a record-store shelf label but rather what Jesus says it is - the good news. They are investing in their beliefs, too, giving Christian music the financial and critical muscle it deserves and packaging it in crowd-pleasing formats - R&B and hip-hop tunes are topping most charts across the planet just now - for maximum effect. Looking for encouragement? "There It Is". Right there.