Shane Harper: An actor and singer proclaiming "God's Not Dead"

Tony Cummings reports on the star of the hit movie God's Not Dead, SHANE HARPER 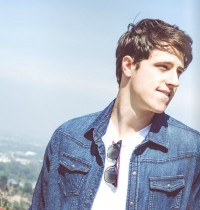 Cross Rhythms radio listeners will currently be enjoying the Mumford & Sons-styled "Hold You Up" by Shane Harper. And those of you who keep up to date with Christian movies will know that the track emanates from the soundtrack album for the feature film God's Not Dead. That particular film is another of those movies which flies in the face of the long held perception that a production with an overt Christian theme cannot be any good and/or is bound to do badly at the box office. (Concerning the latter point, the budget for God's Not Dead was two million dollars and it has so far made $62.6 million.)

The soundtrack for God's Not Dead features several renowned Christian music acts including Jimmy Needham, Stella Kart, Superchick and Tricia Brock plus, of course, the Newsboys who also appear in the film singing their rendition of Daniel Bashta's "Like A Lion (God's Not Dead)". The star of the film is former Disney actor Shane Harper who after appearing in four series of the Disney Channel hit Good Luck Charlie also appeared in the movie Flipped and even landed a small role in the Bollywood film My Name Is Khan. But music too is a "huge passion" for the 22 year old actor who was born in La Jolla, California.

He told John van der Veen, "I grew up playing music. I'm currently working on a full-length record. That's kind of obviously a huge goal of mine to get it out as soon as I can. Getting to do a song for the film God's Not Dead was really cool. I'd love to continue doing that. It's fun being a part of the film, and then them coming to you after, in post production saying, 'Hey, can you do a song for the movie? Because we know you write music.' It's kind of a cool thing to be able to do. It's an interesting story behind the song because I'd actually written the chorus of 'Hold You Up' probably two months before I ever auditioned for God's Not Dead. Then when they came to me to write a song for it, they said, 'Hey, do you have a song that kind of goes with the flow and the vibe of this storyline, the narrative?' I said, 'I don't.' 'Can you write one?' I was like, 'Yeah, I guess I can write one.' Then a couple days later I remembered, 'Oh my gosh. Half of it's already written. I wrote this song that's perfect. I just need to go finish it.' We finished it and it ended up working great for the movie."

From an early age Christianity has been a key part of Shane's life. He said, "I think there was always a genuine love for Jesus there. I really felt like I knew God from a young age. I don't think much [of] it is was really phony or fake or like I was pretending, but I didn't realize the weight of what Jesus did for me or what the implications of Gospel-centered Christianity meant until I was in my early teens. When you get to a certain age you start asking questions, and you start saying, 'Well, why do we do this and what's the purpose of that, and where did we get the Bible?' Just one day I thought, 'Where did the Bible come from? We're reading this as an authoritative book. We're living our lives for this book. Where did we get it?' 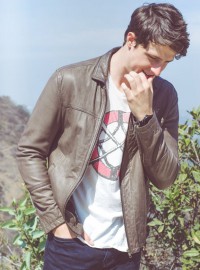 He continued, "You grow up in the church community and you almost kind of just take it as it comes because you're like, 'Well, of course this is how it is, and this is how we do things, because we're Christians, and we go to this church.' I think that honestly through a lot of different circumstances and also the beginning of my involvement in the entertainment industry, I started asking different questions. It was the beginning of, 'Okay, well, what does my faith look like, and how do I talk to people about it, and what does it mean for me?' It just became a lot deeper and more settled in my soul. I was restless but kind of settled at the same time. I don't know how to describe it. Through a lot of really great Bible teaching by guys like Timothy Keller, Matt Chandler and Mark Driscoll that the Gospel began to sink in more deeply. I remember sitting in my parents' room and we were listening to a sermon by Mark Driscoll. He started to expand on Martin Luther's The Great Exchange, where Jesus gives free grace to you, and it's yours. You didn't do anything to earn it.

"I remember at that moment thinking to myself 'this is so much more real and life changing than I could have ever even realized.' Obviously it's a long process of going through these walks and these seasons, but I do remember that well and just being like, 'Wow. I haven't heard it like that.' I hadn't felt Jesus pressing on my heart like that saying, 'Do you realize the weight of this, not only for your life, but in the life of your community, because you live in light of that?' Tim Keller always talks about these floors in your soul - where truth embraced or realized sinks lower. There's always another floor, and this elevator just drops lower and lower and it happens throughout your whole like and for me, it just started to plummet. It just dropped. It's really a wonderful thing to talk about because it brings a lot of joy."

Shane was asked what it was like working in the ego-obsessed hedonism of Hollywood. He responded, "When I hear the question, 'What's it like being a Christian in Hollywood?' I immediately think, 'Well, being a Christian anywhere in the world more or less means the same thing from a heart perspective of how you're supposed to serve and love your community.' Right? The culture that God puts you in, to love Jesus first and to love our neighbours as ourselves, and to live in a posture of service to those around us. That's what it means literally to be a Christian in any culture and any community, to share the heart of Jesus with people and have that posture that Jesus had. He's washing his disciples' feet. The King is washing the feet. That kind of picture he paints for us in terms of how to live lives that are really emulating the heart of Jesus is so powerful.

"There's kind of this universal thing that everyone's trying to get at, and a lot of times we try to find it within ourselves, some kind of thing we can do. Or we try to find it outside, something that we can serve, something we can dedicate our lives to. Sometimes when you're working on a set or something, it's like, 'Can you grab me a _____? Can you do this for me? Can you do that for me? Well, I need this, and I need that.' Sometimes people naturally go into service mode. You're an actor on this set. How can we service you? It's not right. That's so contrary to how you're supposed to live with someone saying, 'Well, what can I do for you? How can I make your day easier?' That's awesome that there's people that want to do that. It's not like being on Hollywood set's this fanciful thing where people bring you lattes and pampering you because honestly a lot of times it's not like that."

Shane continued, "God has called them to do their work well, and to serve well within that job, and within that community and culture, but for me, when I show up to a set to work, what my relationship with Jesus does for me, it tells me this is not just a job. This is not just a moment to be the most paid-attention-to person in the room or on the set. It's not an opportunity to indulge in that kind of natural narcissism that my heart wants to grab onto. I need to be saying, 'What can I do for those people on that set?' Those are people that you're there to serve. That's the idea. You're on a set, and your co-workers and the writers and lighting and props and the directors, the producers, the DPs, everyone involved is the community that you're called to serve on that day. Honestly, it's funny because talking about it, it makes it sound like I show up to these sets in all of my serving glory, and I just have this great mindset like, 'Oh, I totally got it down in life. This is what I'm doing for the people that I work with.' Honestly, just being completely upfront, I forget about it constantly. Weeks will go by. Months can go by, and I'm like, 'What am I doing? What does my job mean? What does my job mean today? God's called me to do this, and to do my job really well, but how has he called me to treat the people around me?' I think the Gospel always challenges your values and challenges what you believe to be the most important thing.

"People are always like, 'Well, Hollywood. It must be so hard.' It's hard everywhere. Everyone in the world living in their communities and their cultures has a call to live a life of service. It's the same everywhere. I think generally wherever people are living and doing their work, wherever God's called them, I think that's kind of a sense that we need to have in terms of where you've been placed. I know that I'm really grateful to be here, and I never really thought I'd be living in LA, and being a part of this community. The diversity of culture in Los Angeles is really amazing. Honestly, there's like a million different pockets of communities and cultures, and it's such a wonderful opportunity and such an amazing place to grow."

That's Awesome I would love to meet you