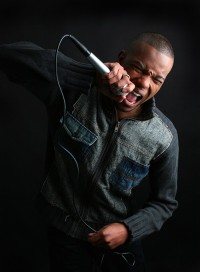 In the world of hip-hop there can be few rappers who have made such a dent in the mainstream hip-hop world as ShaoDow - having supported the likes of Chase & Status, Skepta and Chipmunk; appeared on Tim Westwood's renowned radio show; had a song at number four in Oxford's Top 20 (Radiohead was number three); and performed at Reading and Leeds festivals - yet all without the help of any record company, publicist or manager. ShaoDow (pronounced Sha-ow-dough) is the very definition of a DIY artist. He's managed to sell over 18,000 copies of his two albums and there's a much-watched video on YouTube of him selling his albums in a shopping centre.

One thing that many of his growing legion of fans haven't yet grasped is the part faith plays in ShaoDow's life. He declared, "I am a Christian. I'm a full believer in God and I don't believe I would have done any of this without his blessing. It is my path." ShaoDow grew up in the Lewisham and Catford region of south London. At the age of 18 he travelled alone to China in order to learn Shaolin Kung Fu. It was there that he discovered a true love for the art of music and lyricism. This love grew with him throughout his time in university and he began recording hip-hop in his home studio. Unwilling to wait for the industry to "discover" him ShaoDow, after graduating with a Law Degree, made the bold, albeit risky decision to become a full-time rapper and music business entrepreneur. He told Cross Rhythms, "I've been making music over 10 years, but only taking it serious the past five years. In terms of whether it's difficult, 100 per cent it's difficult. I'm a firm believer in doing things which are difficult: I don't believe anything worth doing is easy. I love the journey - not just the prospect of where it's going to lead to. I enjoy the hard work, the difficulties, the struggles that eventually help to make you a better person as well as a better artist. I'm thankful."

In 2012 ShaoDow released his debut album 'Cut The BullSpit' which was enthusiastically received by the hip-hop underground. Said the emcee, "'Cut The Bullspit' was experimenting with the idea of building an album. What did I like? What did I want it to sound like? What sort of genres did I want? What sort of concepts did I want?" By the second album ShaoDow's ability to rap over all kinds of rhythms including dubstep, rock, grime, house and jazz was fully brought to the fore. 'Kung Fu Hustler' reached 31 on the iTunes Hip-Hop charts. He commented, "The general overarching theme for the album is inspiration and hard work. It's called 'Kung Fu Hustler' and the direct translation of Kung Fu is 'hard work'. Essentially it's documenting my journey as a new artist, talking about how I go about doing things, how I'm trying to build something great for myself through hard work and engaging with people. The subjects I talk about range from racism to working smart; I have more fun tracks, for instance 'Liar', talking about guys who go to the club and lie to women. I try and keep it intelligent but accessible. You have to bear in mind the audience I'm speaking to - it's young people, it's people who normally hear a lot of swearing, guns and negativity. You have to engage them in a certain way, but also provide them with an alternative to the sort of music that's already out there."

Although there are references to the Lord on 'Kung Fu Hustler' it's a long way from being a gospel rap album. He admitted, "While I have a lot of respect for gospel artists, I think that when you're a gospel artist you're restricting your listenership to people who have already come to expect that message from you. Sometimes the people you need to speak to are the ones who aren't listening. For me, I love rap, I love hip-hop, but I never felt they were speaking to me. The do-it-yourself attitude came into it from that point: I had to put my perspective, my thoughts, what I believed in onto paper; and it turned out there were a lot of people who wanted and needed to hear that." 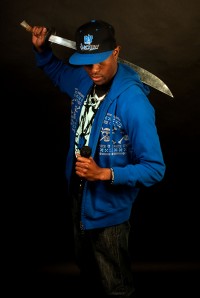 In addition to selling his albums ShaoDow and his business partner Zuby run the DIY Gang shop, selling supporters jumpers, t-shirts, jackets, hats and now DIY Gang Wireless Headphones which come with not only 8GB of MP3 storage, but ShaoDow's brand new album 'Kung Fu Hustler' already pre-loaded onto them.

ShaoDow has a pretty jaundiced view of today's music industry. "I know what the music industry is like; it's very, very fickle. When you're a slave to the industry and the politics involved, you're forced to play that game - which is the part of the reason I do things the way I do and avoid being associated with the industry as much as possible. It allows me to do what I want to do, be who I want to be in the way that I want to be it, without having to worry, 'Is this going to look bad? Is me being a Christian going to look bad? Is me not being a 'gangster' because I'm black and that's what's expected going to look bad?'."

'Kung Fu Hustler' contains a few swear words though the warning sticker that the front sleeve contains is not an "official" one. "The warning is one I designed myself, because the parental guidance warning normally associated with albums which have explicit material I didn't feel was relevant to my album; but at the same time I was aware that there was the odd swear word on there. I'm aware of the age-range of my listeners, so I try and minimise the swearing. The trouble is when you're working with other artists: it's quite difficult to stifle another person's creativity. It's a difficult game to play. You do have to bear in mind not everyone is going to have your views, your outlook on life; you have to be sensitive. It's a difficult one, but I'm proud of the fact that you can listen to 85 per cent of my album and not hear a swear word."

In view of the swear words that there are including in ShaoDow's rapping art and the fact that he works in cultural areas that are largely unfamiliar to the majority of believers it's not altogether surprising that ShaoDow has experienced difficulty in finding a church which will give him wholehearted support. For the time being it's one or two family members who are bringing spiritual input to the young rapper. He explained, "I'm very blessed in the fact that my family - in particular my aunt - is very involved with the church, and I look to her as a navigator as to how a good Christian should be. It's always good to talk with her, to see her viewpoint, how open and how loving she is because of her faith; it's something I always aspire to. As a Christian you should be able to pray for anybody regardless. I would always be a bit wary about a church that instantly judges without knowing the backstory. When you rap, there's certain connotations involved, but I think you need to look at the bigger picture. People do judge - consciously or subconsciously. At the same time I know, based on the feedback I've had from people who are going through tough times and have listened to my music to bring themselves through it, the positive message I'm putting out seems to be helping in a small way. Even if I can inspire and touch only a few people, to me that's reward in itself." 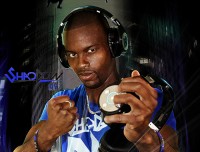 ShaoDow is currently working on a third album and a single from the project, "The Rise", has already been released. He commented, "That single is a bit of a cautionary song, looking at the prospect of fatherhood, trying to think about it. We're in a time when people are having children, in my opinion, a bit too fast. The song is really just trying to get people to think a bit before bringing children into the world. The album is definitely going to be my best work: I've got a lot of subjects I want to cover, I'm going to incorporate a lot more live music into it, and just bring that inspirational and positive message to the forefront a lot more. I want people to look at the journey I've been through and feel there's something there - dig a bit deeper and see what inspires me, to see that the power I believe in comes from a higher power. I want people to think, 'There's something to that; let me explore it a little bit more' - without overtly pushing it in their face."