The American's insist on the unwieldy ShineMK moniker.not that anybody out there has HEARD of Milton Keynes. In good ol' Blighty we're happy with the simpler SHINE. Mike Rimmer and Tony Cummings were illuminated. 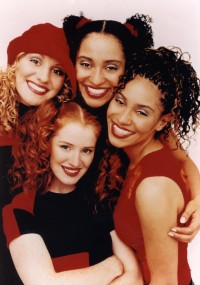 The girls from Shine are in the studio and boy are they loud! Despite being tired from their European tour, they're talking 20 to the dozen demonstrating their new found ability at uttering phrases in foreign languages though some of them sound suspiciously mischievous. World travel has given them interesting perspectives on chocolate and they spend time debating the best brands from different countries though bizarrely all of them think that American chocolate smells of sick. Nice girls, Shine!

It always strikes me that Nicola seems to be a bit of a weird magnet in the band since she gets into strange situations. "I know," she admits, "weird things keep happening to me." The latest episode from the night before involved an incident at the airport where the usual Shine girl hunger got the best of them and they were indulging in what are known as cheesedogs. Unfortunately a couple of yards away from Nicola, Loretta took a HUGE bite into her "dog" and a large lump of hot, melted cheese shot out of her bap and hit Nicola in the face, in the hair and on her jacket! One early morning call later and Nicola still hasn't had time to wash her hair and so according to her band mates the top of her head is hard and smells cheesy! Hmmmmmm.

Shine have recently released their second album 'Keep On Moving' which Natasha describes as "veering more toward the UK R&B/garage style. With the first album, we were still trying to find our feet musically. It was pretty much pure pop that fitted in with the whole 'girlband' thing that was going on then. It's been three years since we first started and part of the vision for Shine was being relevant to young people. Presenting the Gospel message in a way that's relevant to them. We feel the new album really reflects how the musical charts are at the moment. Luckily for us, the more R&B feel is naturally what our style of music is anyhow. So we're a lot more comfortable and confident with the new sound of the album."

The album has been released in Europe way ahead of the American release and there is plenty of debate as to whether the band's new direction will be understood across the pond where UK garage hasn't really caught on. Natasha explains, "Funnily enough, that's the reason why we've had a UK/European release first. The market in America is being flooded at the moment. They've gone for a later release, so there's going to be a few extra tracks on the American version that won't be featured on the European version." The girls admit that those extra tracks are likely to be some bubbly pop songs.

This time around, the girls have been much more involved with the songwriting process. Hanne explains, "It's about our experiences, working with the kids and the questions they've come up with. So we actually sat down and wrote a list of all the issues we wanted to be covered such as materialism, how does God affect your life? The struggles you meet being a Christian...just blatantly honest things. About God inspiring things. We really hope that this will be inspiring to people. So recording it, I felt I could put a lot more into it in a different way because it comes out of experience."

Hanne explains how the songwriting process works for the band. "On some of the tracks, we came with everything to Zarc Porter. We brought examples to him and sat there with him working out the production. With some of the songs, we had done the vocal bits and arrangements while Zarc did the music. Basically, we came up with some songs but then Zarc and Mark Pennells wrote some songs as well."

The current European tour gives Shine the opportunity to road test some of these new songs and also gives them a few new challenges too. Some songs they've been performing live for a long time and although they're glad to have new material there is the challenge of having to learn all those dance moves and all the words to the songs and perform them perfectly. Nicola giggles as she reminds Loretta that she went the wrong way during their last performance. The arrival of fellow Cross Rhythms presenter Steve Best gives us an opportunity to find out first hand about the band's moves as Nicola graciously teaches Bestie an extract from one of the routines. Much hilarity ensues as Steve twists and thrusts and waves his arms around live on my radio show. Not graced with Shine's lithe looks, it is indeed a strange and marvellous sight. Admittedly not great radio though very funny and the girls are gracious about his efforts!

The band have locked themselves into high school culture by creating music in a style that will capture the attention of school kids. Their experience in the classroom has also given them the opportunity to explore some of the themes that have been recurring during discussions. Loretta co-wrote "Don't Turn Back On Love" with Natasha and the song tackles the subject of materialism. She explains, "One of the reasons we particularly wanted to write about that issue was that we just came across so many young people who are looking at their magazines and the TV and are being told what makes them happy. A lot of it is lies. A lot of it does make you happy but it doesn't tell you the consequences of that or how short-lived it can be. Basically, a part of one of the lessons we do is this little survey with young people and it's amazing how the same answers come up every time. It's the main reason for writing the song. There are six main categories that people think they need in their lives in order to be happy. Things like relationships, money, freedom, popularity, career and looks. Part of our lesson is to point out that these things are great but if you base your life on them, what if one goes wrong? Or fails us? Or runs out? What are you left with then? We're putting the question in people's heads, 'What if there is something that can give you lasting happiness and real fulfilment that won't let you down?' Of course, we believe that's a friendship with God. When we do that part of the lesson, you see their brains ticking over. We decided we had to write a song about this!"

There is much talk in Christian and mainstream media about the crisis of the British Church where young people are leaving in very large numbers. A picture is painted that young people are not interested in Christianity and contemporary culture has so secularised their thinking that it's difficult to win them back into the Church. The band are in a unique position to see these effects. In an average school class of 33 students, is it realistic to expect any to be converted after having an encounter with Shine? Loretta responds, "Yeah, I think it is actually." She continues, "It's true that young people are leaving the Church in their droves. Young people are given so many options that it's hard for them to choose a way for themselves. We feel from our experiences that young people are a lot more open to hearing something that's black and white than the Church thinks. I think they've found it quite refreshing when we stand there and say, 'Well, you can believe this if you want but you know what, we've found this to be true in our lives. This works! This is the best! Anything else is second best!' I feel if young people don't see people living it, believing that it is true, they're going to end up choosing nothing. Dabbling with a bit of this and a bit of that.

It could be argued that genuine faith is always going to communicate with people who don't believe. Though this does have its challenges also as Loretta agrees, "Young people can see straight through you. One of the best things that keeps me grounded in my faith is standing in front of a room full of kids! They know if you're living what you're saying. They know if you really mean it, if Jesus is really real. At the end of the lesson they're saying, 'You really believe this, don't you?' Of course they want to experience it if it's real. Not that I've got all the answers at all but part of the problem I think with the Church is that we're too much about presenting the Church or Christianity and not enough about presenting Jesus. If you take the average young person and tell them and show them what Jesus was like, not adding anything, not taking anything away, they're going to want to know more about this man. He was the most amazing man who ever lived. People were drawn to him. I think if we represent him in a real way instead of how young people perceive Christianity, which is about the rules, the regulations. So we're just saying, This is what Jesus was like. We found him to be real in our lives' and young people are so interested in that it's surprising!"