Shirley Caesar: The gospel matriarch comes to London and has church 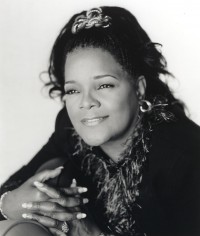 A diminutive 49-year-old woman in a plain white dress walks to the front of the stage, hand on hip, and looks out at the audience. "I'm from the clay hills of North Carolina and what you see is what you gonna get. I reckon y'all know me by now - the only reason I'm not down there is I can't find me no steps. I hope you're going to let go and let God tonight."

The venue is Birmingham, England and Shirley Caesar is doing what she does best - delivering the raw, no-nonsense gospel sound that has brought her from singing churches as a raggedy eight-year-old in Durham, North Carolina to her current status as international gospel superstar, City Councillor, graduate and head of Shirley Caesar Outreach Ministries Inc. Not for nothing has she been dubbed First Lady of Gospel Music - but however far she's come, Shirley Caesar is still firmly rooted back into those North Carolina hills, Durham City, the family she sprang from and the source-springs of traditional black gospel.

"I come from a gospel background - my father, Big Jim Caesar, was a great gospel singer. All of his sisters and brothers were gospel singers, preachers or missionaries. I started singing when I was eight years old, one year after my father passed. I don't remember him that much, but sometimes the older people will tell me, "Oh, if you could have heard your dad, you're the spitting image of him with your singing ministry."

One of 13 Children, fatherless and with a partially disabled mother, Caesar knew her share of hardship as a child. However she remains intensely loyal to her family and especially to the mother who brought her up and remained an important influence on her life up until her death in March 1990. Shirley's musical genes manifested themselves early on.

"I got my start when my mother's next door neighbour Miss Jones carried me to a church to sing. I think one of the ways we discovered we could sing was we really hated to do any work in the house, we wanted to play - so Mama gave us all a whipping and she really had no problem after that...I would was hand Anne would dry and we would sing. The window was up and the people in the neighbourhood could hear us and people started to invite us to their churches to sing. That's how we started."

Anne, who travels with Shirley today, went on to become a member of The Caesar Singers, along with Shirley, two other sisters and a cousin. This group has been cited as Shirley Caesar's first professional outfit, but during our conversation she delved further back into the archives. "Prior to singing with them I was part of a group called Thelma Bumpess and the Royalettes - she was a blind singer." Bumpess, who today remains a shadowy figure on the sidelines of gospel's golden age, also recorded under the name Blind Mary. As Blind Mary and Baby Shirley they recorded a couple of sides together on Federal in October of 1951 which included what must be Caesar's first recorded rendition of the song that went on to become her trademark with the Caravans - "Sweeping Through the City". She would have been around ten years old at the time.

Throughout her teenage years, weekends as often as not would be spent travelling by bus, usually with a brother or aunt for company, singing gospel, notably with a one-legged singer named Leroy Johnson. Already "Baby Shirley" had a small but loyal local following and obliging teachers used to slip her out of school early so that she could make her engagements on time. She earned her stage name "cos I was little and short and I had such a big voice...they called me The Little Girl with the Big Voice, or Baby Shirley."

North Carolina in the 50s was very much on the gospel touring circuit. The great male voice quartets would visit and Caesar grew up listening to the records of all the seminal performers, including the group formed by Albertina Walker in 1952, The Caravans. From their beginnings as Robert Anderson's backing singers, The Caravans went on to become gospel's all time female super-group and acted as launching-pad for more stellar careers in gospel than any outfit before or since. In 1958 they came to Shirley's neighbourhood, and she was determined to seize her chance.

"They came to North Carolina to sing and they were travelling with a package - The Soul Stirrers and I think the Swanee Quintet was with them. I know the Nightingales was part of that package, and also Dorothy Love Coates and The Original Gospel Harmonettes. Their first concert was in Raleigh that afternoon and they were going to go on to Kingston, North Carolina. I was out of school for the summer (North Carolina State College Of Education, where she was majoring in Business Education) and I had no money to go back. They only had three singers then, Albertina Walker, Inez Andrews and Sarah McKissick. I told Dorothy Love Coates, who was also an inspiration to me, 'tell that lady I can sing.' I've always been very persistent! I don't know whether she did or not - anyway I followed them to Kingston that night. I can't remember how I got there, I know I didn't have any money, I don't even know how I got in the concert, all I know is I was determined - and determination is the strongest nation in the world." (A quarter of a century of preaching has left Caesar's speech well seasoned with proverbs.)

"When I got in I wrote my own request - 'Please call Shirley Caesar to sing a solo.' I felt that if Albertina walker heard me sing, she'd want me. I don't know why I felt that way, I just felt it was the Lord's will for me to make that move. The Lord knew I didn't have the money to go back to school - he also knew that my desire was to continue to care for my mother. Every dime I made I brought home to my mother, regardless how hungry I was - because I wanted to be a blessing to her.

"They called on me to sing that night, and I remember singing one of Thomas A. Dorsey's songs, The Lord Will Make A Way Somehow/ 'Like a ship that's tossed and driven battled by the angry seas/when the storms of life are raging and their fury falls on me/I wonder what I've done that makes this life so hard to run/but I said to myself, don't worry - the Lord will make a way somehow.'

"When I finished singing that song Albertina Walker started whispering around 'who's that little girl, I want that little girl.' After the service she talked to me and said 'can you travel and sing?' I said 'I don't know, you'd better ask my mother'. Later on that week reverend C.L.Franklin, the father of Aretha Franklin, called up and spoke to my mother. I sold my biology text book that afternoon and bought a bus ticket and rode from Durham, North Carolina to Washington D.C. I'd never even looked inside of a hotel, let alone stayed in one, but I remember I stayed in the Casbah Hotel. On Friday The Caravans came into town; they rehearsed me at 2.15 Friday afternoon and Friday night they put me on stage! That's how I joined the Caravans."

When The Caravans arrived they were a member short - one of Inez Andrews' relatives had died and she had gone home, leaving the lead vocal slot on several songs vacant.
"Here I am, a brand new kid off the block - they asked me 'can you sing any of these?' I said 'I can sing all of them!' As a child I'd listened to all their records. When I said that they all looked at each other, but I said 'What do I care, I can sing them all - Which one you want me to sing?'

By the time she returned, Andrew - who was famed for her statuesque stage presence and a performing style that never involved moving from the mike - found that some of the group's material had changed irrevocably.
"'Running For Jesus' was a highlight song they were doing and when Inez got back the song had been moving around the country so fast because when I would sing I would skip and shout and I would run wit hit. So what happened was Albertina said 'Inez, I really think you should let Shirley help you sing this.' So when she turned it loose I grabbed it and it was powerful!"

Pastor Shirley Caesar surpasses the term icon in gospel. I label her a"super legend". I would rather hear her perform than have a T-bone steak which I love. I met her in person in the early 70's. She is still as anointed and talented as she was decades ago when she sang such tight harmony praises as"He heard my cry, Have you got good religion?, and "I believe". I recently ran into her at the London Heathrow Airport. It was so exciting since I played her on my iPod a lot coming from New York. I pray that God continues to keep her looking great and feeling great as she ministers to the world at large.

I love Shirley Ceasar. Has Ms.Ceasar ever done a benifit concert towards any charities. If so would she able to do one for the Little Willie Center.OrgH

I found this article very informative an it also mentioned my aunt Thelma Bumpess. I've always heard family stories that she sang with ms. Ceasar but now I know that its true.