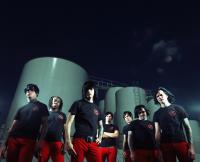 Showbread are a hard music band from Georgia whose first album 'No Sir, Nihilism Is Not Practical' (out in the UK's mainstream through Golf Records and in Christian retail through EMI CMG) are believers who aren't afraid of the stigma of the "Christian" label. The band's guitarist Matt Davis told Metal Hammer magazine, "Basically we're a band who love our fans and love doing this and it's because we love Jesus Christ. That offends a lot of people out there and that's okay by us. We're cool with whatever people want to believe or not believe out there. We don't want it to offend anyone, it's just what we're about and it's what we stick by no matter what effect it has on our band. It's not to sell any extra records or anything like that but we feel it's only fair that people know what they're getting themselves into when they start listening to our band."

Showbread were equally unequivocal about their faith when talking to Kerang. David told them, "When the band started, it was like an acoustic praise and worship band. We started playing harder music and the church frowned on it. They were saying it was evil music. That's why we called ourselves Showbread - it's a biblical reference that Jesus used to show how Christianity isn't so much about rules but about love. It was our way to make a point back."

As well as Matt Davis, Showbread consists of singers Ivory Mobley and Josh Dies, guitarist Mike Jensen, bassist Patrick Porter, drummer Marvin Reilly and "keytarist" John Giddens. Cross Rhythms broadcaster Greg Sammons spoke to the band on his Rock And Hard Place programme where he asked Matt Davis whether he was worried that the "Christian" tag was going to hold back the band's progress in the mainstream. "Kids are becoming more accepting. But you know regardless that "Christian" is still the label that follows you and that's fine with us. We know that God's going to open the doors that he wants to open up and keep the ones closed that he's not. So it's exciting to get in. We just had a big write up in Revolver which is a big magazine over here so it's cool that we are getting secular press. And if God uses that to plant seeds and stuff that's fine with us."

Although dubbed hardcore by a subdivision-obsessed hard music media, there's much more to the sound of 'No Sir, Nihilism Is Not Practical' than that. As Davis explains, "We describe our music as raw rock. It's basically high energy rock and roll with an element of whatever the heck we feel like putting in there at that particular time: be that funk elements or calm moments or whatever makes the song sound better. We're trying to bring a freshness to the scene that just isn't around right now by trying to do whatever feels right. We aren't hardcore, we're not punk, we're not rock, we're just real raw rock. We're just bringing a lot of energy and a lot of fun to the plate. Bands try to be too this or too that right now and have all the same attributes as the next band. There's too much fashion and too many pointless breakdowns just for the sake of doing them around, and it starts to tick you off a little. Just write what you feel like and have fun with your music instead of just jerking around and trying to fit in with whatever is hot right now. That's why so many bands are here one minute and gone the next, through just trying to be trendy all the time." 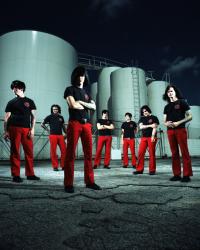 Apart from their music, another things which singles out the group from most hard music teams is their black and red uniforms. Comments Matt, "It's kind of what we're doing right now. I don't know how it is over there but in the States some kids are so into the hardcore thing and hardcore fashion and everything and we are the kind of people who kind of see through that. But also we're like a small army travelling around, so we just kind of wear the same stuff. We thought of one thing that would look cool and then we just kind of ran with it."

Currently Showbread record for a small label (Tooth & Nail). What would happen if the band were offered a chance to go with a major? Responds Matt, "If God opens doors for Warner Brothers or whatever then I guess we'll kind of pray about it and find out when the time comes. For now though we're really happy with Tooth & Nail. They are great to us and you know we want to do whatever God wants us to do and if that entails bigtime mainstream success then we'll do it. We know God won't give us anything we can't handle. If we are just supposed to go round and play churches for the rest of our lives then we'll do that too. We're just here to rock out and serve God."

email is for my daughter Heather she is 17. she is on third semster at local coll. she is ahead of other kids her age. she is beautiful and loves the lord and is sweet. but she has trashy boyfriend that mooches off her. this terrifies me. She thinks she can't do any better. pray for her. email her. love your music!!!
I saw you at life light. loved you guys!!!

oh my goodness! when you boys come to huntsville it gets better and better. my life is complete now that i've listened to, seen, hugged, and taken pictures with y'all. seriously, showbread is my life. i love you all so much!

For more on Showbread visit the Showbread artist profile