Sidewalk Prophets: Reflecting on The Things That Got Us Here 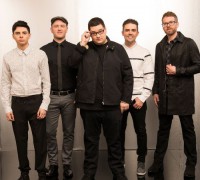 When Cross Rhythms last wrote about the Nashville-based pop-rock hitmakers Sidewalk Prophets, they had recently been awarded the New Artist Of The Year award at the Doves. On 22nd May this year they will be releasing the album 'The Things That Got Us Here'. They actually began recording the project two years ago and took a lot of time together in the studio demoing songs, experimenting with different sounds and incorporating unusual instruments. They intentionally attempted to capture a sound that was both authentic and organic. Taking its name from a line in a new song titled "Real To Me", the album as a whole tackles universal topics like identity, forgiveness, doubt, worry, comparison, mental health and finding joy in the mundane. Like three-minute love letters to their fans - the Great Big Family - the project's 13 tracks radiate hope in the midst of life's peaks and valleys. The band is simply speaking from experience - bringing their most authentic selves to a project that encapsulates all the dots on the map that have connected them to this moment in time.

Said the band's frontman Dave Frey, "You think of all those things that fell apart in life, all the days you had doubts and fears, and the many miles you travelled to get where you think you're supposed to be going; and you realise that all of that stuff - the good, the bad and the ugly - has brought you to where you are today. It's really the things that got the band to this point. It's the things that got our fans to this point right now. When they come to a show that we centre round this new album, we hope they realise all the stories in their life have brought them to that very moment and that very night."

The band's 2010 Dove Award as New Artist Of The Year demonstrated that award's elasticity with the word "new". The band were actually formed by Frey and guitarist Ben McDonald in 2002, and by the following year had been signed to Word Records. Their early albums, 'Sidewalk Prophets' and 'These Simple Truths', were followed in 2012 by the breakthrough album 'Live Like That'. They had further success in 2013 with the seasonal 'Merry Christmas To You' and the 2015 set 'Something Different'.

2020 is going to be an extremely busy year for Sidewalk Prophets. On 22nd March they will be offering to their fans a free concert to be held at the historic Ryman Auditorium in Nashville. This will, in fact, be the first ever free public concert at the iconic venue. After that, the band will undertake the Smile Tour, "Smile" being the radio single from 'The Things That Got Us Here'.