Sivion: The Dallas-based emcee speaks about the changing face of Christian rap 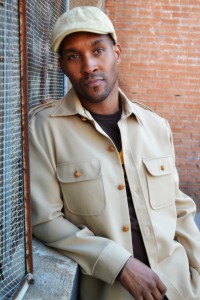 The Dallas-based rapper Sivion is currently getting Cross Rhythms airplay for his 'Group Therapy' album. Speaking about the album prior to its release Sivion said, "The reason why I have the name 'Group Therapy' is because it's basically a guest album, there are going to be a lot of people on this thing. There are going to be at least 30 people on the record. It's kind of amazing I was able to co-ordinate and get that many people interested in my project which is a blessing because God has had me travel all over and I have a met a lot of people and I have a whole bunch of homies and that's amazing. It has Deepspace5 on it, obviously that's my own crew and family, it also has Tunnelrats. I have never really done anything with Tunnelrats so I have got Jurny Big - I mean I have got a lot of Tunnelrats on this thing so it is pretty exciting. I got Sareem Poems from LA Symphony, Manchild from Mars Ill, Sintax The Terrific, Propaganda, I have a ton of people on this record and they're all just bringing top notch rap flows. Usually when you have this many rappers on a record, somebody is going to come away with some throwaway verse. Everybody brought it, and I was like, wow, I'm honoured."

Sivion grew up in Maryland but has lived most of his life in the Dallas area. He told rapreviews.com, "My mom's entire family is from Texas and my dad's side of the family is from Baltimore, Maryland. I went to the University of Miami. During my freshman year I started writing some raps. I have a twin brother and he was at the University of North Texas, which was a little closer to home, and he started writing raps, too, and hooked up with a deejay, so we formed our little group, Phat Kats. I ended up going solo in early 2000 when my brother ended up not being able to dig into hip-hop much anymore because of his job and family and stuff like that. As far as my faith, I grew up in the church just like anybody else can probably say. Saved at a young age, but you know it's kinda hard for a child to make that decision for themselves. I think it made me pretty much a good kid all the way up until college and then when I got to college, you know. University of Miami is pretty much known as a party school, but even there I was pretty good, but some things happened in college that made me reaffirm my faith and make the decision to do better and I've been on that fervour ever since."

While Sivion was at the University of Miami he was approached by a religious group which turned out to be seriously bad news. He explained, "It wasn't a cult in what you think of textbook definition of a cult, but this particular group was a really zealous one that if you weren't baptized in their group or part of their group it didn't matter what you believed, you weren't going to Heaven. I went to a couple Bible studies and they had me in tears thinking I didn't know nothin'. I called my mom and dad, my dad is a minister and he's kinda like me, he's not real traditional, he loves God and sometimes he loves God and hates church because of all the traditional things that go on in some churches that really don't have anything to do with God's word or having a relationship with God. So we talked and he was just like if you don't feel love in this then God's not there. That was like all it took, I was like you're right, they're not approaching me in love, this is some crazy condemnation stuff. Of course I ended up getting out of that; they tried stalking me and all that other stuff that cults like to do. But it reaffirmed my faith. It was a learning experience for me because it opened my eyes to some of the crazy things that people do. I feel bad for all of the kids that got sucked up into that thing because they were preying on freshmen hard."

By the mid-2000s Sivion was writing and performing raps. CDs like 'Mood Enhancement' (2006) and 'Butterfly Sessions' (2010) and numerous remixes plus Sivion's occasional work with the loose collective Deepspace5 have kept him in the public eye. Earlier this year he spoke to the underground website about the changes in Christian hip-hop he has seen down the years. "When I first got into Christian hip-hop the underground sound was much more prevalent, especially with groups like Cross Movement and Grits making big moves at the time. But the problem back then was that there were only a handful of acts that had enough legitimate skill and talent to compete with secular artists. And I think that's part of why the secular kids kind of clowned the Christian game a bit. There also was a bunch of comparisons that made no sense to me. It was like every label had to make comparisons in hopes that new Christians would buy their CDs (ie, if you're a fan of this secular rapper, then you'll like this Christian rapper because they sound the same). And honestly, I know there was pressure from some labels to try to emulate some of the secular sounds, but it all just came off as a very weak alternative or just low quality copy-cat music. But nowadays, it's the opposite. I really think the Christian side is bringing much more passion and talent than the secular side. We're still a ways off from getting the true respect that the genre deserves, but with artists like Lecrae getting Grammys, I think we're getting there slowly but surely."