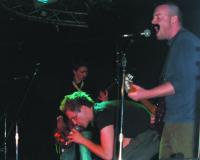 Stourbridge's Rock Cafe is a rock venue of the old school. This grungy club on a Black Country industrial estate is functional, tatty and reeks of tobacco smoke even when there's nobody lighting up. It also sports a fearsome PA loud enough to rattle teeth and ensure that, on a regular week, bands with names like By Jovi and Race Against The Machine keep the undemanding locals happy. But on a Sunday in May the Rock Cafe put on an event of a somewhat different hue. 10 Christian bands from as far afield as Glasgow and London gathered there to inaugurate Skankfest, an event put together by Adam Zebra of Yorkshire punk band Zedisforzebra with considerable help from deejay and moderator of the Skankweb alternative music website Marc Lungley. The purpose of Skankfest was simple - to give a bit of financial support to Cross Rhythms. Said Adam, "There are hundreds of grassroots Christian musicians who Cross Rhythms have helped down the years. This is our effort to give a big thank you to Cross Rhythms."

It proved to be a hugely enjoyable, and very loud, thank you. From the moment that Gopherwood, a fiery threesome from the Glasgow club scene, took the stage it was clear that Britain's Christian hard music underground is producing exceptionally passionate music. Gopherwood's frontman Mikey Clayton snarled his infectious, polyrhythmic punk rock songs with grit and fire and drew numerous nods of approval from the audience liberally peppered with other band members. To shoehorn 10 bands onto the bill every act had a 30 minute set (with 15 minutes for changeover). So at 3.45pm band number two took the stage. They turned out to be a real treat. V12, having recently relocated from the West Country to London, have been picking up plaudits from publications as diverse as NME and Euphoria. Their hard-to-pigeon-hole sound is loud but deftly textured. Also V12's lead singer Daniel Wilcock has one of the most distinctive voices heard for years, while his charismatic stage presence means you follow him all over the stage. Couple that to some savage guitar sounds and you have a breathtaking set.

If V12 are rock subtlety, the next band's declaration that "We're Jonah from Chesterfield" suggested a blunter approach. But for all Jonah's raw riffing, impressively every word could be heard. "I was born to praise your name," their singer growled and though the sizeable crowd didn't exactly break into worship, everyone got the point. It was now sauna hot in the Cafe and by the time the next band, Zyllah, took the stage I was outside in the forecourt risking the produce of the gathering rain clouds. When the cacophonous sound of Zyllah drew me back in I found a full scale mosh in progress. Having largely passed the age of testosterone-fuelled body slamming, I settled for marvelling at the amazing tightness of Zyllah's drummer. After the mosh mayhem a decided change of pace (and volume) occurred when Sibling came on. Long time supporters of Cross Rhythms, this Nottingham band purvey a gentler form of rock with nicely crafted songs demonstrating REM and Coldplay influences. The crowd response was polite rather than rapturous but this underrated group impressed me. At 6.45 Cain's Mark began their set. Like Zyllah, the band hail from Enfield but their sound could hardly be more different. In fact, the band offered a subtle blend of shifting musical textures, clever tempo changes and a keening vocalist whose sense of the dramatic made for an intriguing stage act. By the time they closed their set with a punk style "Where's Your Smile" I'd already scribbled a note that this was a band to watch out for in the future.

After a snatched pizza at Dominoes adjoining the Rock Cafe, I was back in time to hear Zedisforzebra. Here was a band with enough energy to run a city power grid with Adam throwing himself around the stage in joyful abandon and the band pounding out infectious pop punk rhythms. Clearly from the slogans I read on t-shirts, the band had brought supporters with them and by the set's close you could see the streaks of sweat on the dance floor. DJ Marc Lungley then did a half hour set for those whose ears could take it and his blend of hardcore and nu metal pounded out in the semi darkness. When at 8.30 the live bands resumed it was Unwritten's turn to take the stage. These London veterans are eclectic in the extreme, one moment coming on nu metal, the next punk, the next decidedly old school rock but leader of the trio Loz is an engaging personality and by the end the crowd had warmed to them. 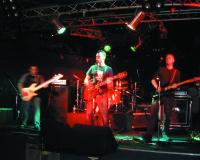 Flik were next up and I was immediately taken with the earthy passion and God directed vision of the band's lead singer Steve Williams. Their songs were intense and spiritually pointed and when Steve engaged in a mini preach it seemed entirely appropriate. Immediately after the set two young ladies came to the Cross Rhythms stand to enquire the name of the band and whether they had any CDs out. Clearly I wasn't alone in being affected by the band's incisive presentation. There was still a major highlight to come. At 10pm Gen took the stage. Although I knew of the band's onstage reputation and had recently received an advance copy of the Midlands nu metal group's debut album 'Rite Of Refusal' I wasn't quite prepared for the sheer intensity of the band. From growling raps to melodic hard rock anthems the band has an amazing repertoire of sounds while lead singer Jonathan Griffiths had a stunning ability to sing with gritty eloquence and then, in the blinking of an eye, switch to a blood curdling scream. The song "You've Been Caught" with its chilling images of being left behind when the Rapture comes was nothing short of breathtaking.

At the close as I (rather ineptly) helped my colleague Mark Goodge to pack up the Cross Rhythms stand there was still two more blessings to come. First, Adam Zebra passed me a wad of money - the total after the venue had been paid coming to well over Â£500. The second blessing was a stream of musicians coming up to shake my hand and thank me for the Cross Rhythms ministry. It was a proud, if slightly deaf, editor who made the journey back to Stoke-on-Trent.

Nice one, Tony.....and thinking about it, a Skankfest for the terminally middle-aged would be interesting (Zimmerfest?) - we could have Bryn Haworth, Alwyn Wall / Norman Barratt, ATF and so on. Cozy but good!