SkyBlew: A rapper/anime artist prepared to turn down an Atlantic Records deal

Tony Cummings reports on a hip-hop artist whose visuals are as important as his music, SKYBLEW 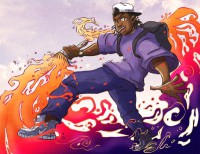 SkyBlew is an acclaimed rapper and anime artist who has managed to become more popular in South Korea than he is in the USA. He has shared a stage with Kendrick Lamar while his multi-coloured anime images are in themselves much admired. When rapzilla.com wrote about him in 2015 they headlined their story From Foster Child To One Of Christian Hip-Hop's Coolest Nerds. And indeed, his refreshing stance is a long, long way from a self-conscious, bling-obsessed rap icon while his ability to not take the critical accolades heaped upon him too seriously make the Alabama native, born Mario Farrow, one of the most engaging rappers on the whole hip-hop scene.

SkyBlew did not have an easy start in life. He was placed in foster care from about eight to 15 years old. He had many short-term homes because some foster parents would only take him in for the money. He suffered from a heart murmur and passing out due to anxiety. Eventually, his father took him out of foster care. He was turned off by his father's overly religious ways. However, he found relief and acceptance on weekend visits to his grandma's house with his cousins. He loved it there so much that he wanted to live in her house. He told Rapzilla, "She would take us to church, and it was different spiritually. It wasn't forceful."

The first signs of SkyBlew's lyrical ability came during poetry class and lunchtime freestyle sessions in his teens. However, the tough times weren't over. His grandmother passed away in 2005. He then moved to North Carolina with his dad, but it didn't work out so he lived with friends and, after that didn't work out, he became homeless for months. In high school, SkyBlew was adopted by parents Jackie and Logan Parrish, who love and support him. Today, he "paints the sky. . .blew," as his mantra states. He knows who he is and isn't afraid to be himself - even if that means referencing anime characters or shows like Yu Yu Hakusho about a spirit detective, which he says is also his alternate occupation.

SkyBlew told Rapzilla how he got into anime: "Growing up, I watched Toonami on Cartoon Network that got me into Dragon Ball Z, Sailor Moon, Yu Yu Hakusho, Ronin Warriors and PokÃ©mon. That definitely got me into it before I knew what anime was. As I got older I looked at it more and then I started going to the library checking out manga. I really became an anime fan from there. As I would do my music, I subtly would put little references to different anime. Then I was like, let me go further than that. Let me try to flip this whole concept of this movie to see if I can make this relate without you even knowing it was an anime. The anime fans get it. Anime has always been a part of me. I just love it."

SkyBlew was devastated when his grandma died. But her death propelled him into the epiphany that changed his life. He asked himself: "What would she want me to do? She would want me to make a difference in life and change how I am, spread love and focus on God."

In 2010 and 2011 the rapper released three mix tapes, 'Color My World', 'Write Blew On The Clouds 2 (ColorfulDreams)' and 'Clouds Are My Everlasting Memories'. They immediately began to attract critical attention, as did the album 'Above The Stars Is My Landing' in 2011, and two more mixtapes, 'The Blizzard Of NC' and 'The Extended Walk Home'.

The prolific rapper can get inspired at any moment. He's been described as stopping in mid-conversation for a few minutes to scribble down a concept, and sometimes even a whole flow-of-consciousness rap.

In 2012 and 2013 there were two more albums, 'Your Dreams Is BLEW Reality' and 'Window Seat On That Midnight Train'. Both found receptive ears. His projects often took decidedly unusual themes. For instance, the 2014 album 'UnModern Life' was inspired by the 1990's Nickelodeon show Hey Arnold! and featured songs titled "The Ballad Of Pigeon Man", "Sally's Comet" and "The Ballad Of Stoop Kid". The album artwork was also animated on an accompanying CD Rom.

In 2015 he released the album 'The Royal Blew Reverie'. Read a press release, "Dream Team, SkyBlew and Scottie Royal joined their forces again to create a work so extraordinary. Natural heat resounds from the very first note. SkyBlew adds his unique style to Scottie Royal's organic productions with incredible grace. Rich musical layer is the perfect backdrop for soft and melodic flow. Sky and Scottie take us to the land of their inspiration. Through references to classic animations, the album is a mirror and follow up to many imaginations. In every second, SkyBlew proves to us how underrated an artist he is. Puns, elaborate metaphors - neatly presented and served with professionalism. Sky surprises and moves us and always keeps painting the Sky - Blew!"

Asked to describe his music SkyBlew told Rapzilla, "I don't rap, I paint the sky. . .blew. It's more of a visual. When people hear my song they say they visualize it, like I painted a picture for them. That's what I'm trying to do with my music. It's like poetry in motion. It's hard for you to put it in a box. Like people say, 'Oh, it's positive, it's Christian, it's nerdy, it's conscious.' I don't just do one thing. It's a variety of sounds, a variety of styles."

Albums like 'Jazz For Autumn Kizmet' and 'Race For Your Life, SkyBlew' followed before, in 2016, he released what many, SkyBlew included, consider his best work, the EP 'Destined: The Rebirth'. He told Impose Magazine, "I would have to say it was inspired by my metaphorical 'Rebirth'. I took a five-month hiatus from music at the end of 2015 after I wanted to quit music and life in general. I took some time away to re-evaluate things, to see if I really wanted to do this and if it was my calling. I knew I was really good at it and it's a dream of mine, but sometimes things don't go according to our plans, so I was questioning that. During that time, I received IMMENSE amounts of support from my TRUE supporters, friends and family. My family and supporters were sending me page long emails explaining to me why my music is important to them and what impact it had on their lives. It was truly inspiring. I knew I made music to inspire but sometimes you need a little assurance that it's actually doing what you imagined it would. Far as my TRUE friends, family and loved ones, they were just in my corner every step of the way. Over time I realised what I knew the whole time which is, I'm destined to do this. This is my calling. . . This EP was a sample of the results from that period and what I got from it."

SkyBlew continued to pour out releases. He told Rapzilla although he'd received offers from two record labels, including Atlantic Records, he'd turned them down. He said, "Especially when I started studying the music industry and seeing how miserable these artists are and the whole selling your soul type of thing, I ain't tryna do that." Instead, albums like 2016's 'SkyBlew The Cowardly Boy' and 2018's 'Painting 'Til She Dials' trod the defiantly independent path. The latter album received an enthusiastic review on the hip-hop website Scratched Vinyl. It read, "The short explanation that SkyBlew provided for this album is, 'I painted this dreamy soundscape during the time I was on standby, awaiting a call. . . "Clear your mind, press play and embark on a journey; through a variety of colours, space and sounds. . .."' This might seem fairly abstract at first, but it will make more and more sense as the album plays out. For this project, SkyBlew enlists production from Scottie Royal, Mag.Lo, Oh Genius, SublimeCloud, Truck Willis and Sleeping Awake. The overall sound coming from these producers is slightly different than previous efforts from SkyBlew. SkyBlew's wheelhouse is what he calls 'jazz hop', a smoother style of production drawing on jazz samples. This time out the production is drawing more on funk and R&B from the late '70s and early '80s, giving the album a fatter, funkier feel." His latest release, a collaboration with R&B artist Less Is More, is the single "Friendly Skies".

SkyBlew's slogan is "I don't rap, I paint the sky. . . blew". Impose Magazine asked the rapper-cum-anime-artist how his music lives up to his slogan. He responded, "When I came up with that slogan, it was based off the response I was getting from my music early on. People would tell me that my music takes them to another place and they can visualise my stories. From there, I came up with the concept of not 'rapping' but actually doing something bigger and that's creating beautiful pictures for the world, something people can not only visualize, but FEEL deep within their souls. . . We're living in some crazy times right now and it's only getting worse, so people need to sometimes just hear somebody say 'it's gonna be alright'. . . When those skies turn grey, I want people to play my music and it brings back the blue skies. Metaphorically and literally. 'Painting The Sky,Blew' is something you can get lost in when you want to escape the problems of the world. You can drift off into the soundscapes and let all the worries go."