Sleeping Giant: A metalcore band moving in healings and miracles 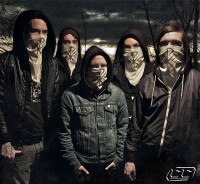 Of all the hundreds of hard music bands featuring Christians on the US scene, few are as committed to Holy Spirit ministry as Sleeping Giant. Since forming five years ago in Redlands, California, this metalcore band have seen a steady rise in popularity with their latest album 'Kingdom Days In An Evil Age' on the newly formed Ain't No Grave Records being hailed by many as their best yet. The quintet have undertaken numerous tours across the US and their mosh pit pleasing live shows feature powerful elements of worship and prayer, a trait that some have claimed to be more intense than a church service.

When asked by kingdomextrememag.com about their outspoken faith, lead singer Thom Green responded, "If we are saying that God is raising up a generation of people we need to give them a soundtrack and an environment that is conducive for the Holy Spirit to move and impact hearts. That does not happen by standing there. It's like going to church and seeing the praise and worship band, which is your time to worship. So for us, I want kids going home knowing that they got the choice to enter in."

The band speak openly of fans being healed while attending their shows. Green said, "Our bass player Ryan has a healing anointing and at one show he prayed for a guy on crutches for a while and he said he felt a little bit better. Ryan kept praying for him and after a while he didn't need the crutches anymore. The things that happen often at church happen often at shows. People will come to our shows feeling sick. There was one account where Ryan prayed for our friend's arm. It was mangled and jacked up, and he could not move it very well. By the end of the night he was felling fine and could move it."

Thom Green told indievisonmusic.com about another miraculous healing in 2008: "This kid from Portland came down to Facedown Fest. This kid had broken his wrist and walked out to the front of the show and the EMT told him that it was broke and he needed to go to the hospital. Three or four people from our church walked up to him and said, 'Hey can we pray with you?' He was an atheist and didn't believe in God at all. He was like 'Whatever, dudes.' They laid their hands on him and he said it hurt real bad for a second and then all of a sudden it was healed. I got it on video - he went over to the EMT's and it was healed."

Healings and powerful times of prayer are, of course, only one aspect of Sleeping Giant. First and foremost, they are a metalcore band whose sound has, on some tracks at least, reminded reviewers of Rage Against The Machine, Hatebreed and Crowbar. All members - Thom Green (vocals), Eric Gregson (guitar), Geoff Brouillette (guitar), J R Bermuda (bass) and Matt Weir (drums) - were, at different times, members of xDEATHSTARx, a Californian metalcore band who released the albums 'The Triumph' (2004) and 'We Are The Threat' (2007). Sleeping Giant's first album 'Dread Champions Of The Last Days' was released in 2007, shortly after the band had signed a two-album record deal with Facedown Records.

In 2009, Sleeping Giant released 'Sons Of Thunder', the band's final album on Facedown. The band decided to experiment with their hardcore sound. In an interview with metalunderground.com, Green said, "With 'Sons Of Thunder' we tried to create some sounds that would stretch us. That was out of the box a little bit." The experimentation with their sound resulted in a piano-driven track titled "He Will Reign" which, according to Green, has "halted the spirit of suicide" within some people. Green said of the track, "It's more of a piano kind of song, and I've got a number of testimonies about that song halting a spirit of suicide. People are ready to kill themselves, and then for some reason they've heard that song or something happened and then they did not."

After Facedown, Sleeping Giant signed with newly formed record label ANGR, a record company who had taken their name from the first few initials of the gospel hymn "Ain't No Grave Gonna Hold My Body Down" written by Brother Claude Ely and in more recent times popularized by the late Johnny Cash. Bassist J R Bermuda released a statement on the label's website regarding the signing which read: "We are very excited to be working with Ain't No Grave Recordings. For the type of thing we are trying to do, to be more of a ministry than a band, to release a sound that not many people are doing yet, ANGR was the clear choice."

On 'Kingdom Days In An Evil Age' the band again wanted to expand their musical horizons. Said Green, "I feel like we've really kind of been looking for a sound that would bridge a gap in praise that most people haven't heard before. We want sound and space for kids in the front to jump and freak out, and a space for the older generation to say, 'I've never heard that before, I've never been able to worship like that before'." Although the band wanted to connect with older audiences, they had no intention of abandoning their heavy sound. "I think this record's a good blend of the heavy stuff that we do which we're not going to abandon, because it's super fun and awesome. It's what heavy music is about, but we're learning to crystallize that element of praise - how to create songs that are intimate and driving, not just sissy," said Green.

The band's goals since formation have been to glorify God and wake the "Sleeping Giant". The band's website reads: "We are called Sleeping Giant because Christians in the world today are just that in the world. And they need to wake up! They are sleeping giants of war in this world overrun by apathy, by people who do not see the enormity of their worth and don't realize they live their lives day by day forsaking love, and a just and amazing God who deserves it all".

But they aren't the only goals Sleeping Giant plan to meet. When asked what the band's mission was, Green quickly replied, "Miracles. I think that encompasses everything that we're about."

The opinions expressed in this article are not necessarily those held by Cross Rhythms. Any expressed views were accurate at the time of publishing but may or may not reflect the views of the individuals concerned at a later date.
About Luke Scrivens
Luke Scrivens is a teenager living in Stoke-on-Trent currently doing some volunteer work for Cross Rhythms.

I recently got into sleeping giant last yr. I use the music as worship music during intercession and worship. I love it. The fact that thereâs a band who SCREAMS truth into the microphone rocks my world. Been struggling lately with depression and the music tends to bring a peace. I love this band. Itâs powerful what they do!