Devon's SMALL TOWN MENTALITY have produced one of the best independent albums of the last year. Tony Cummings spoke to the band's frontman Jim Jones. 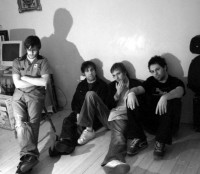 The entrance into the Cross Rhythms charts this week of the haunting pop rock song "Thank You" from the 'Monochrome' album by Small Town Mentality is yet another demonstration that some of the best music being released is done so without the help of a record company. I located Jim Jones, lead singer and composer of Devon-based Small Town Mentality and threw him some questions.

Can you give me a biography of Small Town Mentality, taking in the Carbon 14/C14 days?

It's funny, Small Town Mentality wasn't ever meant to be a band as such, more like a music project. Ken Kerslake (drums), Al Kendall (bass), Doug Barker (lead guitar) and I had been playing together in C14 for about six or seven years before Doug left to pursue other things. After he left, it never really felt the same. We had played some quality gigs, supported some well known acts and got ourselves a bit of a reputation, even though we remained unsigned. We had a great time and I have no regrets but I felt it was time to move on. I was going through some pretty hefty personal stuff towards the end and everything was starting to feel like too much of a slog. I was getting the feeling that the big man was saying time to lay it down.

Not too long after the end of C14 in January 2004 I was keen to record some new songs I had been working on. I felt closer to these songs than anything I had written before and they were actually quite difficult to play at times because of the very personal and honest content. However, music has always been a great release for me. If it's worship music or any other form, music gives me a way to get out from the inside what I sometimes can't express in other ways.

So, I asked Ken and Al to rehearse them with me and I contacted a friend of mine, Peter Bruntnell, to see if he would be interested in helping produce the recording. He came to the rehearsal that night. Pete loved the songs and had some great ideas about how to record them. The rest, as they say, is history! We spent the next 12 months writing, recording and re-writing the album now known as 'Monochrome'.

I still think of Small Town Mentality as more of a project than a band. It was a great way to work on an album but the next one could be completely different again. I'm thinking about hiring a Scandinavian nose flute quartet!

You've always seemed to me to be a songwriter who writes songs a Christian and a non-Christian can relate to. What are your thoughts about artists who call themselves Christian music and Christians working in the mainstream?

I guess they are two very different things. A Christian artist writes songs with Christians in mind, maybe to encourage believers, or for worship, or even to evangelise. I think a Christian working in the mainstream is on a slightly different path. It's not really any different from Christians working in secular jobs; values and integrity are imperative but you don't use jargon and you don't go over the top about your beliefs at the risk of appearing scary, weird or losing your job. Personally, I try not to see things as secular or non-secular, Christian or non-Christian. I write songs about life, my experiences and anything else that inspires me. Hopefully Christians and non-Christians will relate to those experiences. There is no agenda or persuasion, just observations. I can only write from my own view point and I hope that honesty comes through. Maybe in some way that will touch people and people will find something real in it. Maybe.

Pick out three songs from 'Monochrome' and expound on what they are about and how you came to write them.

I really like lyrics that are slightly ambiguous and open to interpretation; I sometimes think the mystery of a song can be taken away by explaining its meaning. It might mean one thing to one and something totally different to another. I love that about any art, you can own it for yourself. However in answer to your question, I will try and do my best. I remember "Still" being one of those songs that seemed to write itself. I started with the words "thinking aloud" and the rest just poured out. It's about the difficult situation of me coming to terms with the end of my marriage, emotionally and spiritually, how I was supposed to face it, look forward and move on. It's kind of sad yet hopeful at the same time.

"Amnesiac" was inspired by the movie Eternal Sunshine Of The Spotless Mind. (A must see movie!) That's all I need to say. "Real Life", which is probably my favourite at the moment, is about the disillusionment that life can bring up. Trying to look past the distractions of modern society and questioning why we still feel a need for something more.

The production on 'Monochrome' is top rate and sounds up there with quality mainstream releases. Did you spend a fortune on the album?

The only money we spent on 'Monochrome' was on the reproduction costs of the CD and artwork. We recorded and mastered the album ourselves with the technical wizardry, know how, equipment and skills of our bass player Allan Kendall and with the discerning ear for sound and production of Peter Bruntnell. I think we pressed up a thousand copies and in the end with all the artwork, design and production the total cost was about Â£1700.

Would you say Small Town Mentality have been held back because of their geographic location?

Possibly. It's hard to say. We've played in and around London and our manager worked in major record labels giving us all kinds of great opportunities. I think when the timing is right and if it's meant to go up to that level something will happen. I don't feel personally that I have been held back, I feel like I am where I am meant to be.

What ambitions and plans do you have for the future?

I've just returned from touring around the country with Peter Bruntnell and his band. It was the first national back to back tour that I have done. My friend Dave Little accompanied me playing an acoustic support slot. I love the intensity that comes with playing a simplified acoustic set. Dave is a brilliant guitarist, pianist and lap steel player and was able to add a real colour to my songs. With that in mind I am fairly keen to write a new EP/album. This time it will probably be under my own name.