Chicago gospel superstar SMOKIE NORFUL has a desire to stay in touch with his roots, as Tony Cummings reports. 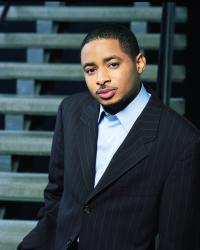 Smokie Norful has been called everything from "the voice of the new gospel generation" to "the Stevie Wonder of gospel." The seemingly meteoric rise of singer, songwriter and pianist Smokie Norful has taken a startled music industry by storm. A combination of huge talent and EMI Gospel's marketing savvy ensured that his debut album 'I Need You Now' became a huge hit (with sales around the 500,000 mark) and since then further hits have ensured that his brand of soulfully smooth gospel has registered with a mass audience. The 30 year old son of a Chicago-based preacher, Smokie was trained in classical piano and bred in gospel. By the time he was four he was playing piano and singing in church. His big break came when he was asked to sing on an album by Chicago's famed aggregation Rev Milton Brunson & The Thompson Community Choir. From there he caught the attention of Edwin Oliver, then director of urban music publishing for Walt Disney. Soon he was writing songs for such artists as Dottie Peoples, Marvin Sapp, Shirley Murdock and the Colorado Mass Choir. Norful explains, "My goal is to empower, uplift and encourage with my ministry and my music would be the lens through which they see God."

To those for whom the phrase "gospel singer" communicates a hoarse-voiced screamer of the Gospel, Smokie's sophisticated eclecticism will be a surprise. He says, "I've been exposed to a lot of different genres of music so I bring all of that to the table - traditional, contemporary, urban, worship and praise, ballads, up tempo - it's all there."

After such a huge initial hit, many wondered whether the follow up release could find large sales particularly as 'Smokie Norful - Limited Edition' released in October 2003 was very much a stop gap collector's item. Astonishingly though, the six-track EP (including a 2000 entry that Norful performed with the Thompson Community Singers and a Christmas track, "O Holy Night", recorded for TD Jakes' 'Follow The Star' set), plus an enhanced video of "I Need You Now" became another major gospel chart hit.

Norful insists he didn't have any jitters about trying to replicate his first success. "I don't try to follow up what God does," says Norful, who was Billboard's top gospel artist in 2003. "I just believe that it was God's doing because it fit no formula. I equate chasing after what we experienced on the first album like a dog chasing its tail and never catching it," he continues. "I went in with the attitude that the same God that spoke to me on the first CD, the same God that put a message for his people on the first CD, is the same God I'm calling upon and trusting to do this CD."

In 2004 Smokie released another huge selling album, 'Nothing Without You'. On it he again teamed up with producer Antonio Dixon. He also began working with such noted producers as Tommy Sims, Percy Bady, George Duke and Cedric and Victor Caldwell, as well as newcomer Josiah Bell for the first single from the album, "Can't Nobody Do Me Like Jesus". Norful calls Bell "one of the greatest producers that I think gospel and Christian music will ever see. He's 17 years old and a baby genius." The title cut is a song Norful wrote for his wedding. "I was supposed to sing it, but the musicians didn't learn it," says Norful. "I didn't want to leave [my wife] and go play it by myself and then come back. I regret to this day that I didn't have the opportunity to sing it to her at the wedding. But we did get it at the reception."

Norful may be a gospel superstar with three best selling recordings but he's very much in tune with the grassroots and is currently offering a series of workshops to educate aspiring artists on vocal technique, music ministry and the music business. "Every time someone meets me somewhere they have a CD they want to put into my hands, or they have questions," says Norful, who is self-managed. "I've been where they are and I've had those same questions. My whole mission in this ministry is to make sure that I am educating God's people so we can go higher. You can't go higher if everybody continues to make the same mistakes and falls in the same hole, but if we stand up on one another's shoulders, we will surely reach the goal that God has intended for us."

Many fans have sent Smokie letters indicating how deeply his songs have touched their lives. Smokie himself gives testimony to the reality contained in his simple devotional lyrics. He told CCM magazine about one such instance. "I've been married for five years and I have two miracle children, Tre and Ashton," Smokie says. "Tre and my wife are actually part of the reason I wrote 'I Need You Now'. My wife had gone in for a regular check up and they found tumours. This was the second time this happened and they said it didn't look good this time. They said it could be cancer and then they added, 'We don't think you're ever going to be able to have kids because of the location and nature of the surgery.' So right abut then, I literally lost it. My dad had just come out of open heart surgery a month or so before that and I was like, 'Wow, God I can't do this!' So I sat down at the piano and said, 'Okay, I need you now!' And that's where the words to the song came from. It was literally the cry of my heart, seeking God's presence, his touch, his rescue. Needless to say my dad's doing fine and my wife is healthy. It wasn't cancer, the doctors had to admit to themselves they're just practicing medicine. But the Master Physician has spoken. He said, 'I just needed to get this song out of this man.' And then one day my wife sent my miracle child number one into the room as I was typing my sermon. He came into the room with some paper in his hands and said, 'Daddy, Daddy, Daddy, Daddy, what is this?' And when he got close enough for me to realise what it was, it was the result of the pregnancy test that said - not only do you have miracle child number one, but here's another one that ya'll weren't even looking for!'"

Smokie norful has a beautiful voice I love to hear him sing even when he is playing the piano!!!!!!!!!!!!!!

i'm so glad to hear smokie's voice... i'm so blessed by the songs he wrote,,, i mean he is a true worshipper, not just a singer.. God bless u brother...

i can i study in this college. i'm a nigeria. i have passion.

Smokie I think you are a wonderful child of god. I just encourage you to continue your ministry and let god use you. God bless!!!

i really like your music. i wish i will be able to see you so soon.