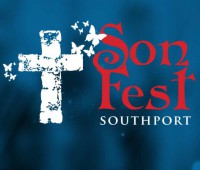 Singing in the rain? Gene Kelly once famously sung an ode to the joys of splashing around in the wet stuff. Years later, Morecombe and Wise put their own spin on such outrageous behaviour. The Beatles also recorded a paean to what in Spain falls mainly on the plain.

Coming from Southend originally, a hometown which year-on-year is the driest part of the country, I've still experienced the disappointment of a long-awaited day by the sea being ruined by bad weather. Equally British in character it seems, is the rain-soaked outdoor Christian event, another sodden phenomenon which most of us have had a damp introduction to, at some point. My mind goes back to the Greenbelt Festival in 2012, mud-farce caused by the worst weather in Cheltenham since records began.

Whilst not quite on a par, SonFest 2016 is a Christian music half-day event in Southport, now three years old. The change of venue from a town-centre position to the Kings' Gardens on The Promenade, near the pier, appeared to be the right one though neither site could have offered much protection from the onslaught of constant rain that begun 10 minutes before the advertised start.

It meant that opening act Rhyming With Orange, a Southport combo, had to contend with the elements and a crowd of around 50, variously sheltering with brollies or underneath small awnings. Rhyming are maybe not the most-talented or tuneful of rock-pop outfits, but their splendid endeavours probably summed up what this four-piece are about - a determination to honour God in music, despite (environmental) opposition. The 20 brave souls close to the stage rightly appreciated the Rhyming sound which reminded me of Joy Division and perhaps such low-fi, sonic expression would be suited to a place some 30 miles south-east from here: an alternative, basement venue in Manchester, delivering Christian lyrics to cool, detached students. Rhyming With Orange were an encouragement to us. Indeed, all the hardy musicians were. We had Rufus Garside, a suitably northern-sounding name, and the Phil Nankivell Band, who treated us to a sparkling version of "This Is Amazing Grace".

The rain continued falling and I felt heartbroken for the crest-fallen organisers. I gave a commiserating hug to Tina Powsey, whose vision SonFest originally was. She talked of how, at the age of 28 and living in America, she was invited to Calvary Chapel in Fort Lauderdale and how the music there spoke powerfully to her almost as soon as she walked in. As someone who "used to seek acceptance" and was desperate to fit in with the crowd, she had an experience akin to a "duvet of peace" tangibly wrapped around her by the Christian music.

Said Tina, "Christian artists don't just sing, they minister." Years later, on arriving in Britain, Tina looked to start "an event for those who wouldn't search for God's word." It was a vision motivated by the fact that, compared to the US, Christian music on radio and media is hard to find in many parts of Britain. 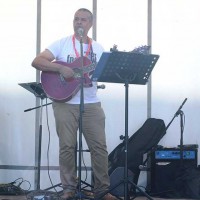 "I wish I could say that it was some divine notion that persuaded me," she said about SonFest, "but it was the desire to share Christian music. I was hired by Southport Methodist churches to do Fresh Expression, and they said I had Â£500 and please go and do an outreach event. I could do whatever I wanted. I realised then that I could go and engage people in Christian music because it has the power to introduce the Gospel in a really great way. It's an equaliser - it puts everyone on the same page. All the genres can come together and it was all about reaching people, both believers and non-believers. I wanted to do something which used God's word and live music."

By now, the weight of the rain had brought down the roof of the largest tent. On stage was Vernon Fuller, from St Helens. A jazz guitarist and vocalist, the warmth and joy of his performance and his own compositions shone through, clearly connecting to the point where the audience were dancing and clapping. With a delicious choice of Marvin Gaye and Bill Withers covers, combined with thought-provoking Christian witness, we sensed that here was a special artist.

After some five hours the weather began to slowly clear and brave dog-walkers were trudging past and obviously engaged first by Mike Weaver and Brian Beihi (of Big Daddy Weave) and, later, by Britain's most popular female Christian singer, Philippa Hannah. The artistry and faith of these performers was being heard loud-and-clear by an audience which had doubled by the end. 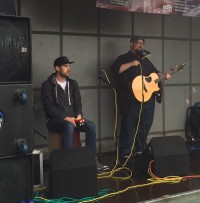 Mike Weaver stated that he was blessed just for being there and his powerful, soulful voice conveyed plenty of blessing to others. I felt for many of the audience who were soaked. But I realised the mistake of judging "success" by size or numbers. In God's economy, success is measured by the degree of obedience to him. In that respect, by simply being obedient to a sense of calling to stage a Christian music event, SonFest was a success - despite the weather.