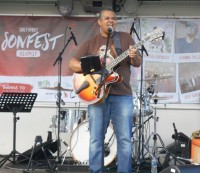 With the Christian music scene in the UK more than ever lacking opportunities to present its talents to the mainstream, music-listening public, sometimes you really do have to take it to the streets. . . or, in this case, the seafronts. On this occasion there was a lot riding on this free Christian music event: last year's SonFest was a wash-out and it was a real step of faith by the organisers to attempt it again in 2017. The year before had seen over five hours of continual, torrential rain severely hamper proceedings and something similar now would possibly spell the death-knell of the mini-festival which one Christian journalist present described to me as "a little gem."

Driving with my wife along the coast-road in the morning, with the sand dunes at Ainsdale on either side - some of which are 20 feet high - was a surreal feeling as the sun broke through the dry, cloudy skies as we entered Southport and realised that yes, we had an event. Parking up around a quarter of an hour before the advertised start, we noticed that there were already almost as many people present on-site as there had been during the whole of last year's rain-lashed activity. By now we were enjoying the warm weather of a bright, summer's day and, as I bumped into main organiser Tina Powsey, she exclaimed, "Last year, I was in tears over the weather - this year, it's tears of joy!"

Lakeside Church worship group were starting the proceedings on stage and this local ensemble were getting people into a worshipful mode with some well-known modern songs. As people began to raise their hands, it understandably felt as if it were as much in relief as in worship! The crowds continued to drift in and the sound of people genuinely praising God was now filling the air of this end of the Promenade, by the model railway.

Jazz guitarist and vocalist Vernon Fuller followed. As usual, he didn't disappoint, with excellent musicianship and vocals which, if not quite Al Green in quality, were certainly reminiscent of the soulful Reverend. A few of Vernon's own compositions were aired and the spiritual themes of the lyrics seemed rather like laments in nature - they seemed the natural counterpoint to the uplifting cover-versions of which Curtis Mayfield's "People Get Ready" was the standout.

Glasshouse worship band appeared to have an extremely young line-up and yet they sounded remarkably mature and competent. The male-female vocal harmonies helped to serve a sound which could easily have been like any mainstream worship act today, such as Hillsong. With a keyboardist just 13 years old, their overall potential was clear for all to hear. Phil Nankivell from Stoke-on-Trent came up and did a set as the crowd continued to grow. 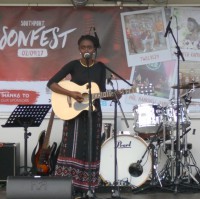 Scripture Union activities were helping to keep the young children quiet and occupied and Messy Church was also well-received. By now more and more were arriving from places like Chester, Liverpool and Burnley. Many others going past on foot, pushing buggies or walking their dogs, were stopping to hear the music and I got chatting to a handful of bikers from the Christian Motorcycle Association in Wigan. They had invited a number of biker friends to join them and not only did the friends eventually show up, but they ended-up staying for the whole event. Tina Powsey's dream of communicating through strong, good-quality Christian music was now being enacted on this glorious, Southport summer's day.

The slight, petite figure of Jennifer Kamikazi cut a distinctive image, walking alone through the crowds holding her guitar case. All in black, her outlook was as bright as the SonFest sunshine. Up on stage, looking fragile, she admitted that this was the first time that she'd played any sort of festival. If she was nervous, she held her nerve to deliver a stand-out set. Her vocals were light and charming, not so much like a strident Tracey Chapman, but more akin to Norah Jones and, inevitably, Joni Mitchell. There is no silly, self-indulgent Tori Amos-esque lyrical themes here, but rather, mature Christian concerns which reflect the reality of Christian living, emphasising the need for the Holy Spirit to work in our lives. All her own compositions, the stripped-back sound only reinforced the vulnerability she was bravely prepared to offer.

The Josh Walker Band seemed confident, assured and clearly interested the younger end of the crowd. Again, credible and heartfelt lyrics marked this act out as "Christian" and their sound suggested Bryan Adams circa 'Summer Od '69'. Walker himself exuded stage-presence while his band probably aren't much older than the Glasshouse church band, who deservedly followed for a second performance.

Manchester's urban pop specialists Twelve24 followed Glasshouse with a purpose. This dance/rap act, now apparently a duo, had the crowds on their feet, dancing and bouncing along. By then, several Muslim families had long since settled down and got into the music of the day and, impressed with Twelve24, a Muslim mother stood to film the start of their second set on her SmartPhone. However, one-half of the duo, Josh, stopped the songs after a while and began testifying about his conversion to Christ. Speaking explicitly about what Jesus had done for him in his life was perhaps too much for the Muslim lady, who promptly turned and motioned to her children to get ready to leave. Fair play to them, they shook their heads to show that they didn't want to leave, but she insisted. But by the time they walked from the front through the crowds and away from the area, Josh had fully testified to the hope within him, leaving nobody in any doubt.

By early afternoon, the attendance at SonFest Southport was three or four times (at least) the number of those who braved the rain-drenched event of the year before. Local police officers occasionally walked the circuit of the whole site, satisfied that this is a family-friendly, joyful activity. Therefore, the police helicopter flying overhead later on wasn't of great interest at first. That it kept encircling the venue overhead suggested that something serious had happened close-by. Eventually, the mainstage compere announced that a senior citizen with advanced dementia had escaped from a nearby nursing home and the police had asked everyone to look out for him. The compere then led the entire gathering in a prayer about the situation. A short while later the man was found, safe and well.