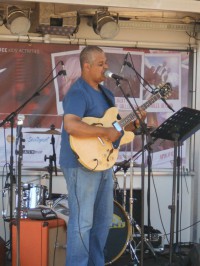 Now in its fifth year, SonFest moved to a more mid-season date, having previously been staged in early September. This time there seemed a different atmosphere and not just because of the change of month. A lot had been riding on last year's event, largely because 2016 had been a near-wash out with five hours of relentless rain. Another bad year in 2017 and it may have been curtains for this one-day open-air Christian music event. As it happened, the sun shone, the crowds flocked and it was a great success. Similar weather was forecast for 2018 and indeed, a heatwave duly arrived in sunny Southport.

The pressure was off, the crowds were roughly the same in size as in 2017 and everyone was able to relax and look forward with anticipation to the line-up. This, too, made a difference as a number of acts who had played the event in previous years were being rested and some new, unknown artists joined us - even some from America. So there was an air of expectation in the sea air as the worship group from Southport's own Lakeside church got proceedings underway. This line-up probably has an average age of 19, if not much more, but they were accomplished and confident, setting the tone with a set of contemporary worship songs which filled the length of the Promenade from the off.

One performer on the bill who has played at each of the previous SonFests is the jazz guitarist Vernon Fuller, whose whole approach to music, faith and life is as sunny as Southport was. Eschewing his own excellent compositions in favour of well-known soul classics, we were treated to some marvellous wah-wah guitar on his cover of Curtis Mayfield's "Move On Up". It was worth the admission fee for that alone. . . but then, this was a free event! Fuller's wonderful, soulful vocals were matched by a heart-felt Christian witness.

After that, the high standards were maintained by a couple of ensembles. Amplified used to be known as the Glasshouse Worship Group as they hail from the local church of the same name and boast an average age even younger than Lakeside's - but are no less talented. Liberty Worship Collective had a bit further to travel. From the other side of the Atlantic, from the biggest Christian university in America, in Lynchburg, Virginia, in fact. A Collective who audition around 1,200 students each year, its ranks comprise various singers and musicians schooled in both traditional and contemporary worship styles, as well as rap and hip-hop.

It was a real privilege to have such an esteemed line-up of acts joining us, both local and international. Acts like Voices Beyond, a contemporary gospel choir from Manchester who introduced us to some excellent interpretations, including a stonking version of Mary Mary's "Shackles (Praise You)". If I had one doubt about Voices Beyond, it was that the male vocalist seemed restrained in comparison with the three female soloists. This opinion was drastically-revised with the final song, Stevie Wonder's "Signed, Sealed, Delivered" when, from nowhere, this huge voice suddenly took Stevie's words and soared into the cloudless sky with them.

It was great to see a real range of ages represented amongst the audience - from children to OAPs. It was true to say that some of the teens had arrived primarily for the headliner - and had travelled some distance to see her. Philippa Hanna is probably the most popular Christian artist in Britain at the moment, and it's easy to see and hear why. Her warm manner, pop/country-crossover sound and her lyrical concerns, which are all about honesty and vulnerability, rather than victorious-Christian-living which, funnily enough, all of us struggle to achieve. The singer, songwriter and guitarist spoke to me after her second set. 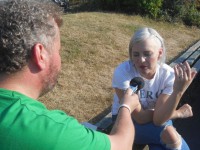 "I use my songs to tell my faith story; I use my songs to tell my everyday life story. A lot of people say I make myself vulnerable through my music. I don't feel very vulnerable, because telling the truth breaks down so many walls. So when I tell the truth about my struggles, people just flock to me, literally, and tell me about their struggles - and it actually strengthens me. It empowers, to talk about weakness, because it makes great things happen, it seems.

"Whether the audience is a Christian audience or not, honesty draws people nearer and helps them move forward in their journey. I've found that, over the years, when I go on tour with other artists - Leona Lewis, Little Mix, Anastasia, Lionel Richie - when I tell my story, of my mental-health struggles as a teenager, of depression, anxiety and things like that, people want to come and talk to me about these things. It's a great 'connecting method', if you appreciate honesty."

By now, Liberty Worship had already returned for a deserved second set. I had earlier been talking with Mike Foster, of Fill The Gap Concerts, who had been in the country for a week helping to set up SonFest. Mike was due to return to North Carolina the next day and was thrilled with the event, once again. Mike looks to address the missing 15-34 age-range in churches (hence Fill The Gap) and is committed to seeing SonFest building bridges to young people whose absence from our congregations is conspicuous. With the majority of the great talent on display at SonFest coming from that age-range, it gave him hope.

The proceedings were topped-off when Philippa invited all remaining musicians to join her on the stage, for another rendition of "Shackles". It was a memorable moment with black and white, male and female, all leading us in unfettered worship of God in the open, within the hearing of the tourists and holidaymakers along the Promenade. It was vindication. It gave rise to curious feelings of how this annual event can develop, can move with the times - as well as move the date!