This one-day Christian music event has now seen its sixth year. It was still a little cool and cloudy when we arrived on-site at the Kings' Gardens and, as we were running late, we missed most of the opening worship which started at 11 o'clock. However, judging from the booming volume that greeted us on arrival much of Southport hadn't.

The word is clearly getting out about SonFest, in Christian music circles, judging by the presence in the audience of Accrington-based John James Bruce, Peter Field of the punk act Peter118 and Mike Foster, from Fill The Gap concerts in the US. It was great to chat with these and others and there was a general consensus that this event is now firmly established and is giving a real taste of how good, and varied, Christian artists can be. In fact, we chatted so well in the increasing heat that we were ceasing to concentrate on the acts. Other events along the Promenade were causing a distraction to many, too. 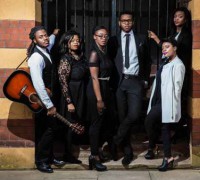 I was keen to view Voices Beyond. A late edition to last year's SonFest, this gospel collective were keenly anticipated this time. At first I wasn't sure if it was the same act. Augmented by a full band, the strong, rich sound was a little undermined, lyrically, in the opening song with the refrain, "I just wanna make him proud of me." This was a reference to their Lord. Pardon? Didn't Jesus state that pride is a sin? How can we ever do enough to make the Lord proud of us, were that possible? It seemed all rather glib and didn't bode well for the rest of their set. Thankfully, after that things took an upturn. Four out of the five song were originals and they were even confident enough to attempt an Emilie Sande cover. Hailing from Manchester, Voices Beyond are an accomplished band with some excellent vocalists and have in songwriter and vocalist Tosin Akindele a gifted leader. They just need to tighten up those lyrics.

The only act to perform at every SonFest so far is St Helen's-based Vernon Fuller and, as usual, he didn't disappoint. He'd already mentioned to me that he wasn't going to play any of his own excellent reflective, contemplative material. I needn't have worried, as he caught the mood of the large audience just right. We were treated to a sublime set of jazz, reggae and soul covers and the funky guitarist and singer perfectly connected with the laid-back nature of the crowd, whilst still getting them up and dancing. He finished with Marley's "Redemption Song" and a shiver went down my spine, despite the high temperatures.

The crowd numbers arriving were growing and, like 2018, it was a welcome sight to see a handful of Muslim women, in appropriate headwear, drifting in and getting into the music. They were clearly enjoying themselves, despite the obviously Christian nature of the general message coming from the stage. Their children, happily playing with the others in the family areas, were integrating easily.

Pyramid Park is, if you didn't know, singer/songwriter Pete McAllen though now it seems to have evolved into a three-piece band. Their set featured songs mostly from the 'Vulnerability' album which, to me, took in such influences as diverse as Radiohead, Chris Tomlin and house. For a three-piece they possessed a startling sound and, with a dash of Joy Division thrown in and with a bassist also adept at synthesiser-playing, it was all very impressive coming from guys who look so young. They weren't helped, however, by off-stage events distracting the SonFest audience.

There had already been one arrest on the Promenade nearby, when we began to be aware of police now cordoning-off a whole stretch of pavement, 100 yards from the stage, along with a thoroughfare leading to the beach. A brawl involving people who had nothing to do with SonFest had then led to an attempted murder and the knifeman being arrested. There were lots of ambulances, squad cars and flashing-lights. First Aiders from our event went to help. If nothing else, it shows that, far from being a self-indulgent "holy huddle," SonFest is right where it should be, a public Christian witness. 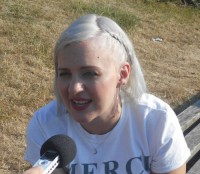 The fact that Phillipa Hanna was late in arriving was somewhat overlooked by the near 1,000 spectators. Having flown in from Ecuador and landing at 6.00am, the headliner and her percussionist had travelled straight from Heathrow to be there to play. She laughed about her guitar being more tired than she was, but both were immediately in sparkling form. With tourists, dog-walkers and other passers-by stopping and joining the throng, Philippa's talent and professionalism shone through like the now-scorching sun, with an Americana-tinged set which included some of her most well-known material, such as "Rag Doll". A lack of sleep for 24-hours wasn't apparent, as Philippa soon had everyone on their feet, dancing and cheering.

My wife and I had to leave around 5.30pm and so missed the final three hours or so of dedicated youth slots, featuring some hip-hop acts. SonFest is Christian music at its best - an event relevant to, and staged, right in the midst of the real world.