Song For All Nations: Estonia

Continuing our series on the international development of Christian music, Hubert Jakobs reports from Estonia. 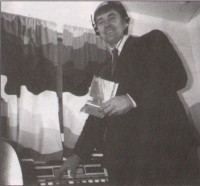 During World War II Estonia shared the same fate with several other East European countries - it was occupied by the atheistic regime of the Soviets. That of course had its impact on every aspect of life, including religion. All religious activities were strictly controlled by the authorities and not much was allowed. First under the rule of Nikita Chrusjtjov there began a period of relative thaw which brought more freedom also to the few existing churches. One of the benefits was the possibility to establish contacts with Christians in the West, which meant that believers in Estonia started to hear about what God was doing in other parts of the Body of Christ.

In the beginning of the '70s there was a small-scale youth revival in the Methodist Church of the capital city Tallinn. The leader of this movement, Jaanus Karner, had discovered that gospel music in the style of Andrae Crouch, Edwin and Walter Hawkins et al was something that Estonian young people found relevant. A gospel choir was formed, called Sela, which besides singing the songs of the aforementioned songwriters, also nurtured the talents of several local writers, singers and musicians. Surprisingly enough the same movement gave birth to a progressive rock group, In Spe, led by a preacher's son Erkki-Sven Tuur. While in the Methodist Church they recorded a musical project - Via Avium - which brought them a much wider recognition. After some personnel changes they went mainstream and recorded an album for the Melodija recording company (the only one in the Soviet Union), 'Concerto For Typewriter', which was recently re-released on CD by the French progressive rock specialists MUSEA. It mixed classical compositions with rock or symphonic orchestration and MUSEA describes it as a "pure gem". Erkki-Sven Tuur, who was one of the main forces behind In Spe, is now an internationally renowned classical composer.

Closely connected with the gospel choir Sela in the Methodist Church were gifted singers/songwriters Arved and Pille Magila, Ants Saluraid, who recorded several tapes with his songs, Kadri Hunt and Elo Toodo, who later became highly recognised in various musical circles. It would be true to say that the musical youth revival in the Methodist Church came to an end with the immigration of Jaanus Karner to the United States and one of the last events in this epoch was the conversion and subsequent immigration to Sweden of one of the most popular Estonian female singers, Marju Kuut.

Another source of youth revival was the Oleviste Baptist church in Tallinn. From the mid '70s they started to organise evangelistic services for young people and music played an important role here as well. The main force was the youth choir Effataa, which brought to Estonians several Christian musicals, amongst them If My People by America's Jimmy and Carol Owens. Very encouraging to the Estonian Christian music scene was the visit of Living Sound in 1979, led by its director Terry Law. They were the first swallows to come to the much isolated East Europe and brought fresh winds. After them came several famous Christian musicians from the States, who brought much encouragement, but also material help in the form of equipment and recordings, Scott Wesley Brown having a prominent place among them. He actually helped to start the manufacture of Christian music tapes within the country itself, both of local artists and of several well-known American musicians, like Phil Driscoll, Debby Boone, Michael Card and Michelle Pillar.

Although there existed some recordings of Estonian Christian musicians even before 1984, this year marked the release of the first professional Christian music in Estonia -Lydia's 'Olen Vaba' ('I Am Free'). It was secretly recorded in one of the State owned studios, the cassette papers were printed in Finland and then smuggled to Estonia and the tape itself was secretly manufactured in a governmental tape factory. It was the first release of Charismata Ministries, which just some years later started to play an important role in distributing contemporary Christian music all over the Soviet Union. Although the tape bears the name of Lydia (Hobesalu) on its cover, it included two other participants as well - Tarmo Vardja, who was the choir leader of the aforementioned Effataa choir and a professional violinist, and Raimond Jakobs, who besides singing was also the producer. All of them belonged to the Oleviste Baptist Church. Lydia Hobesalu has since then released several tapes of her own, the latest one 'Nagu Koit Magedel' ('Like The Daybreak On The Mountains') coming out in 1995, consisting of pop songs written by Lydia herself.

The second part of the '80s can be described as an active period of introducing mainly American CCM to people all over the former Soviet Union. It was a joint effort of some Christian musicians, most prominently Scott Wesley Brown, and record companies in the USA, like Sparrow and Star Song on one hand and Charismata Ministries in Estonia on the other. Estonian Gospel Distribution Network was founded and cassette copies of all albums received from the States were sent to different churches in many parts of the former SU, including Latvia, Lithuania, Ukraine, Georgia, Armenia, different places in Russia, etc. Reportedly this brought many young people to the Lord, which means that Christian music has played a major part in several youth revivals not only in Estonia but also elsewhere in this region.

In Estonia there erupted a strong revival among young people in 1987, which is known under the name The World Of Life Movement. Thanks to the emphasis on Christian music in this movement, several of Estonia's top musicians and singers became Christians, included Joel Steinfeldt and Tonis Magi, who was one of the most loved singer in the Soviet Union as a whole and whose concerts in Moscow were often sold out. As this youth revival flowed into the so called "singing revolution", which finally brought forth the liberation of our country, the Christian songs of Tonis Magi became almost national anthems, which were sung before large gatherings of hundreds of thousands of people. Later, in the '90s, Tonis Magi has released three CDs which contain both Christian and secular material and he continues to be a popular singer in Estonia.

Another interesting phenomenon in the Estonian Christian music scene has been a group of two twins, married to each other, called Sonajalg. They too rose to popularity during the hectic days of this "singing revolution" and their success was enormous. Their first tapes were recorded and manufactured in Finland, but later they established their own studio in Estonia and recorded several tapes and CDs at home. Their records have been sold more than any other artist's, whether Christian or secular, and total up to several hundred thousand! There musical style is pop, in some ways similar to Abba or the Christian group Silverwind, which once was pretty popular also in Estonia.

Another well-known and talented Christian artist is Elo Toodo, whom we already mentioned in connection with the Sela gospel choir in the Methodist Church, where she began her musical career. She is a professional musician (violinist) and besides her own cassette album 'Silently' (sung in English), she has performed with the group Psalm 102, consisting of many well known Estonian jazz musicians, like for example the bass player extraordinaire Taavo Remmel, who has had an enormous impact on the whole Estonian gospel music scene, but who is also well known in secular jazz circles. Elo Toodo's songs are a mixture of jazz and soul and black music has always been her main interest. At present Elo is one sixth of the vocal jazz ensemble Swing Sing Sextet (Kiigelaulukuuik), who in 1995 released their first CD 'Siidiplaat' (The Silk Disc').

In recent years several new talented Christian singers and groups have released their tapes, for example Andres Jaatma and Kenno Leier, and some popular mainstream singers like Henry Laks and Karl Madis have received Jesus into their lives and music. Among young people of today one of the most popular Christian singers is Villu (actually Viljar Olesk). As a former DJ and club dancer he certainly knows the musical preferences of young people and both of his cassette albums 'Tee, Tode Ja Elu' (The Way, The Truth And The Life') and 'Inglid' ('Angels') are constantly playing in the tape decks of young people. One could say that he is the pioneer of Estonian sanctified dance music!

Gospel rap has also recently emerged in Estonia. Two young guys, Andrus DJ GospelRapp and Tim MC TimOtheus, being inspired by Americans Scott Blackwell and T-Bone, have had a pretty fast rise to prominence. Their first concert under the name Revolution J took place this very summer and already in October they released their first tape album 'Roosteliblikas' ('Rust Butterfly') which is very popular among the young generation.

There are two factors to be named which have greatly contributed to the establishment and growth of the Christian music scene in Estonia. One of them is of course Christian radio. It all started with a Christian music enthusiast Ulo Niinemagi, who received a word from the Lord about going to the State owned radio station (then still Soviet) and asking for time to time to have a Christian music programme. Miraculously they said yes and March 1991 marks the beginning of the Christian music invasion on Estonian radio. For two years Ulo Niinemagi had his monthly gospel programmes on Estonian State owned radio, inviting several musicians to come to play and sing live on his programmes (Perry & The Poor Boys, Larnelle Harris, etc).

In recent years two independent Christian radio stations have been established in Tallinn - The Family Radio and Radio 7 (which is an IBRA branch) - with sister stations in other parts of the country. Both of them have Christian music programmes of various kinds, including charts. The latest addition has been a weekly four hour live show on Radio 7, where one hour is dedicated to sanctified dance music ("Christian rave party") and one hour to Christian rock ("Rock block") and which is hosted by the author of this article.

The other factor is the yearly gospel festival which in 1996 took place for the eighth time. It has been organised by several Christian organisations like Estonian YWAM and Young River Ministries in the States and sponsored by different churches. Besides our local Christian musicians and groups we have had the possibility to see and hear such famous and talented artists as Iona, Rick Cua, Phil Driscoll, Sheila Walsh. Paul Smith, Bruce Carroll, Scott Wesley Brown and in 1996 The Kry and Jennifer Knapp. 1996 was also the year when our first Christian music publication, the magazine Heaven's Music (Taeva Muusika) saw the light, of day.

Although many wonderful things have taken place during the last years in the Christian music scene in Estonia, there still remains much to be done in firmly establishing this exciting God given form of human expression in the society, after the dark years of communism.

Such an historical but very encouraging article, thank you so much.