It's the sound of Britain's new wave of worship which has been a major influence on Nashville's SONIC FLOOD. Ian Matthews caught up with the guys. 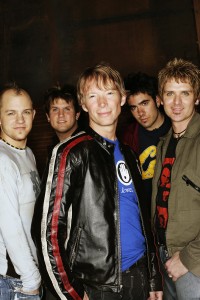 A new name to watch out for this year is American band Sonic Flood. This band has a long pedigree of musicianship within CCM Stateside, with (amongst other things) a keyboardist from dc Talk and a guitarist from Seven Day Jesus. At the end of last year they came together to look for something deeper than what they had experienced in music thus far. The result of this is the eponymous album to be released soon by Gotee (through Alliance Music in the UK). To British ears there is something familiar about the sounds on this CD, and clues to this are given in the covers of Martin Smith's "I Could Sing Of Your Love Forever" and Matt Redman's "Heart Of Worship". I asked the band what their motivation was for the project. "Originally, we were playing some local clubs in the Nashville area. At the time we were going after a mainstream, pop style break, we were doing the normal stuff that everyone in CCM does - trying to be as cool as possible and as much like the world as possible, and then sneaking the Gospel in at the end of the show. We then inserted one worship song into the show - probably because it was the thing to do.

"After a few shows it became the focal point of the entire concert and we couldn't wait to get to this point because it was so powerful when it actually came. The president of Gotee Records came up to us after one of the shows because he was so 'blown away' by the worship time. He asked us if we would consider doing a project, which would encompass the idea of worship he found there. At the time we though he was crazy as there was no way we were going to be a praise and worship band. We had worked hard and worked our way up to make something of our project. A little while later we visited Brownsville, to the revival, and in about a month God had turned us around completely! We pretty much abandoned everything we wanted, all our goals. We started wanting to do music that was glorifying God, something that we could do directly to him. We wanted to find and write songs that start here on earth the worship that we will be giving to God for eternity in Heaven."

As mentioned above the different members were all playing for different projects. They describe how they came together, "We were all playing in different bands and would meet up occasionally at various festivals across the States. We were just friends, but started to realise that we had some common goals and visions that God was giving us."

On listening to their CD it is clear that there was a particular bias to their musical influence. "Delirious? are more of a philosophical than musical influence, they are paving the way for what we want to do. If anyone was to listen to the CD it would be obvious who our influences are. There is a strong Radiohead influence. A lot of British bands have influenced us a lot, especially The Verve and Oasis. The British bands have really captured something in terms of melodies and creativity, rather than a mould."

They go on to explain why they thought this was, "This is probably because of the way that British radio is set up as opposed to the USA. In the UK radio is set up so that it is much more conducive to artistic expression and creativity. By the time something has become a hit for an American band it has become so watered down and so packaged. Everything is so packaged and down to formula. It seems that only when the British decide that Oasis is a cool band that America decides the same! The music is so much fresher. This could also be down to the fact that Europeans have much more of a world view, whereas many Americans grow up and live in the same State, never leaving it. So there is not so much culture and experience to draw upon when writing music."

With the current situation concerning Christian radio in the UK, their thoughts seemed particularly relevant. "Because of the restrictions on radio here, bands have had to build up a following based on concerts, word of mouth. It is phenomenal how many records bands such as dc Talk and Delirious sell here considering the difficulties Christian radio has. Delirious? started off in 'grass roots' worship, built things up and now they're heading off into the mainstream. It seems that we're going into the other direction."

There is no doubt that worship has become the object of obsession for the band. "That's why we are here. It seems that anything that is happening in worship at the moment is happening in England. I think that this is the birthplace of what God is going to spread worldwide, in a restoration of worship. We want to spend time in England soaking up what is happening, to receive an anointing and take it back to the States. The Matt Redman song we cover on our album ("When The Music Fades") sums up a lot of what we are about and want to be and do."