John Cheek spoke with SOPHIA DADY about her debut EP 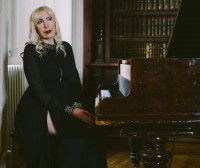 When Cross Rhythms reviewed the debut EP 'Closure' by Leicestershire's Sophia Dady we were greatly impressed with the first song: "With such a powerful voice with its hints of Tori Amos and a top rate production from George Shilling (Primal Scream, Blur), "Reach You" could be a huge hit on mainstream radio if it got the play." As it turned out, that radio play never materialised but one is left in no doubt that singer, songwriter and pianist Sophia is a potential hitmaker of the future. I spoke with the performer from her home in Barrow-upon-Soar and asked her how she felt about getting her first release out into the marketplace.

Sophia: It was all a bit surreal. It didn't feel real. It was exciting, frightening and every emotion you can imagine.

John: Tell me about your early years, in terms of music and growing up as a vicar's granddaughter.

Sophia: My mother actually bore the brunt of being a vicar's daughter! She was always under the spotlight because of what her father was. I myself always wanted to go into the ministry but, being very old-fashioned as he was, he couldn't have a female in the pulpit. So I decided to take a side-step and become a funeral director, partly so I could keep him happy. I was a funeral director for 18 years; hence my coming (back) into music a little bit later. It's been quite a career change! My father was an artist, a sculptor. He sadly died when I was 14. He was the Director of Art at Stowe School and so I grew up in the grounds of the school in Buckinghamshire, which was very beautiful. My mother was an avid pianist and so between the two of them I don't think I was going to escape the artistic streak.

John: As a teenager, what sort of music did you listen to?

Sophia: Earlier in my life, my father had been in an early incarnation of the Bonzo Dog Doo-Dah Band and so I was brought up on jazz. When I was 13 or 14, I had to find my own way and I was moved by Kate Bush, Tori Amos and Beverley Craven, who were prominent in the late-'80s/early-'90s. I wished I could play like them. I wished I could be like them. They were obviously 'piano influences' upon me. By now, my father had fallen ill with a brain tumour and for three years my mother and I nursed him. He sadly died when I was 14 and, at that time in my life, I put pen to paper and began expressing my emotions to music. A lot of it was music for the Church, but I don't know where that came from! It was happening and it was an outlet for me. My local church were very supportive of me at that time, so I joined the choir, became a bell-ringer and got heavily involved. It carried me through it all for many years and it's still a 'root' point for me; it's something which has stayed with me through life. You've always got your friends, in church.

John: Tell me about the song "Reach You".

Sophia: "Reach You" is about the power of the unspoken word. It's about when you feel very 'moved' towards God, or towards another person. It's about not being able to voice that emotion. It's about knowing that there's this big power, this big 'thing' that you've got to let go and walk away from and move on. When I'm writing songs I never know what I'm going to write about until it happens. I sit at the piano and the music comes first; the music is paramount. Then the lyrics come. I never know what I'm going to sing about and it's exciting because whatever it becomes, it always surprises me, too. 'Reach You' is a very deep song. Probably closest to it lyrically is "Anna's Song" and that's about a walk with God; it's about the strength to carry on "in this world where I'm nothing/Unless I'm with you." It's powerful and it's about love being the centre of everything. The "greatest of these is love." Without love, you will never have the inspiration to do these amazing things.

John: To me your music sounds very gothic, dark and complex. Do you go to a deep 'place', maybe a dark place in your memories, to get out what you have to say?

Sophia: I guess so. . .it's completely involuntary. I couldn't sit down at the piano and just decide I'm going to write about such-and-such today. I have to be moved. My emotions, my soul have to say: this is it, I'm singing this song that's now happening. It's almost like my soul is coming out and whatever I'm singing at that time is voiced and put down on paper - "ah, that's what it is." So it's a kind of healing process and some of it is dark. Some of my songs I don't play in public because they're dark and some of them I do - I hope that they move people in the way that they've moved me. To move on, effectively.

Sophia: It took a long time, but it was a fun experience. My producer George Shilling and myself got together and for two years worked on these songs. I'd ask George what he thought of a song and he'd put his magic over it; he's a fantastic musician and can turn his hand to whatever I ask of him and it always sounds amazing. He's also an amazing cellist and so all the strings are down to George: they're what bring the tracks to life.

John: George has previously worked with Blur and Primal Scream. How did your paths cross?

Sophia: I didn't live many miles away from him, in the Cotswolds where he's still based. We came across each other, we eventually agreed to do something and so I played him my songs and it was the start of a fantastic working relationship which has been on-going for around seven years now. If something just works, you know that it's right.

John: One of the tracks on the EP is "Mountainside".

Sophia: It was one of the first tracks that I wrote when I made the decision to give up funeral directing and made that big step towards my music full-time. Something I long wanted to do. It's about a journey through life, climbing up a mountain to reach your dream, because until you are true to yourself, it'll keep coming back until you do what you are meant to do - and this gift that God has given me is this songwriting. Until I do it, I won't rest, and so it's about this journey and my musical life.

John: How did being a funeral director affect your faith - and your music?

Sophia: It was a big influence, because I was going to be a musician and be famous, when I was a teenager! My mother told me to take my head out of the clouds and get a proper job. Being defiant, I decided to become an undertaker. I thought I'd do it for a few years, until I did my music, my main passion. But the funeral work is a way of life, a vocation and it was rewarding to work with families and be a help to them, so I stayed in that job for 18 years, seven months. It did have a big impact on my life. It was my life. Music became a side-line and it seemed to be what God wanted, at that time. Being a funeral director does make you think about life and how frail life is - how precious it is. Never take anything for granted and be grateful for what you have.