Souljahz: Soldiers with the Soul Jazz

Hip-hop, R&B, pop and rock meet in a blistering musical marriage when SOULJAHZ get together. Mike Rimmer met the San Diego siblings. 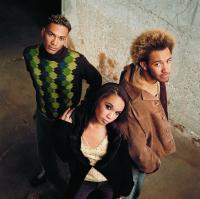 Although I have to admit that I was familiar with Souljahz from their independently released debut album, nothing prepared me for the power of 'The Fault is History', their debut for Squint Entertainment. Every year I take a trip to Nashville for Gospel Music Week and hear lots of new music, see lots of new bands play and interview plenty of people. Every year Admiral Cummings asks me on my return, "What was the hottest band you saw?" As the year closed, plenty of people asked me, "What was the best album of 2002?". The answer to both questions is the same - Souljahz!

Sitting in a record company sales conference on a warm Saturday afternoon in Nashville, the Souljahz album shook me out of my post-lunch stupor and then the band played live and unplugged. Before the song was finished, I was sold. Rachel, Joshua and Jacob Washington are the siblings responsible for the melting pot of R&B, pop, hip-hop, poetry and rock that has become 'The Fault Is History'.

Meeting the trio in a hotel suite in downtown Nashville, it quickly becomes clear that with names like Joshua (22), Jacob (known as Je'kob, 20) and Rachel (17), the Washingtons were brought up in a loving Christian environment. Each came to a play of faith whilst still at school. Joshua talks about his parents, "My dad is like a street pastor. He's got like a 'church' and it's got probably about 100,000 members! And they're spread out from here to like Africa! He's a true preacher, you know what I mean? To the fullest extent. He doesn't stand in front of a pulpit every day but every person, if you talk to him for more than like 34 seconds, he's definitely going to start talking about God, the Bible, or some deep theology...something like that. He's very deep in the Word and it's very real to him, spirituality and everything. My mom is the same. She studies the Word a lot. She understands it and comprehends it and it's real to her. So we have a real upbringing in that. To understand AND place it in your life every day. Not just saying, 'Oh that was a good story!'...but to apply it."

The diversity of the musical mix that is central to the impact of their album also makes it difficult to box the band stylistically. Jacob asserts, "A lot of people pigeon-holed us more as straight hip-hop in the past because of some of the stuff that they've heard. The indie release was mostly hip-hop. But when we visited Europe to record our first album and we did stuff out there, we saw how everything out there is more mixed. You can have country at the top of the charts, rap right under that, hip-hop, R&B, jazz...whatever. Whatever is hot because it's all music! I want to be able to do an R&B song on the album, and then right after that you hear an acoustic song. That to me is music." Rachel cuts in and elaborates, "When we write music, we write from our hearts and from what we've lived daily. Every day we listen to all kinds of music. So that obviously shows in our music in itself. We write from our hearts, and in our hearts is all kinds of stuff. It is really cool because it's got a lot of variety on it."

The fact that the band write from the heart means that they cover a huge amount of ground both spiritually and thematically on the album. They touch issues that aren't often aired in Christian music, subjects that are important. Racism, poverty and abstinence from sex are all there. "The Colour Hate" really hits home. Joshua shares, "That song is a very, very important song on the album because of the fact that it's such an issue in our country. It's probably a huge issue in a lot of countries but mainly in ours, media wise. Everything that happens becomes a big media frenzy. That song is about equality. It's not about holding the black man down, or Asian, it's all about the fact that we were all created equal. We're all created in God's image and we were all created COLOURFUL, and DIFFERENT and UNIQUE...with different fingerprints and everything! That's an amazing thing, to look at your hair, and to look at mine and look at Jacob's...and be able to say that we are different. If we all looked the same, it would be a very, very boring place to live. And so to be able to understand cultures, that's what that song is about. So we're just people. We're living, we're all struggling, we're trying to keep it righteous and do things right, and raise our kids and pay the bills and all that. The whole race thing is so out of fashion! It's out of style and it needs to be squashed."

The band are working within the Christian music scene and at this point in time I've observed that a lot of Christian labels are wary of certain issues being raised in songs and here are Souljahz pushing the boundaries a little. Joshua observes, "For some reason, the acts that are touching on the stronger subjects like pre-marital sex and drugs, school shootings and the stuff that we're really talking about seem to be coming from the West Coast. Our producer Tonex, his whole catalogue goes through that! P.O.D. obviously talk about that, our album's about that and there's Lifehouse. So maybe lyrically and topically it's like, becoming a West Coast thing, just because we're blunt and we live on a beach and we say what we want!"

When it comes to pre-marital sex Rachel has strong opinions, "These kids hear the negative side of it every day. They watch MTV, they watch anything on TV or listen to the radio. They hear all the advice from the negative side every single day and that's okay for other people to do it! But we're not supposed to talk about the positive side?! If they never hear that side of it, they're only going to hear what everyone else has to say about it. There's got to be that balance between good and evil." Jacob joins in, "If you just preach about 'Jesus came to save you, and if you don't believe in God you're going to hell!', it's not enough is it? There's so many kids who are going through problems like child abuse, pre-marital sex, racism and things that made them take big turns in their lives. I think that God applauds when people talk about those kinds of issues." Now it's Joshua's turn, "Even the Bible addressed all those issues! That's what I have a problem with. That's what I'm constantly trying to comprehend and I wish somebody, from whatever Christian label where they are doing this, I wish they would come and tell me why you can't talk about the issues that the Bible discusses on a very blunt end!"

It is a fact that in contemporary culture that on the radio you can hear any opinion about sex except God's. Yet the issue remains something very important for the group. Rachel responds, "You get everything except the opinion of the people who are SUPPOSED to be out there, encouraging kids not to do it! So it's like where do they hear it from? If they don't ever walk in a church, or be in their local Christian bookstore, where are they going to hear it from? So that's basically our purpose. Just to go out there and encourage them to think that maybe God has something else for them, somewhere, someway that he wants them to go and not to limit themselves. And not to limit him for sure!"

"True Love Waits" most powerfully addresses the subject on the album and fellow Christian artist Philip LaRue makes a guest appearance. Rachel explains, "There's the LaRue Petition. They want to bring back teaching abstinence in schools. Instead of just 'safe sex' or 'use a condom!'. Very, very rarely do schools ever teach about abstinence. That's the number one and only way of being sure of not getting STD, of not getting pregnant. People talk about all the consequences that you're going to have physically, but no one really talks about the emotional consequences. I think we can all speak on that. It's more of an emotional thing than anything else. I think that a lot of girls and guys out there, they don't wait because they see what they see on TV and nobody ever gives them the hope that there's somebody out there for them. That's very much like a fairytale/Prince Charming thing to people... 'Yeah, there's this one guy out there for me?....Right!' They need to hear that from people who they look up to. People look up to artists - their confidence and the way they hold themselves. And I'm going to use that for all the right reasons if I have the chance. I want to tell them and encourage them that there IS someone out there for them, that it's not a fairytale. That God really has created one person out there for you and you should wait for them, because they're waiting for you."

'The Fault Is History' is one of the best Christian music releases of the new millennium and Souljahz are a group with plenty to say and the musical talent to carry it off. Out of that confidence and boldness, they sum up their ministry for me. Joshua explains, "I think everything we do is ministry any way you look at it, because we're spreading that message of Scripture of LOVE. To love one another as you would love yourself. That's a big one! And also HOPE. That kids can have hope and all the issues that we've been talking about, whether child abuse, drug abuse, alcohol abuse, or whatever it is...that there's hope for a better tomorrow. It can always get better, you can always improve. And then RESPECT. To respect yourself, going to school, going out because people respect you more when you respect yourself. That's the reality. So on a ministry point, we want to get that across to as many people as we can talk to. We're kind of like the 'introducers' so we try our hardest to introduce these values to as many kids, as broad an audience as possible."