Sounds Of Blackness: Atlanta powerhouse ensemble crossing over to R&B

Singing on a Prince album may not be everyone's idea of Christian roots. But few can doubt the impact of the hot new gospel-dance album by SOUNDS OF BLACKNESS. Tony Cummings reports. 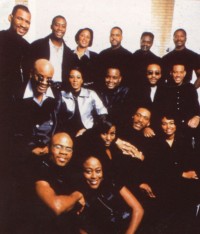 The release of a new black choir album would usually pass unnoticed by most of the Christian media, let alone the hipper-than-thou black music publications. But the release of 'The Evolution Of Gospel' by the 40-voice Sounds Of Blackness has brought forth the kind of delirious praise from soul magazines normally reserved for platinum-toting megastars. "Simply unmissable", was how one critic described "Pressure Pt 2" on the album; while the song "Optimistic", pulled off 'The Evolution Of Gospel' for single release, had 'Blues And Soul's' Mark Webster waxing lyrical over its quality: "Another brick in the wall that shows you can make popular, contemporary dance music with a song and a lyric that wasn't invented in the sandpit at playtime and... is also vindication of the fact that genuine inspirational music from a Gospel group 100% proper can and will be commercially viable... This is enormous, uplifting music that bursts with life and soul."

As Gary Hines, the group's musical director, conductor, arranger and (in some of the tracks) producer, explains; "This album is meant to portray the essence of the African-American experience through our music, from the beauty of African melodies to the complexity and depth of spirituals, gospel, jazz, blues, R&B and rap - it's an expression of where we're taking gospel music and where it has been historically."

So who are this choir and from whence do they come? The group originally came out of the Macalester College Black Choir from St. Paul, Minnesota and evolved under the tutorage of New York-born Gary Hines who assumed directorship of the choir in 1971.

"Over the years, the group has expanded to include thirty vocalists and ten musicians," explains Gary to US-based journalist David Nathan during a visit to Los Angeles. "We have a few charter members from the early days and our current membership has been basically the same for the past five years. It includes many people who came from other cities and attended Macalester College and we have people who work in the corporate world, residents of St. Paul and Minneapolis."

Gary, whose own musical experiences derived from "being a street kid in Yonkers, New York, listening to doo-wop on the street corners, hearing some old man singing the blues in an alley, listening to Motown on the juke-box, church on Sundays, listening to my Mom (a professional jazz singer) and studying and listening to African music in workshops with great people like Olatunji Babatunde, all parts of my musical education," explains that specific criteria have been in place for people who joined the group.

"I've conducted brief auditions and I always look for a certain level of musical ability and then, philosophically and spiritually, people have to be in tune. Beyond that, it's definitely about dedication and commitment."

Although their early work centred around gospel and freedom songs, The Sounds Of Blackness ("our name-change from the Macalester College Black Choir reflected the expansion in repertoire") recorded three albums (distributed at their own concerts) and began creating and performing in a number of original musical/theatrical productions in the Eighties, including "The Night Before Christmas", "The Soul Of The 60s" which featured the music of legends like Aretha Franklin and James Brown among others), "Africa To America" and "Music For Martin."

It was after Jimmy Jam and Terry Lewis saw Sounds Of Blackness in 1988 that the Big Time finally beckoned. Jam & Lewis were by then established as one of the hottest production teams in black music history whose explosive dance productions had earned a wall of gold and platinum discs. The hot producers asked the choir to sing on a Christmas album of 'My Gift To You' by Alexander O'Neal, the soul-singing star who had once briefly sung with the choir himself.

"After we did the session with Alexander they asked who we were signed with" remembers Gary Hines. "Right there and then they said 'We're going to do a project' and the rest is history"

"We were also working on another production, 'The Evolution Of Gospel', so we included material from that as well as some additional tunes that weren't in either show," Gary explains. In all, production of 'The Evolution Of Gospel' took some two years, during which time The Sounds Of Blackness lent their considerable vocal talent to sessions on the soundtrack for the movie 'Batman', as well as recording on projects for former members of Prince's Revolution.

The group had begun work on 'Music For Martin' in January 1989 (to which Jam & Lewis brought special guest Janet Jackson) and, after seeing the production, decided that much of the group's first album should include material from that show.

"Jimmy and Terry acted as overall executive producers for the album," says Gary, "and we co-wrote four songs ("Optimistic", "The Pressure, Pts. 1 & 2" and "Testify"), which we also co-produced together. On the songs they didn't directly produce, they had input and, although I'm trying to stay away from clichÃ©s, I'd say working with them was really like a dream come true... indescribable."

Of the approach to the album (which truly covers the whole range of African-American music), Gary notes: "I'm out to dispel the tunnel vision that people have about music. The album is designed to create positive images for people in general, for African-Americans and for our youth in particular.

"Certainly, making this album was a labour of love - a lot of love and a heck of a lot of labour! What it took to make this record was that unbeatable combination of prayer and hard work."

The epic scale of 'The Sounds Of Gospel', taking in its 17 tracks everything from acapella 'Negro spirituals' through to the hardest-of-hard dance rhythms (the 12 inch version of "Optimistic" comes complete with a hip hop rap), is a devastating aural experience. And in Ann Bennett-Nesby the choir have one of the soulful lest hot gospellers to emerge since Vanessa Bell Armstrong. With its release on Jam and Lewis' hot new A&M-distributed Perspective label 'Sounds Of Gospel' is available in every record store in the land. Whatever the eventual sales are Mr Hines is convinced Sounds Of Blackness will be going from strength to strength.

"We're looking forward to doing some touring and we would love to perform in the motherland, Africa, in Japan and in Europe where, people tell us, our music would really be appreciated."

The author acknowledges the use of material originally printed in 'Blues And Soul' magazine.