Southville: How small church worshippers recorded in one of the world's best studios

In 2017 there are an ever increasing number of churches who are not only abandoning hymns with organ accompaniments of old but are taking up the challenge of composing their own modern worship songs and in many cases recording them as well. What was once a trickled of such albums is now a flood and not a week goes by without Cross Rhythms receiving an album from Hawaii or Hownslow, Bogata or Bognor Regis coming directly from a local church keen to worship God with their own tailor-made music. Most local church made worship albums are, of course, of the cheap-and-cheerful variety. Having developed a music ministry of sufficient skill to write and perform original songs rather than Redman or Tomlin cover versions it doesn't take many more steps or much more money spent to record some live renditions of the church's original songs/performances. It's long been understood that only the largest mega-churches have the financial resources to make worship projects of the highest creative quality. Small churches and unknown worship leaders will soon come to realise that to make recordings that truly compete with the songwriting craft and production dynamics displayed on the latest Tomlin or Hillsong Unite large amounts of money must be spent in studio time and the experts who operate them. Top rate worship albums don't come cheap.

It was into this scenario that a young modern worship idealist called Tim Williams joined in 2014 the Elim Church located in the Southville suburb of Yeovil, Somerset. Multi-instrumentalist Tim had been a member of the Holy Trinity, Brompton worship team. Tim's story of faith and vision should inspire every local church musician in Britain.

Tony: Tell me how you started with Yeovil Elim.

Tim: I arrived here as worship pastor just over three years ago and when I arrived there were no young people in the worship team whatsoever. The majority of the team were older and then, unfortunately, within about six months, most of them left. I don't know if it was because of me or the changes I was bringing in but I was suddenly left with a very small team and I was a bit confused about how am I going to make this work. So we started offering free music lessons to any of the young people in the church. In my first year here I was teaching about 16 lessons a week on keys, guitar and drums and also doing a couple of vocal lessons. We realised we were going to have to more or less grow these from the ground up, from nothing to the team we have now. Today 80 per cent of our worship team is under 18, which is really exciting. That comes with its own set of challenges because obviously you've got to keep on improving on that quality and try to keep people in. But at the same time it's great to have such a young team that are so excited and so willing to serve.

Tony: Now I understand that you threw down a challenge to the whole church asking them if they'd like to try writing worship songs. And well over 100 came in. . . from old and young.

Tim: Yes, we had a 13 year old. In fact if I'm honest, we had even younger than that but in the official songwriting sessions we had a 13 year old. But then one of the great things was we had a 96 year old. She hasn't been to church in the whole time that I've been here because she's just not well enough to leave home. But she was lying on her bed writing lyrics and sending them in to us. We kept getting these little envelopes saying 'To Southville Music' and they would have these lyrics in and it was wonderful to see this multigenerational engagement; we'd got these children and young people desperate to be involved but at the same time you've got this 96 year old woman thinking "I'm going to get in on that as well."

Tony: I understand the whole church got involved in the song selection process.

Tim: Yes, we dedicated a Sunday evening service once every two months as a Southville service where we played eight songs so every two months we made sure there were eight new songs that we'd written in those two months. We played those eight to the congregation. When they arrived at church that evening we'd given out feedback sheets that had questions on like "What was your favourite song from tonight? Was there a line that you didn't understand? What would you like us to write about? If you could change this line, what would you change it to? What was your least favourite song?" All of these questions. We thought it was great engaging a wider audience in the song writing. And as wonderful as that was, for a lot of these people it was their first time writing so obviously the quality that was coming out sometimes you'd have bits of gold, sometimes it wasn't that great but we wanted to take this further than [just] people who say "we want to song-write." We wanted to say, "Church, this is our church album. We want your opinion. We want everybody." There was one of those Southville sessions on the Sunday evenings where we took one of the songs that we'd been writing and we got a flip chart out at the front, split everyone off into groups and said, "Right, what we want you to do is write a new verse for this song, in your group. We want you to forget the verses that we've got; we want you to write your own verse. What would you write if this was you writing this song?" It was trying to grow that creativity. So even on the finished version, when you've got the composers down, some of these songs had literally 20 or 30 people working on the one song. It would have been impossible to list all of the people. But they were able to get involved and feel like a real church ownership over the songs.

Tony: Presumably it wasn't easy selecting which songs or ideas of songs to take to the recording level.

Tim: It was incredibly difficult. What we were trying to do right from the start, any ideas that we did get in we would try to weave those into songs together. Sometimes it was bringing ideas that one person sent and matching that up with another idea and pulling those together. We had well over a hundred song ideas by the end and it was like trying to piece together these complete songs to have available to choose from, which was really encouraging. First of all we whittled it down to the 30 we were really pleased with. Then we took that to a few different people for their opinions. We worked quite closely with [well known worship songwriter] Nick Herbert. He was really helpful in the process, honing it down to what exactly we were trying to communicate through the songs and which were the best songs. We actually asked him for his opinion of what he thought were the top 10 songs. The plan originally was to have an album of 13 songs but when we got down to it we realised we'd much rather release 10 songs of this massive quality and get a really nice vibe from that, rather than go to 13 - not that there wouldn't have been 13 great songs. We thought we could really plough into these 10; polish these off, make them even better and better and it would be easier to do with 10 than 13. I think we found the final 10 maybe February time.

Tony: Social media is continuing to be a key feature in the development of the Southville vision.

Tim: Basically, where this vision came from, myself and our senior pastor Howard were chatting about what do we want to do as a church? The conversation began with social media, videos, reaching the world in other ways than through the front doors of our own church. We decided that a great way to do that would be if we could offer people a window on Heaven. If we could offer them that shop window where they can see on social media, they can see videos, they can see songs, even for just 10 seconds, that show people visibly worshipping. That is something that in our own church has proved to be a doorway into people accepting Jesus, as they have seen what other people are experiencing and think I want some of that for myself. So that was where it came from way back then. But this has always been a bigger vision than just an album for our little church here in Yeovil. We want to impact the world with this. We want people to scan down their facebook feed and see 30 seconds of a video of one of our songs, see some of those people worshipping their hearts out and ask more questions about that. We recognised that as great as it was to have the whole church involved with the writing process and to do all of that stuff, we could just chuck this album together ourselves. I could do the mixing and the producing and it would be cheap-and-cheerful. 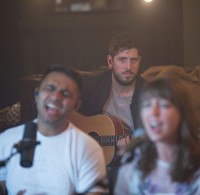 But if we want to have a wider impact, if we want this to be recognised further afield, then we need to work with the right people to blend together the real professionalism of a great sounding album and a brilliant video. We invested in 10 acoustic videos, so one for every song as well as a documentary video about the project and what's happened. We needed to work with professionals on that to get a real high quality product, so that when people do see it, they are drawn to want to know more, they are drawn to want to explore more, rather than the cheap-and-cheerful that would be amusing for our own church and everyone would love it because it was our thing, but the impact of that on the unbelieving world or even the wider church community would be very little. You'd have this cheap-and-cheerful product that was lovely like oh, look at Yeovil, they've made an album, that's cute. Whereas, if we match the professionalism with the heart of getting everybody involved we could come up with something really special, that's worth listening to, worth engaging with, that can do all that we wanted it to do in the first place at the same time as engaging the wider church community and encouraging that creativity.

Tony: Tell me about the producers of 'Freedom's Tree', Enoch John and Jonathan Owusu-Yianomah who work under the name K Collective.

Really loved this read, to see how God has just taken this project from strength to strength!! Quality songs on this album - I really do pray and hope that it will bless many people! I'm excited about the next one!!