The debut album by Sozo is catching the ear of dancers all over the UK. Karl Allison investigated the hot new duo. 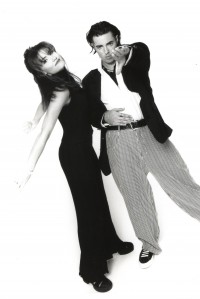 Late last year, yet another previously unknown dance act rolled off the great N-Soul production line and SOZO took their place in CCM lover's hearts with their fine debut album, 'Purity'. So what do we know about Sozo? Well, the band consists of two people - Corey and Danaielle Pryor - and they're married to each other. He used to be in the Newsboys and they were first sighted when they sang a track on the Nitro Praise album. And that's about it. A light-shedding interview with the dynamic duo was definitely in order.

But it's quite a jump from the Newsboys to the dance rhythms of Sozo, isn't it? "I was brought up on dance music in Australia. Dance clubs are real big over there. I loved listening to remixes and extended plays, even though I played in a lot of rock 'n' roll bands."

The name turns out to be something quite theological. "Danielle's parents are pastors of a church," explains Corey, "and I was going to their Bible school at the time. One of the lessons was called Sozo and I thought it was a really cool name. I didn't learn anything from the whole lesson 'cos I wrote down Sozo in about 250 different styles. Then we just called up Scott Blackwell and said we've got the name."

When Cross Rhythms reviewed 'Purity' in issue 24, Sozo were compared to Snap and 2 Unlimited. As it turns out, this would have pleased Corey no end. I asked him to describe Sozo's music. "This is tricky. I don't want to say we are Euro-sound in case I'm wrong! Our style is real pop-house, you could even call it handbag house if you wanted. There's a flavour of techno, but we really don't like to use words like techno and rave because people really don't know what they mean. People think that anything with four on the floor and some hi-hat is techno. So let's call ourselves Euro pop-house. There, I said it!"

While Corey grapples with the complexities of musical stylings, Danielle is anxious to make sure we understand Sozo's commitment to spreading the gospel. "We are in ministry," Danielle asserts. "It's not just a performance thing. We really want to see youth get saved and get on fire for God. Our album is called 'Purity' and we want people to read Romans 12 and understand that you can live pure in these last days. You don't have to get into drugs and alcohol and all these other things that oppress us. We can overcome. That's why we give altar calls. That's why we sing praise and worship songs. It's incredible how the power of God comes down and people get ministered to all over the auditorium. It's awesome to see miracles happening."

"The fruit of it is what we enjoy the most," adds Corey. "All the hours you put in and all the travelling are worth it if just one person gets saved."

It's this kind of ministry that Sozo are currently touring around the States. They'd love to come to Britain; they're just waiting for someone to invite them. So for now they'll content themselves with playing just about anywhere they can over the waters, including an invitation to the largest bikers convention in the world! More conventionally, they're also playing many of the Christian dance clubs that are springing up all over America and they are already thinking about their next album.

"We're gonna do a couple more mid-tempo grooves on it just to make it a bit more funky and we want to add a bit more guitar. We want to keep up with the trends but we're not going to water down the message."

The opinions expressed in this article are not necessarily those held by Cross Rhythms. Any expressed views were accurate at the time of publishing but may or may not reflect the views of the individuals concerned at a later date.
About Karl Allison
Karl Allison runs the Last Daze sanctified dance praise events and fronts the band The Big Picture

For more on Sozo visit the Sozo artist profile