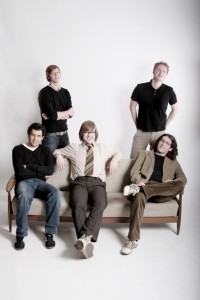 From recording with multi-nationals like Polydor and BMG to playing live worship on the streets of Heidelberg may seem like quite a journey. But as far as Germany's Ed Einsiedier goes it's coming full circle for a gifted musician who'd once played with Normal Generation? and now fronts the band Spincycle. Before their demise in 2005, Normal Generation? were something of an institution in the German music scene. Their early albums and singles were very much dance-pop evangelism not dissimilar to Britain's World Wide Message Tribe (in fact the Tribe's studio maestro Zarc Porter even contributed a remix or two). The group became very popular on the European Christian circuit playing Netherland's Flevo in '97 and '98.

By 2000 though they were taking on new group members, changing their style to a pop rock synthesis and releasing the album 'Outsiders'. The following year they were making a tilt at the mainstream marketplace with a single "Long For You" on Polydor followed by the album 'Freedom' on BMG in 2003. When Normal Generation? finally disbanded one of their members, Ed Einsiedler, formed the band Spincycle. Ed, who, despite his name, is half English, spoke to Mike Rimmer. Mike began by asking the singer/bassist how he'd come to join Normal Generation?. "I suppose I started off like a lot of Christian musicians, in the worship scene, and it was through that that I got to know the guys from Normal Generation? who were doing sort of dancey stuff, just with a backing track at the time. And then they contacted me because they were putting a band together, and it all went from there."

Normal Generation? played their last gig in 2005. Commented Ed, "The band was always about more than just the music; it was kind of a platform so that we could get people to come to our youth camps which took place every year - the More Of God camps. And we actually found that they were working better than the band itself, so we decided, 'Well, we may as well stuff the band, and carry on with the youth work'. It started with the camps, and it was going more and more in the direction of church planting. We realised that we were meeting people at gigs and a lot of them were going back to areas where there wasn't really any kind of Church that you could recommend them, and so we were like, 'What can we do with these people? We can't just send them back into the desert.' So we were just encouraging people to get together in small groups and pray for each other, read the Bible and kind of live Church in the most basic form possible."

Ed continued, "I remember the first gig that we had with Normal Generation? was really strange because I'd always been taught as a worship leader that you don't perform. You mustn't draw attention to yourself at all. You kind of point to God and let everybody close their eyes and go for it, and Normal Generation was kind of the opposite. That was really weird, to come up on stage and you hear all of these screaming teenage girls. That was really weird for me. But I suppose I've always been drawn to the worship side as well, so I've always been doing that parallel to Normal Generation. The worship thing originated with a band called Undignified. Spincycle grew out of that. The reason we're called Spincycle was inspired by the verse in 2 Samuel 6:22, where David was dancing before God. Actually in the Hebrew it says that he was spinning around, so that's kind of where it comes from."

In 2008 Spincycle recorded their debut album, giving it the strange title 'Diffuse Interflection'. Ed explained the album title. "It's all about reflecting something into a place where there is no light. I kind of see the calling of Spincycle as going into places which are spiritually perhaps a bit darker than your average church, and just worshipping God in there. It's less the case of being preachy from the stage, more a case of worshipping God there. So we've had quite a bit of success doing that. Over the last couple of years we've played in various clubs around south Germany, and also on the streets. We've gone busking, playing on the streets, a couple of times and it's amazing the kind of feedback you get from that. People are really touched by us playing and worshipping on the street. It brightens up their day a bit."