From 3rd to 18th April the eyes, spirits and often bodies of British Christians will be going to Minehead, Skegness, Pwllheli or Ayr. Tony Cummings reports on SPRING HARVEST. 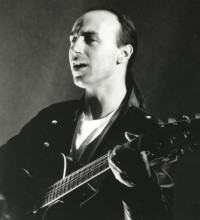 Few names in the evangelical vocabulary bring forth such mixed responses as Spring Harvest. For students of religious movements it is the single most tangible response to the lie that the British church is in terminal decline. To the staunch religious churchgoer it is a grotesque manifestation of over-the-top zealousness. To the street cred-seeking radical it is the wince-inducing gathering of thousands of happy clap-pies. To the isolationist New Church member it is an event too soft on traditionalism. To the traditionalist it is an event too soft on charismatic excess. But for tens of thousands of people every year, Spring Harvest is a point of access to a God who isn't the remote figure of religiosity nor the warm glow of self-obsessed charismania, but is a passionate real person seeking to guide his hands and feet - His church - into touching the things He wants to touch and going to the places He wants to go. To have an encounter with this amazing Being is what draws Christians to Spring Harvest in their thousands.

Yes, it's a Christian holiday with games and water chutes, comedy shows and competitions to entertain bored kids and unwind stressed out parents. But nobody would seriously suggest that the 'holiday' aspects of Spring Harvest is what draws the thousands. Nor for that matter is it the myriad of eminent speakers and authors who draw in the thousands. Nor even the advertised attractions, be they a Springs Dance Company or a Martyn Joseph is likely to extricate Joe Punter's cash from a Recession-racked wallet. What brings the throng to Spring Harvest is "the worship".

There is something unique about Spring Harvest worship. Like the event itself, attitudes to it are almost as varied as the Spring Harvesters who flock to Butlins camps each April. For some Spring Harvest worship is an exhilarating first step into the heady delights of charismatic experience after years of dusty church-manship. For some it is the sheer excitement of hearing corporate praise accompanied by a rock-solid rhythm section rather than a creaking organ. For some it is the unique atmosphere and expression of spiritual power when thousands rather than hundreds (or tens) gather to worship corporately. For some it is inexpressible, beyond saying that "God was there". But for most though it is "the worship" that draws them. When 20th century church history gets written, Spring Harvest is assured of its place. Geoff Baker, who this year is the plenaries worship leader at the Pwllheli Word Alive week, feels Spring Harvest gives something unique to the local church. "It takes something and then gradually filters it to many of the churches that haven't had access to such things before. On a purely practical level it was very much through Spring Harvest that a lot of worship bands were formed. The church saw that such bands were possible. Also, a style of music was shown at Spring Harvest to a group of churches who before would have been a bit fearful of it. Because such things were handled in I believe a very sensitive way the people began to say 'yes, this can happen without us having a great cause for concern about going over the top'."

This raises another issue. Geoff Baker continues: "Sometimes what people take as being a theological statement is in fact a stylistic statement. There is a style of worship that is associated with the charismatic movement just as there is a style of worship that is associated with, say, the Reformed churches. Today, you may find a church that is more reformed in doctrine using the Spring Harvest style for its worship. That isn't a theological statement it's a statement that some worship forms are more user friendly. But such a style doesn't necessarily indicate a church is operating spiritual gifts or whatever. I think a lot of people who wouldn't have taken on everything contained within the charismatic movement have taken on a more user friendly worship style because of what they saw at Spring Harvest."

The man more than any other who spearheaded this movement was, of course, Graham Kendrick. In CR 3 Graham talked about Spring Harvest, "I think it must be the major platform for my songs... it has given me face to face contact with a large number of people. It's not just the songs, it's, I think, people have felt they've got to know me and I've got to know them in that kind of contact... I think that's very important, actually, one of the things that people look for in a worship leader is someone with whom they feel comfortable and reasonably safe, not too safe because that would be boring but safe enough that they're not going to be asked to do something totally embarrassing."

Graham's user-friendly worship style without the feared excesses of charismatic chandelier swinging has been at the centre of Spring Harvest's appeal. Another worship leader testifies to Spring Harvest's uniqueness. "Spring Harvest is reaching such a wide constituency, 80,000 people go through the event every year," said Noel Richards. "Church of Scotland, Anglican, Methodist, Baptist, Pentecostal, New Church - it's such a broad base of people who go. A lot of people see the Spring Harvest songbook as being their agenda worship songs for the year. They go through the book looking for new songs. There is no event quite like Spring Harvest. We have our event called 'Breaking The Mould', up in Lincoln they have the 'Grapevine' celebration weekends. But Spring Harvest attracts so many people and the atmosphere is astonishing."

Geoff Baker has observed that down the years (the event started in 1981) it has become easier to operate spiritual gifts openly from the main platforms without alienating such a theologically and denominationally diverse gathering. "People fear change and people fear the unknown. But when they're able to gradually develop, say through coming many years to Spring Harvest and getting to know and trust people like Clive Calver and Dave Pope and discern their integrity, in an environment like that if a gift is exercised there is less fear that anything will get out of control."

The musical elements of Spring Harvest are of course not limited to the praise and worship. A wide range of concerts is laid on for Spring Harvesters as part of the After Hours activities. Though the 1993 lineup doesn't sport some of the more exotic CCM guests from America who have appeared in years past (Don Francisco and Glad went down particularly well) established performers like Martyn Joseph, Marilyn Baker and Phil And John will please the 1993 Spring Harvesters. And it doesn't stop there. Though the days when Buzz magazine's Goddard and Cummings could get their hands on the Spring Harvest Fringe budget and fly over rad rockers the 77s from the States are gone, there's still some hard rocking music at each Spring Harvest. For a few years Split Level were in danger of becoming permanent youth-event fixtures at the event while now it seems that Eden Burning have become every youth worker's favourite band and this year the Cheltenham roots rockers will be playing every site.

Spring Harvest is a unique animal and one that is doing a massive amount of good. Certainly it has faults. Maybe it needs to overhaul a few of its more stylised Big Top Celebration features. Certainly it could do with making its teenage celebrations more culturally relevant in today's musical climate of rave and Faith No More. And it needs to look beyond the obvious for live concert entertainment. But this is nit picking. Come a few weeks tens of thousands of believers will be singing "Lord I Lift Your Name On High". For some that's all it will be. Singing. But for others, hearts will be healed, minds envisioned and spirits led to a place where glory can be glimpsed. And that's a lot to be grateful to Spring Harvest for.