Starfield: Canadian band worshipping The Lord of the Starfield 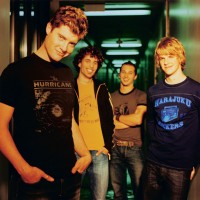 With the continuing success of Canadian artists in the Nashville CCM scene it's no surprise that Winnipeg's Starfield have made inroads since they emerged on the international marketplace with their self-titled 2004 album on Sparrow. Like another Sparrow group, Switchfoot, the band revolve around two brothers called Tim and Jon. In this case it's the brothers Neufield. Together with bassist Shaun Huberts and drummer John Andrews, singer/guitarists Tim and Jon formed the group in their Winnipeg hometown in 2001. They borrowed their name from another Canadian musician, Bruce Cockburn and his 1976 classic "Lord Of The Starfields". While Tim was leading worship at churches and college campuses across Canada, brother Jon was learning the ropes of worship and the signatures of modern rock through his home church. Joining creative forces, the two of them and their friends cobbled together any gig they could find, eager for the opportunity to play. When the time felt right, and when they had drawn together enough songs and money, the promising band made its first independent album.

Two years of touring and honing their sound brought Starfield the opportunity to record a second independent project that brought the band into the radar of a diverse set of industry insiders, including longtime Canadian music journalist Karen Bliss (Rolling Stone and Audience), the brass at several major Canadian labels and finally the folks at Sparrow Records, where they found their label home. Tim acknowledges there was a dichotomy to having gatekeepers from the general market be interested in music made primarily for the Church. "The whole mainstream connection, having Karen Bliss and mainstream labels interested in seeing where our music could go, was really encouraging," said Tim. "It was cool to have people not in Christian music say they liked the music, but we are most excited about leading our generation into a renewed sense of relationship with our Creator."

'Starfield' was produced by Matt Bronleewe (Jars Of Clay, Rebecca St James) and released in Spring 2004 and attracted listeners with its multi-textured layers and its worshipful feel. In fact, one song on the album, "Filled With Your Glory", has become a staple in churches across Canada. CCM magazine wrote Starfield's music "resonates with vivid worship lyrics and melodies that recall acts like Jars Of Clay, MercyMe, Delirious? and early Sonicflood." Said Tim on the album's release, "We want to keep doing what we're doing and as things grow on a bigger scope, we want to remain true to the things we're called to. Being honest, being transparent and encouraging our brothers and sisters to know God passionately! We want to write songs that are corporate, that people will be singing in church for decades. The same God who created the star fields and everything else in all creation has given us this opportunity to give our talents back to him, and we're taking it!"

With a new drummer 'Gordie' replacing John Andrews in 2005, Starfield completed a tour of the USA with Todd Agnew. Jon spoke about the band's plans for the 'Starfield' follow up. "Tim and I have spent a few days in the studio already with our new producer Ed Cash (he did the latest Chris Tomlin record) and we're really excited about the synergy and shared passion that we have with Ed for our new records. Things are already shaping up and we're excited about the direction of the songs and the album. We will be doing the bulk of the recording in November with the official release date set for March, 2006.

"As we've mentioned before, our prayer is that we will write and record songs on this album that will lend themselves to being singable and corporate songs of worship, that the songs will reach further than we could ever take them. One song that has been standing out for us as of late is one called 'Gloria'. The lyrics in the pre-chorus and chorus (subject to change) are: 'Whatever the season, wherever you lead me/May my song always be/Gloria, Gloria, with much and with little/I sing Gloria, Gloria/To God the provider, I sing Gloria.' This song was somewhat inspired by the concept behind Matt Redman's 'Blessed Be Your Name', or the old hymn 'It Is Well.'"

Continued Jon, "There's a verse in Philippians that sums it up really well: Philippians 4:11 - 'I've learned by now to be quite content whatever my circumstances, I'm just as happy with little as with much, with much as with little. I've found the recipe for being happy whether full or hungry, hand full or hands empty. Whatever I have, wherever I am, I can make it through anything in the One who makes me who I am.' (The Message) So that should give you a taste of where the songs are going and what is driving the new album."

I love Starfield. Thier music is so powerful and uplifting. IT really showes God's love and shares it with all. I'm looking forward to the new CD. ~Mary Kate AKA Starfield's #1 fan!!! PS Starfield rocks my socks!!!!!!

My teens came home from Liberty camp inspired from Starfield's worship songs.
My son plays them in the youth band. We use them to worship at home. Every song has such communication of love for the true God. We are excited about the next CD. God is using this music to stir up new youth leaders. Thanks to God and Starfield.

I absolutely love you're guys' music and God loves it too.

Starfields first album is just amazing. I want to encourage you to buy it and listen to it if you havent done already. Its one of those albums for me personally which i can have on in any mood and take something out of it every time. These guys are so talented and its so encouraging to see God planting amazing worship songs in their hearts :)

For more on Starfield visit the Starfield artist profile