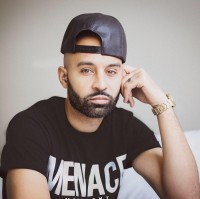 StefanOtto, currently serenading xRhythms with standout tracks "Night Falls" and "Defiant" from his 2019 album 'Til Heaven Comes' (Menace Movement Records), is not only a rapper at the top of his game, but he also has an excellent beard. Where can I get some of those precision cutters? And where can I get one of those baseball caps with the brim sticking out the side? All the ones I see in the shops have the brim sticking out the front.

It remains to be seen if StefanOtto is in any way related to Stephan Otto, the German composer who was around in the early 17th century, or if he's simply a fan or whether this is just a coincidence. But I bet Herr Otto didn't come up with an album (sonata?) title as good as 'Novelty Of Self', which first introduced StefanOtto to the world in 2008 and resulted in the Virgin Megastore in Orlando, Florida having their biggest ever turn out for a local musician. That was just the start.

StefanOtto has released a further two albums, 2011's 'Love Means War' and 2019's 'Til Heaven Comes'. Born in Martinique and raised in Dominica before settling in Orlando, Florida, the bi-lingual rapper has toured Jamaica and performed for widows and orphans in Rwanda. He gets around. And it's interesting that he toured Jamaica because although you would think that his childhood proximity to reggae and dancehall, he is firmly in the rap camp, telling website Rapzilla in 2011: "It's funny; although I was born and raised in the Caribbean I would say I did not have your traditional musical influences growing up. I seemed to gravitate more towards hip-hop artists and rappers. Something about it seemed cool to me. I loved the storytelling of the culture and the honest expression about life, love and social issues. Listening to how artists could craft their thoughts and convey them in this urban form of poetry just seemed to win me over."

His journey into rap is also interesting, showing that he is thoroughly organic. He didn't start out writing rap. "It was just me, a pen and pad and a heart that was full. I only wanted to be able to communicate how I was feeling for myself, so when I began writing, I would say it was probably a more selfish act and out of necessity. As time passed I became more intentional at honing and developing the craft and dong it in a way that it could serve others." StefanOtto was converted when he was 14: "As time had passed, I grew and matured and had to make a decision to not be selfish about music anymore and only make it for myself. It puts you in a different place when you begin to serve people instead of yourself with your music."

As seems to be the norm in rap/hip-hop circles, 'Til Heaven Comes' has multiple featured artists and producers. It's a good way of exploring the music of others I suppose. You've certainly got a lot to choose from here. The tracks feature appearances from Datin, Selah The Corner, Jered Sanders, DJ Morph, Jay Cabassa, Jes Norris, Jameil Walls and more. Production credits include Tone Jonez, Tee-Wyla, Theory Hazit, Marv4MoBeats, Soundnami and others. Surprisingly, the overall production sounds rather uniform, like the sound engineer was the same for each track. Leave that compressor alone man. Even so, if you like well-produced smooth rap with an abundance of ideas (some of which, to be fair, you may have heard before) deliver a technically excellent and heartfelt set of tracks then look no further.

The title track opens StefanOtto's latest collection with a piano riff begging for a wordsmith and he doesn't disappoint. Check this line: "Writing for freedom while they're rapping for an Esclanade". Brilliant. StefanOtto 1 - Non-Christian Rappers 0. An Esclanade is a Cadillac car by the way. The second cut, "Night Falls" (feauring Jered Sanders) comes on like St Germain's smoky jazz beats with a trumpeter jamming in the background. This album is growing on me.

"Body Bag" (feauring Datin & Selah The Corner) with its urging distorted organ refrain takes the set into darker musical and political territory: "So you like me better dead, huh? Is that what it is?" "Upside Down" (feauring Datin) features a Public Enemy style horn sample that plays on throughout and vocoder vocal effects on the refrain. On "Upside Down", StefanOtto told website jamthehype in 2019: "They [Christians] were being labelled as the ones who were turning the world upside down and people had an issue with it. Everything that seemed to be in the right order, they were flipping it."

"Idols Die" (feauring Datin) involves a rap StefanOtto wrote following an idea Datin (the owner of Menace Movement Records) had with the filmmaker Vincent DeMarco, about idolatry in popular culture: "Culture is throwing everything at us and fighting for our affection. Fighting for our worship and we need to repent and get back to the true and living God." Amen.