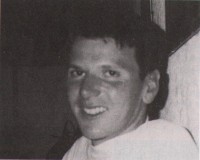 Steve Baker is a busy man. Having pioneered the birth of London's Abundant, the Christian nightclub which has proven to be a major influence in the burgeoning sanctified dance scene, Steve is also one of the co-founders of DBass Records whose releases are manufactured/distributed through Nelson Word. I tracked Steve down to his London home.

Liz: Tell me about the DBass label.
Steve: "DBass Records was set up by Tim (Riches) in Leeds. He approached Word Records saying he'd really like to do progressive dance music as a Christian and that he'd like to develop a stable of musicians/artists out there in clubland who are coming from the same place, ie, slightly liberal in their thinking."

Liz: So how did the label come about?
Steve: "Tim and I developed a friendship over the last year and in the summer we decided to set up a label with myself, Tim Riches and Becky Sarker as the three owners of DBass. So it's not so much 'the Abundant label' but it has very close links with Abundant because I'm quite key in both things."

Liz: What have you released so far on DBass?
Steve: "The first release on DBass was Synergy's 'Return To Ritual', which was in the summer of 1995. The second release was a 12" off that album and then the second album was IKON's 'Global Transmission'. The latest release this summer was a CD single by Home Truth called 'Surprised By Joy'."

Liz: What about the compilation album you were supposed to release last summer?
Steve: "It was put on hold. Unfortunately Word couldn't really stretch their budget due to the advances some of the artists were asking for, which was a real shame. I think it could have been huge, especially if we had got mainstream distribution as well. But that's still on the back burner, in the pipeline."

Liz: Tell be about the Synergy album because it was met with, shall we say, a fair bit of controversy when it came out last summer with the use of samples from theologian Matthew Fox's sermons.
Steve: "Well, I wasn't actually involved with DBass when that happened. However, I know that Tim is someone who has thought through his Christianity long and hard and unpacked various aspects which he felt haven't been helpful (to him) in the past. I think he found Matthew Fox's teaching on creation (really useful), ie, the whole under focus that the mainstream church has of green issues and the fact that God did create everything. But there are parts of Matthew Fox's theology that Tim would (not agree with). So just because they use a couple of samples and put his name on the album, it's like, 'Oh my goodness me, Synergy's into creation spirituality - dodgy, dodgy, dodgy!' And I know that Tony Cummings didn't like it, amongst others. But we have to be brave enough to look at and unpack other people's theologies and I think that Matthew Fox has got some very wacky ideas but I also think there are grains of truth in some of his teaching as well. I've listened to the guy speak and I'm not threatened by him, but at the end of the day he has a teaching that all wells lead to one river which (obviously contradicts with Christianity)."

Liz: But the fact that Synergy used excerpts from Matthew Fox's sermons would lead many to think that Tim agrees with a lot of his theologies, even though he only subscribes to certain ideas.
Steve: "I think that Tim is the man to talk to about that. But I would say as someone who knows him, that Tim is sound in his theology and his teaching and he's not sold out on Matthew Fox in any way at all. But I totally appreciate what you're saying."

Liz: What about the IKON album. I heard that the lead vocalist left.
Steve: "Goodness me, you hear all the rumours! The singer Rachel Modest basically disappeared and so we had to get a session singer in. I think that she was 19 years old, the summer came and she kinda disappeared and when we needed her she wasn't around. So we decided to part our ways for a while because of her unreliability. That's all there is to it. She hasn't left or anything - it just didn't work out. But she's a great singer."

Liz: What other projects have you got in the pipeline?
Steve: "The next project which is scheduled for the end of November is a gospel choir album. Different people have written tracks on it, eg, Zarc (Porter), Cameron (Dante), Martin Howes, Tim (Riches) and one of our DJs, Ferno. We're hoping to take that and our whole label stable to the States and get it all licensed out there as well."

Liz: On a mainstream or Christian label?
Steve: "Christian label because in the States they account for 10 per cent of the market place. So we're trying to hook up with a label and set up a distribution deal and hopefully take the club and some of our artists and do a tour of some American festivals next year, which'll be great fun."

Liz: What is your criteria for selecting bands/artists on your label?
Steve: "As far as musical parameters are concerned, DBass is a mainstream house label. Synergy is slightly harder-edged, IKON is kind of middle of the road house and Home Truth is more of a garage sound. Gospel is also a big part of what DBass is about (with the forthcoming gospel choir album). So basically it's gospel and house. I'm also really into the drum 'n' bass sound and hopefully we'll be putting something out early next year."

Liz: Are all your artists from Christian backgrounds?
Steve: "At the end of the day it's the music that's the most important thing. I mean, it's great if our artists are Christians because we have the same world view (as them) and all that sort of stuff, but we're not gonna cut people out who aren't Christians who are really into making gospel house music."

Liz: And are there many?
Steve: "Definitely. If you look at the mainstream market, there are loads of people doing gospel house tracks - it's quite a big musical genre. People love that uplifting vibe - the voice of hope."

Liz: Gospel house seems to be played a fair bit at Abundant.
Steve: "Yeah. Basically for me it's all part and parcel of the same thing. The whole Abundant/DBass thing is all about the vibe."

Liz: And what is the vibe?
Steve: "We've had the slogan 'pure vibe' running over the summer for Abundant. It's a redemption of possibly the music, redemption of club culture and all that kinda stuff. Abundant used to be in The Arches, two rooms of music, great fun, but we decided that we'd really like to hone it down a bit more rather than having all the music under one roof. So we've decided to have two separate club nights. Beatitudes at Ormonds in Mayfair is going to be 70's funk and disco on one floor and down-tempo eclectic Mowax sort of sound on the other. Secondly, Club Circa, which has gospel house on one floor and drum 'n' bass/garage and again down-tempo stuff all hashed together upstairs. The whole idea is to market the two clubs through some of the regular club advertising media, ie, Time Out, Mixmag, DJ, Muzik and try to make the whole thing much more accessible for those people who don't necessarily come from the church stable or come from Christian backgrounds."

Liz: So would you say the fundamental reason you started Abundant was for Christians as well as non-Christians to come and catch the 'pure vibe'?
Steve: "Definitely. But we also wanted to charge a fair price because a lot of clubs charge Â£10-Â£15 and make a fortune. We wanted to create a place where you could still enjoy yourself even if you weren't on an E or tripping, where you can socialize. Also (we wanted) to provide a safe place in London (to go clubbing) because a lot of places have really bad vibes - you have to watch your backs and stuff. There's a committee of about 12 of us in total who run the club and we meet together as a home group every week. So at the heart of the club there's a real evangelistic edge. As far as the Christian thing is concerned it's all about relationships, creating spaces for people to get to know each other and make new friends. There are so many lonely people in London coming out of a lot of these cultures, but especially in clubland. They get lost in subcultures which alienate them, if you like. I suppose we're trying to create space where they can find real friends and learn to be themselves again. They might even find God in that as well."

Liz: Finally, I understand that you're setting up another label. Can you tell me about that?
Steve: "Becky Sarker who used to work for Seven PM (who runs Jacket Records) approached me in the summer and said, 'Listen, I've heard that you're the man to set up a Christian label with', and I said, 'Okay, talk to me!'. Basically, we're trying to market a label totally for the mainstream underground dance world as Christians working in the music industries. The aim isn't for it to be music for the Christian market, the aim is that it's gonna be music for the mainstream. So it's a hobby as well as a business. But as soon as it starts to pay, we'll be there!"