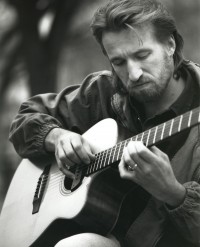 On 22nd November 1997 Billboard, the world's most influential music industry publication, ran a major story on Canadian Christian singer/songwriter Steve Bell. The article told how Bell's fifth album 'Romantics And Mystics' was to be distributed into the mainstream throughout Canada by Koch International. Little did Billboard or Steve Bell know that the following week a track from Bell's third privately released album 'Burning Ember' was against all the odds, getting maximum rotation 'A' list exposure on Britain's newly launched national Christian radio station, UCB Europe. The subsequent exposure of "Psalm 40" with its delightful acoustic, jazz tinged, setting of King David's timeless words has had importers scrambling to locate Steve and get in a supply of the "Burning Ember' album from which it's taken. When I spoke to Steve Bell in his Winnipeg home he was understandably flabbergasted that suddenly a track from a 1994 album was getting maximum Christian radio exposure in Europe. "It's astounding. It's the kind of thing only God can do. I vaguely remember visiting a little stand at GMA in Nashville in '94 - it was the only time I've been - and putting a copy of 'Burning Ember' into somebody's hand there. It really was a case of casting bread upon the water..."

So, was "Psalm 40" an important song in Steve's repertoire? "Very much so. I still often sing it in concert. That song gets a lot of requests. It's very important to me - in many ways it's my testimony. I'd grown up in a home surrounded by Christian ministry but felt dislocated from church life. I played in club bands for 10 years. Then in 1989 came a six-month period when I had an unbelievable sense of the presence of God. I realised that God had been there all the time patiently waiting for me to come to him."

Citing his mother as his earliest musical influence. Steve was brought up with music playing in his family's gospel band. The son of a prison chaplain, Bell learnt his guitar licks from inmates in Drumheller, Atla Prison and Stony Mountain penitentiary. Following high school he played nightclubs for about 10 years and then in 1988 had that monumental spiritual experience. In the autumn of 1989 Bell was invited to accompany Father Bob McDougall. a Jesuit Charismatic priest, to provide music on a ministry trip to ^ India, Thailand and the Philippines. Initially reluctant to go, but, urged on by his wife Nanci, he took the step of faith. He returned from the trip convinced that God was calling him simply to sing and play music.

Soon after, Bell recorded Comfort My People' and people began requesting copies of it. "Suddenly. I had a ministry," said Bell. He worked at Canada's Youth For Christ for three years leading urban youth worship sessions.

Throughout his solo recording career, Bell has managed to accomplish the rare task of appealing to Protestant and Catholic, charismatic and conservative groups. And it's not just because of his lyrics. His acoustic guitar work and sinuous tenor voice have earned him praise from critics from a wide range of publications, secular and Christian.

Things weren't always easy. In 1992 Steve released his second album (like all his albums on his own Signpost Music). 'Deep Calls To Deep' was different from the minimalist acoustic folk of 'Comfort My People'. "It was full of synthesizer and keyboard pads. I was told by many people what a bad album it was. I had spent 30 grand and left a job at Youth For Christ. Part of it was ego and hurt. The other part was sheer terror, huge debts and asking. "What if this thing bombs?" I remember one night being restless, not being able to sleep, and my wife just had it and said, 'Steve, this is sin. God called you to sing and play. You're doing it. Believe it or quit.' That was such a profound moment in my life.

In 1994 came the lilting acoustic gospel album 'Burning Ember' and the following year he recorded a Christmas album, "The Feast'. His following continued to expand throughout Canada (at the last count Signpost Music have shifted a startling 70.000 albums) and a newspaper called him "one of Canada's top selling independent artists." Bell still found time to make occasional overseas trips, to the US. Poland and even, thanks to an invitation from a Catholic Renewal group, to Southern and Northern Ireland. But it was in Canada that Steve's popularity continued to grow and he was approached by the Penguin Music Group (PEG) to put his latest album "Romantic And Mystics' into mainstream music shops through distribution by Koch. The Winnipeg Free Press asked Steve to describe 'Romantics And Mystics'.

"There's more of a band feel, more production, more groove tunes. It's probably the most intensely personal album I've ever done. People may not see this as worshipful as the other ones. I cover a Bruce Cockburn song, 'Can I Go With You'. The kick off song is 'Dark Night Of The Soul', adapted from the poem The Dark Night by St John of the Cross. He was a Christian mystic who wrote profoundly about the joy of abandoning oneself and attaching to God. It's almost disturbingly sensual when he talks about his spirituality but I think it fits. In the last five to six years, I've been reading more of the ancient material and less of the contemporary. It started when a friend of mine joined the Orthodox Church. I started delving into some of their roots, their traditions and we realised there's this incredible depth and beauty to the ancient Church. That sparked for me an interest in reading some of the ancient liturgies and discovering all these incredible treasures. I discovered these people who were profound thinkers because their faith was quite relational with God, and mystical.

Steve is aware that the word "mystics' on his new album might cause a problem or two in the more conservative parts of the Church. "I hesitate to use that word, because people immediately think of New Age. That's unfortunate because (mystical) is a very Christian word. We speak of the mystery of the Trinity or the mystery of Christ in you and the hope of glory. A mystic is basically someone who is taught by God.

"I've written some love songs on there, some painful songs about relationships and then there's some more on the worship end. You realise it's all kind of telling the same story, that often our relationships here on earth are a mirror of our relationship with God, even though it's poor. I've learned more about God by being a dad and a husband than I ever did by reading books."