Mike Rimmer met up with Florida's modern rock band STORYSIDE:B to talk about surfing and the gift of encouragement. 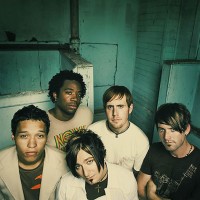 Cross Rhythms radio turntable hit "Miracle" by Florida rockers StorySide:B brings into the spotlight yet another excellent American modern rock band. The band got their start via a TV talent show. The runaway success of US TV's American Idol talent contest has also spawned similar searches for new sounds in Christian music. One such story is StorySide:B, whose founders Lucio "Lu" Rubino and Jordan Mohilowski formed the duo that placed second in the 2003 Exalting Him programme airing on Trinity Broadcasting Network. After adding bassist Ron McClelland, guitarist Matt Lande and guitarist Preston Pohl, the group shopped its sound to Nashville labels, eventually meeting Gotee president Joey Elwood and founder Toby McKeehan. "We met backstage after one of (Toby's) shows and played some tracks for him on the tour bus," Rubino says.

The group signed with Gotee in spring 2005 and released their debut project, 'EverythingandMore' in the US on 26th December of that year. Produced by Rubino, who has his own studio, The Fish Tank, and mixed by J R McNeeley (Relient K, Jeremy Camp), the project features Creed-tinged modern rock tracks "Hold Me Down", "It's Not Over" and "Miracle". When I meet them, the band are in high spirits and eager to introduce themselves. They hail from St Augustine, Florida. "Right on the beach," says Robino.

So obviously they're all great surfers, right? "Err.no," confesses bassist Ron McClelland. "They make fun of me," he moans. "Ron swims like a lead boot!" confirms Lu. So how would they fare against that other great surfing band in Christian music? The band that taught Delirious? to surf? Switchfoot! Jordan winces, "Switchfoot! I've seen them on a surfing DVD. Lu's really good but those guys.that's all they do I guess!" The singer's confidence isn't rocked in the slightest, "I'll take them. Let's do it! The difference is, they're West coast. We're East coast. East coast surfers are better because we have to deal with smaller waves. So when we get to the West coast and we actually have waves, we tear it up!" I'd like to be sitting on a beach when the battle of the surfers takes place, preferably in California. We can all dream, I guess!

So from the waves and the boards of the beach to the sound waves and the mixing boards of a recording studio, why are StorySide:B doing what they do? Lu explains, "I think all of us have individual stories but we're all very passionate about playing music. We feel God called us all from a very early age to do what we do. We feel blessed and honoured to be able to play music and have God's love flow through that. We love God and we just want to bring that out there and show that we have fun with what we do and what we're called to do." 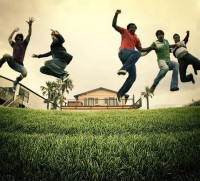 He continues, "I think one of our main things is, if you look at us we're all kind of diverse in the way we look. Musically we're diverse too. In the Christian community, you see a lot of judgment and intolerance of others. I think one of our messages is that we're trying to break down those walls and make sure that we're encouraging each other rather than putting each other down. Because you don't know when there's that person that's on the edge and you can push them one way or the other. You can say a few words and God just juices up those words and you could just push them into a good way of life, rather than doing something that's not necessarily positive."

I guess you'd describe it that the band have a ministry of encouragement. It's even summed up in the group's name. Jordan explains, "Once again it's the whole non-judgment thing. There's the A side of what everybody's going through and so many people point their fingers like, 'Look at that guy! He's goin' to hell for that.' Or something, you know? Instead of looking at what he's going through and really ministering to him. The explanation I always say is you can see somebody with a crummy car or something. Before you make fun of him that guy may be working and that might be the best thing that he can get. And you don't know what he's going through in life, you know? So look at the B side of things. Nobody's to judge anyone." Matt chips in, "God works through our lives individually and you have to have grace for everybody."

So what is it that has brought the band to this place with such a strong stance on non-judgment and a heart to provoke believers to encourage each other? Lu explains, "It's all happened to us individually. We've been around the Christian community so we've seen that happen. It's something that we just believe in. We believe in encouraging people and just building people up." Ron adds, "It's really weird because we've all come from such different backgrounds but it's really a God-thing." Preston elaborates, "That's part of it really. We've all come from such different backgrounds. How can you put people in a box? You can't. Everybody is different."

Lu thinks back and shares, "I used to work in youth ministry and I would lead worship. I would see people get kicked out of the youth church in the middle of the service, or people would get turned away and I'm like: this is where they should be! You shouldn't be sending them away from here because what they're gonna do is just get into trouble; go do something bad, you know? They would be kicked out for maybe talking in the service or disrespecting a youth worker. But even at that point I think that's when you take them to the back or something and minister to them. Talk to them about, 'This is why you do this or that.' Not, 'Alright, go home! See ya later.' Just literally kicked them out! That's just not right to me."

The inspiration for their brand of encouraging music and message was born in the frontline of youth ministry where they witnessed injustices and wanted to make things better. Lu remembers, "You could see people treat some teenagers differently than others." The band go on to describe a scenario where all the untrendy good teenagers were okay but the teens who really needed help, the ones who may be louder or more edgy in the way they acted or dressed would be unfairly treated. Ron explains "They wouldn't get disciplined the same way. If it was a kid that was a staff brat, some leader's son, they could be talking. But they'd be told to be quiet but they wouldn't get kicked out. But if it was a kid from a rough neighbourhood or something and looks like a punk they would just tell them to leave a lot of times."

Lu is still passionate about the issue now, "You gotta plant seeds in everybody. No matter what." So does the band have a ministry to the kids that don't fit in? Lu doesn't see it that way. "I'm not going to really say that any kids 'don't fit in'. There's a place for everybody." There are murmurs of agreement from the rest of the band. Ron asserts, "We all fit in. Everybody." Jordan agrees, "Everybody fits in. There's a place for us all."

It was a wonderful and tuching story. I cried.