Stryper: The cost of pioneering

Christian heavy metal pioneers, STRYPER were one of Christian music's biggest ever selling acts and the rumours that the foursome might reform created excitement in Christian rock circles. Tony Cummings assesses the band's influence. 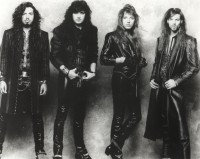 Stryper never hit in the UK. Yet in their seven years of existence (1984 to 1991) this foursome from Orange County, California, became one of the biggest selling, and certainly one of the most staggeringly unlikely, acts in the history of Christian music. Stryper were in many ways the DC Talk or Delirious? of their era. They almost single-handedly destroyed the self-limiting thinking that if you sing songs that boldly proclaim faith in Jesus you're forever destined to play gigs in church missions and/or school gymnasiums. Stryper filled football stadiums with fans, recorded for a blatantly secular record company and yet were so, defiantly, the "Jesus freaks" of their era that their highly publicised stage act included throwing Bibles to the baying, swaying thousands who came to see them.

They also were the band that established once and for all that Nashville's perspective of contemporary Christian music, as a soft pop alternative to country, Southern Gospel or black church was woefully myopic. There had been Christian hard rock bands before Stryper arrived -Chicago's the Resurrection Band were pounding out some anvil heavy riffs a decade before - but it was Stryper who catapulted Christian metal out of a niche within a niche into the American Hot 100. Michael Sweet (vocals, guitar), Oz Foxx (guitar), Tim Gaines (bass) and Robert Sweet (drums) were originally called Roxx Regime and did the pre-requisite years of dues paying. Then in 1984 they were signed to Enigma Records, a small Californian secular label. Robert Sweet reminisced in HM magazine, "They said there's one thing they wanted us to do: to change our name. For two weeks I didn't know what to do, because the minute you change your name, you lose your following. People just don't know who you are. I started thinking, 'My gosh, what are we going to call ourselves?' Everything in Roxx Regime was already yellow and black striped, so the name just hit me to call ourselves Stryper, but to spell it with a y instead of with an T, so we wouldn't be mistaken for stripper. With the Isaiah 53:5 logo... We used to have these Bible studies where we used to rehearse, and they got too big, so they had to stop. Can you imagine that? Having a Bible study that was so big that the police tell you, you must stop! One night we were looking through Isaiah 53 and we found this verse, 'By his stripes we are healed,' and we thought, 'Gosh, it talks about what Christ went through for us and it says the word 'stripes', and there's stripes everywhere,' so we put it on there." Robert's rather gauche explanation as to how a Bible phrase indicating the mystical healing power of the savage whip marks of the Son of God's death by torture was used to put a spin on the striped spandau costumes of a glam metal band in many ways exemplified the huge tensions that were to exist over the next seven years between Stryper and large sections of the American Church. Glam music had evolved largely in Britain where acts like David Bowie, the Sweet and T-Rex in a gesture of decadent flamboyance, brought shiny costumes, make up and more than a hint of androgynous trans sexuality into the image of pop and rock. For Stryper to sport body clinging costumes and enough make up to transform good looking young men into pouting androgynous men/women was a staggering phenomenon for most Christians to come to terms with.

By the '80s, though pockets of fundamentalism and Calvinism in the body of Christ still existed which confused personal taste with personal holiness and denounced all Christian pop/rock involvement as worldly/sinful, many deeply committed Christians expressed opinions that for all their Bible-thumping zeal, Stryper were culturally a bridge too far. Using make up and clothes to confuse gender was for many Christians biblically unacceptable. For their part, Stryper were clearly not the mincing homosexuals or drug imbibing decadents of fundamentalist stereotypes. Nor were the band prepared to keep their faith a muted undertow to showbiz careers. Stryper's songs, almost from first to last, were bold anthemic declarations of commitment to Christ and their packed concerts exercises in ministry with a legendary gig in Canada where an entire audience stood to receive Christ. Despite unprecedented (four gold, two platinum) sales success with albums like 'Soldiers Under Command' (1985), To Hell With The Devil' (1986) and 'In God We Trust1 (1988) the bubble that was Stryper was bound to burst.

The band were vilified not only by a Jaundiced secular media who found the whole idea of no groupies, no drugs, pray-before-you-go-on-stage rock evangelists utterly confounding their rock music decadence stereotypes; the continual criticism from within the Church eventually took their toll with the band. Stryper's Christian lifestyle buckled under the temptations of life on the road. Alongside their spiritual deterioration came another blow. The whole glam fad began to disappear from the charts and the football stadia. New styles and new looks in pop suddenly made eye shadow and lurex an embarrassing anachronism. In 1990 Stryper made a disastrous attempt to reinvent themselves, dropping the costumes and all references to Christianity. But their sole EMI album flopped and the band broke up.

But their musical legacy lived on. Seemingly hundreds of other Christian metal bands (with or without glam trappings) sprang up during Stryper's glory years and those bands formed the basis of what was to become the hard music/alternative rock underground which today coexists alongside Nashville's CCM industry. It could be argued that just about every alternative rock, grunge, doom and industrial Christian band of the last decade owe something to Stryper. They were instrumental in producing a paradigm shift in the Church's attitude towards rock music and the acceptance of the idea that music could be very loud, feature pumping axes and hard rhythms and still glorify Jesus. They were also forerunners to where DC Talk, Delirious? and probably a heap more, are taking Christian music into the millennium, beyond the confines of subcultural insularity and into the mainstream marketplace. That move will, as Stryper's history demonstrates, produce its own tensions and temptations, both from a rock business prepared to stroke rock stars' egos and offer the chosen few fame and money beyond the wildest dreams and the Church still infested with sufficient numbers of Pharisees to make unloving criticism inevitable even if a band eschews eye shadow and on-stage bumps and grinds.

In their recent simulcast on the radio/internet Michael Sweet told the many thousands of Stryper nostalgists anxious to see the band do a KISS and reform, "I fFeel when the right time comes for us to get back together, if that time comes, that we will all know it. We'll all be in agreement and it's something that will happen -just like the old days when God made it happen. He put us all together and it just happened. He did it. I think it will be the same way because of the way he formed the group and the type of group that we were. I think its going to be one of those miraculous get-togethers as far as God putting it back together. We're all going to know it and say, 'Wow, this is it, it's time.' At the moment, I just don't know -1 haven't heard that from God."

Whether the much-discussed reunion does become a reality only time will tell. One thing is certain however. The path Delirious? and DC Talk now walk in singing songs about Jesus was once trod by four Orange County glam metallers.